GCM challenged to pull out of Phulbari coal project 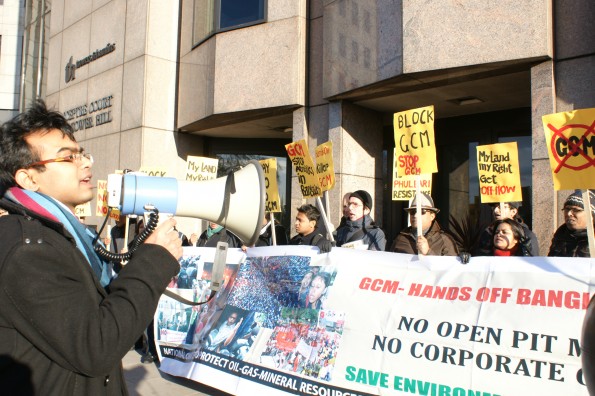 If you do not leave now, you will be beaten, tear-gassed and fired upon. If you die, your family should be happy for not obstructing the path of our profit-making spree.

This may seem harsh but believe it or not, these things have happened in the green countryside of Bangladesh. A UK-based company, GCM Resources PLC, financed by global hedge funds, is trying to displace more than 100,000 people from a very densely populated, fertile region called Phulbari in Bangladesh for extracting coal that they propose to export for their profit.  Farmers, teachers, agricultural workers, businessmen, endangered indigenous ethnic minorities, will be forced to leave their homes if this mine goes ahead. People in Phulbari are resisting. They were brutally repressed on 26th August 2006, when 3 of the protestors were killed and more than 100 were injured.

People from Phulbari need your solidarity!  Please join the blockade against the plunderers at GCM

From: Department of Housing (On behalf of People of Bangladesh)
TO: GCM RESOURCES PLC, UK.

We regret to inform you that your home in Bangladesh has been taken over:  Effective Immediately

On behalf of people of Phulbari, Bangladesh, we serve you this eviction notice to leave our country at once. You have been charged with provocation to violence, corruption, and political manoeuvring to get a deal that is disastrous for our people, our environment and our national interest.

WE SHALL PROTECT OUR RESOURCES WITH OUR LIVES!!

NO OPEN PIT   NO FOREIGN COMPANY   NO EXPORT

GO HOME GCM!  YOU HAVE BEEN EVICTED!!