OT Watch / CEE Bankwatch Network / London Mining Network / urgewald press release
4 July 2013
Ulaanbaatar – A group of Mongolian herders submitted today an official complaint to the Project Complaints Mechanism of the European Bank for Reconstruction and Development (EBRD), hoping to initiate a process of evaluation of the adverse impacts on their health and livelihoods of two mining projects financed by the international public lender. 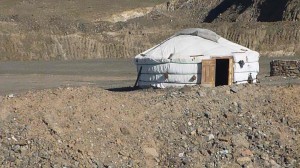 The mining boom in Mongolia has raised high expectations for lifting the country’s population out of poverty. However, pastoralist communities now find their traditional lifestyle threatened with extinction.
The EBRD has approved investments for more than one billion US dollars in the Ukhaa Khudag coking coal mine [1], the Oyu Tolgoy copper and gold mine [2], as well as several more fuel and metal resources projects [3] in the South Gobi region that benefits from its closeness to China. Export of raw materials from these mines was meant to be done by rail. However, continuing delays with the rail project resulted in a several desert routes that fragment and spread dust over pastoral land.
The complaint is submitted under the EBRD’s Project Complaint Mechanism, and seeks redress and compensation for the unmitigated negative impacts and damage caused by transportation of the commodities to the Chinese market. Beyond the damage inflicted by the roads, there are further impacts caused by the construction of mine-supporting infrastructure, such as water pipelines, river diversions, worker camps, airstrips and electricity transmission lines.
Ms Ts. Tsetsegmaa, Chair of Shuteen Gaviluut NGO, said on behalf of the group of complainants “Companies do not recognize the fact that reducing the size of pastures, as well as fracturing and contaminating them with dust and noise, is having a negative impact on our livelihoods and health. Internal parts of animals we raise are no longer consumable, meaning we have lost a significant part of our traditional diet. Soon animals will completely lose their commercial value. Most herding families are forced to reduce the number of livestock bringing it down to less than the number needed for subsistence. We have nowhere to turn now.”
The grievances of the herders are a result of inadequate public consultations and impact assessments for the two projects: the Ukhaa Khudag Environmental and Social Impact Assessment (ESIA) focused on the advantages of the railroad over the road infrastructure, while the Oyu Tolgoi assessment is retroactive, lacking operational plans, and focusing on mine construction at the time when construction is almost completed and production is beginning.
Sukhgerel Dugersuren from OT Watch said “Mongolian nomads are land-based mobile people. Not recognizing their right to the pastures, which to date are regulated by customary tradition, and not measuring impact on nomads’ livelihoods based on reduced, fractured, contaminated pastures by mine roads is just not acceptable. It is not compliant with the accepted international norms and standards set to protect land-based people. Energy Resource has a dirt-graded road, blacktop road and a planned railroad. Oyu Tolgoi has a dirt or graded and plans a blacktop and a railroad. The roads all go from north-to-south to China. All animal migratory and grazing routes go from east-to-west. Companies are not good at putting adequate passages in their roads blocking access to water and pastures for livestock and wildlife.
Richard Harkinson from London Mining Network said “The herders’ situation has been severely compromised by the lack of engagement by international public banks and mining companies with impacted and displaced communities. These mining projects will inevitably exacerbate competition for scarce water resources, massively increasing the vulnerability of already quite marginalised communities”.
Contacts:
Sukhgerel Dugersuren, OT Watch, +976 99,185,828, otwatch@gmail.com
Richard Harkinson, London Mining Network, +44 [0] 7563238179, research@londonminingnetwork.org
Fidanka McGrath, CEE Bankwatch , fidankab@bankwatch.org
Regine Richter, urgewald, 0170-2930725 regine@urgewald.de
Notes:
[1] In March 2010 the bank approved a USD 180 million loan for the UHG mine, see Project Summary Document http://www.ebrd.com/english/pages/project/psd/2010/39957.shtml, after an equity investment of up to 30 million, see PSD http://www.ebrd.com/english/pages/project/psd/2009/39820.shtml
[2] In February 2013 the EBRD approved financing of up to USD 400 million, see the PSD http://www.ebrd.com/english/pages/project/psd/2012/41158.shtml
[3] Additionally in December 2009 the bank approved a USD 35 million loan to Leighton Mongolia for equipment for contract mining of the UHG mine, see PSD http://www.ebrd.com/english/pages/project/psd/2009/40664.shtml and in December 2011 it approved a loan of USD 350 million to finance the construction of the Tsagaan Suvarga copper mine project, and a USD 100 million stand by facility for the same project, see PSD http://www.ebrd.com/english/pages/project/psd/2011/41547.shtml;
Background:
on EBRD and mining in the South Gobi, see:
http://bankwatch.org/publications/spirited-away-mongolias-mining-boom-and-people-development-left-behind
on Oyu Tolgoi see:
http://bankwatch.org/publications/ngos-suggest-key-recommendations-oyu-tolgoi-copper-and-gold-mine-project-mongolia
Photos and maps available. (Contact: research@londonminingnetwork.org)