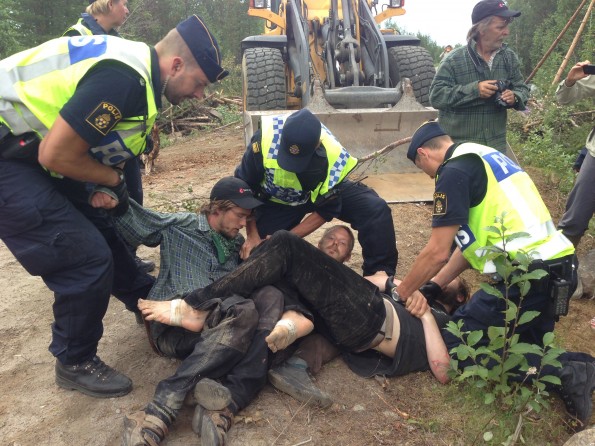 Photo: Henrik Blind
Press release from National Swedish Sami Association
Today Swedish police arrived in numbers at Gállok, Jokkmokk, Sweden to forcefully remove a group of peaceful protesters.
The activists are taking a stand against Beowulf Mining PLC and its Swedish subsidiary, Jokkmokk Iron Mines AB (JIMAB) who are currently planning to carry out test drilling for iron ore in the area.
The area, close to the World Heritage Site Laponia, has been used since time immemorial by Sami reindeer herders. The environment is threatened; people’s livelihoods are under threat as is the water supply of a massive area of Northern Sweden.
The activists set up a camp in the area at the beginning of July 2013. They built two wooden towers to block access to the drilling site. Today 12 police officers, with several vans and a helicopter backing them up, brought a tractor/digger to remove the activists and to tear down the towers. The police used a lot of unnecessary force, dragging the activists along the ground. The activists were passive and did not resist.
JIMAB has on repeated occasions broken the law by carrying out work (clearing, terrain driving, destruction of private property) which is not stated in its work plan. The Swedish Mineral Inspectorate, Bergsstaten, have recently given the company a warning that their permission may be withdrawn if another violation is noted.
We note that the police have done nothing about these violations, in spite of several, and repeated, reports from locals and other protesters.
Photographs are available. Please contact Nilla Märak: +46730543326  for more information.