BHP Billiton and the Algerian Regime 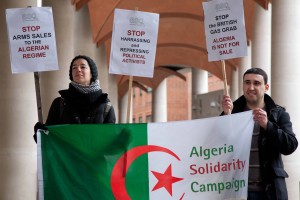 A new report from Platform and the Algeria Solidarity Campaign has criticised the role of oil and gas companies and the UK in financing the military dictatorship in Algeria that has quashed democratic dissent for many decades.
In a 2013 report, Amnesty International said that the Algerian authorities continued to restrict freedoms of expression, association and assembly, dispersing demonstrations and harassing human rights defenders. Human Rights Watch have reported on how the authorities relied on repressive laws and regulations to stifle dissent and human rights activities by increasingly clamping down on efforts to form independent unions and to organize and participate in peaceful protests and worker strikes. Authorities have blocked demonstrations, arbitrarily arrested and prosecuted trade unionists for the peaceful exercise of their union activities.
The report Reinforcing Dictatorships – Britain’s Gas Grab and Human Rights in Algeria released today shows how:
* British foreign policy towards Algeria has been shaped by fossil fuel and arms interests
* Britain is pursuing a “gas grab”, in which gas supplies are locked into the British grid, regardless of consequences for Algerians
* Britain has been expanding its arms sales to Algeria, despite intense human rights abuses and fraudulent elections
* BP is intensifying its close relationship with the Algerian regime
* Amidst major corruption scandals, Britain has lobbied for better deals for British companies. 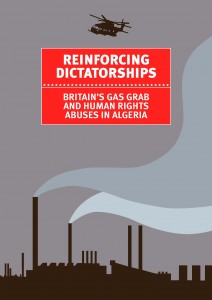 One of the companies that is named in the report is London Stock Exchange-listed mining giant BHP Billiton. BHP Billiton has a 45% interest in two developments: the ROD integrated oil fields in the Berkine region which are operated by a Sonatrach-ENI joint venture and the OHANET wet gas development, operated jointly with Sonatrach.
The report was launched at a protest of a UK-Algeria investor summit at the London Stock Exchange, with author Hamza Hamouchene of the Algeria Solidarity Campaign saying:

The Algerian regime, lacking in popular legitimacy, is seeking to deepen its relations with Western capitals such as London. Deals being made at this investor conference in London directly contribute to the longevity of an authoritarian and repressive regime at the expense of the human rights of the Algerian people. The British establishment is prioritising its fossil fuel interests and arms industry at the expense of pro-democracy movements in Algeria. The British government should have learnt its lesson from the events of the Arab uprisings.