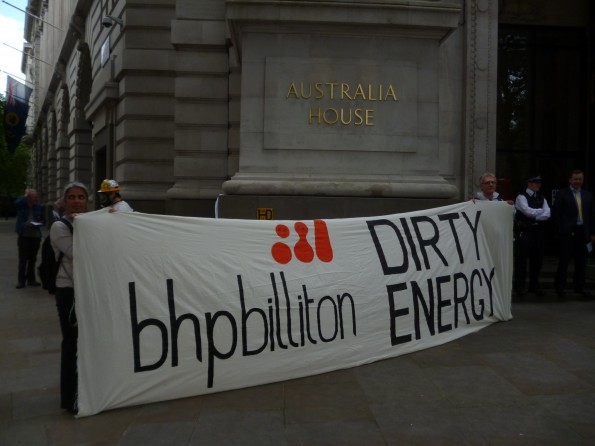 The world’s biggest mining company, BHP Billiton,held its AGM in London on Thursday 23 October. London Mining Network (LMN) worked with LMN member groups Coal Action Network, Coal Action Scotland, Colombia Solidarity Campaign, Down to Earth, War on Want and WDM, and with People and Planet and Fossil Free Universities groups, to host representatives of Colombian communities affected by the company’s part-owned Cerrejon coal mine and Indonesian organisations working to stop BHP Billiton develop a massive new coal project in the rainforest of Central Kalimantan.
They attended the company’s AGM to tell shareholders about the destruction of Colombian communities and livelihoods by the Cerrejon mine and the potential impacts of BHP Billiton’s proposed mine in Indonesia. There was an article about the issues in the Guardian. They spoke at a public meeting at SOAS in London, having been prevented at the last minute from speaking at University College, London (UCL), which is sponsored by BHP Billiton. Students in Fossil Free UCL were pretty upset about this. We tried to arrange for the visitors to meet with UCL officials, but we didn’t get very far.
Then our visitors headed off around the country, to the University of East Anglia in Norwich; Sheffield University; Durham University, Newcastle University, then up to Scotland where they spoke at Glasgow University and in Edinburgh. They met with community groups fighting new opencast coal projects in northern England and southern Scotland, and with Members of the Scottish Parliament. Returning south, they met with Bangladeshi groups working to stop UK-listed GCM Resources construct a massive opencast coal mine at Phulbari in Bangladesh, with members of London’s Latin American community, students at Oxford University Fossil Free, and parliamentarians at Westminster.
Take action!
Stop forced displacements by Cerrejon Coal in Colombia – sign letter to CEOs of Anglo American, BHP Billiton and Glencore.
Sign petition calling for BHP Billiton to get out of Borneo!
Click here for all our articles on the Cerrejon coal mine in Colombia. Click here for more information on BHP Billiton’s plans for Indonesia and here for videos about the financing of this destructive project.