At the Coalface: Ten more years of UK coal burning a lifetime on the ground 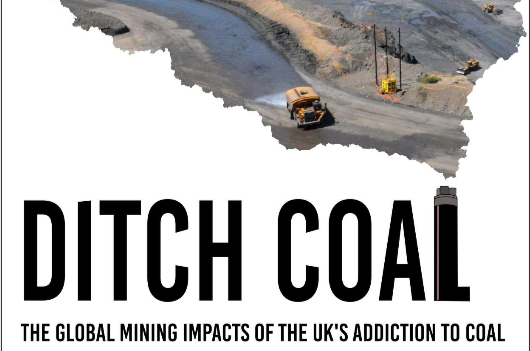 Ditch Coal is the new report from Coal Action Network

Following the UK Government’s plans to phase out coal-burning power stations by 2025, Coal Action Network have released a new report tracing and examining the places coal burned in the UK is coming from. And while the Government’s announcement hints at a step in the right direction, the prospect of ten more years of demand will still prove deadly for many local communities.

In October, London Mining Network (LMN) hosted a visit from Samuel Arregoces, an African-Colombian community leader from the village of Tabaco, which was evicted in 2001 to make way for the expansion of the Cerrejón coal mine. Nearly fifteen years on, the village is yet to be resettled.

Samuel’s visit focused on raising awareness of UK and European mine investment and ownership, as the Cerrejón mine is financed by a range of European investors, and is jointly-owned by three London-listed companies: BHP Billiton, AngloAmerican and Glencore. However, these aren’t the only UK links to the mine that drove Samuel from his home; Cerrejón coal was also being burned in UK power stations throughout his visit.

According to a new Coal Action Network report (supported by LMN and Stop Mad Mining), one-third of all coal imports to the UK are from Colombia. As one of the country’s largest coal mines, Cerrejón is one of the gaping holes in the ground that our coal supply has come from, imported (on paper, at least) via a Falkland Islands tax haven, before landing on UK shores.

Over the past thirty years in La Guajira, where the Cerrejón mine is located, Samuel and twenty thousand other African-Colombian and Wayuu Indigenous peoples have been forced from of their traditional homes to make way for the ever-growing mine. In fact, just weeks before Samuel’s UK visit, another village – Roche – was evicted by Cerrejón, with others facing imminent eviction.

Five Indigenous communities have ceased to exist entirely after the forced dispersal of their villages. As Danilo Urrea, of CENSAT AGUA VIVA (Friends of the Earth Colombia) told us during the same trip which brought Samuel to the UK, ‘more people have been displaced by the extractive industries in Colombia, than by the drug war.’ 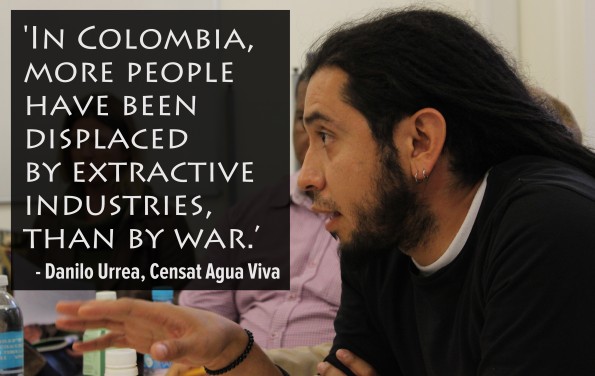 “The expropriations and evictions,” outlines the CAN report, “were carried out by Cerrejón using intimidation, forcing the communities to hand over their land for laughable prices, abusing their dominant position, and relying on the complicity of the State authorities.”

The stories from the UK’s other main international coal sources – Russia and the USA (accounting for 43% and 19% of UK coal imports, respectively) – don’t paint a much better picture. In Russia, Indigenous Shor and Teleut villages have faced similar displacement in the Kemerovo Oblast region, with homes of villagers who have refused to sell or move on becoming victims of arson.

In fact, whole Shor communities have had land rights and governance powers transferred to neighbouring towns, cutting them out of decision-making over their own lives. The UN-enshrined principle of free, prior and informed consent is ignored completely in the Kemerovo Oblast, as coal companies and state forces have worked together to push Shor and Teleut communities off of their lands. They have done so to ensure the UK (and China – as Russia’s two largest coal buyers) can continue to burn the dirty fossil fuel for the coming decade.

Meanwhile, in the US, the Appalachian Mountains are being decapitated, through a mining process known appropriately as ‘mountaintop removal.’ The consequences of such disruption on local ecosystems are immense, and water has become undrinkable in some affected areas. Cancer rates are 5% higher for those living in close proximity to mountaintop removal sites, while incidence of birth defects are 42% above average.

What is clear, is that the companies burning coal in the UK have no accountability with regard to where they source their coal from. It’s all the same to them, as displaced Colombian villages, burned-down homes in hold-out Shor communities, and Appalachian mountaintop removals, are all ‘externalities’ for someone else to worry about. And a ten-year phase out is the UK Government’s way of echoing this same attitude; ‘what has happened to the coal before we burned it is someone else’s problem; we’ll give it up when we’re damn-well ready!’ Even with the closure of Kellingley Colliery, the UK’s last deep pit coal mine, in December, no one is talking about the inevitable influx in coal imports that are already starting to fill the gap, nor the conditions under which that coal is being extracted abroad.

There is still considerable debate as to whether ten more years of UK coal can keep our carbon emissions within acceptable limits, but we know now that ten more years is deeply incompatible with any understanding of environmental justice. As for centuries before, we are outsourcing the costs and consequences of our hyper-development to those who see the least of its benefits. Our transition to a sustainable energy future must be a just one and account for those at all points in the supply chain. We must be actively co-creating energy alternatives with those whose lives have been damaged, but also those who’ve been forced into dependency on the very industries we are phasing out. 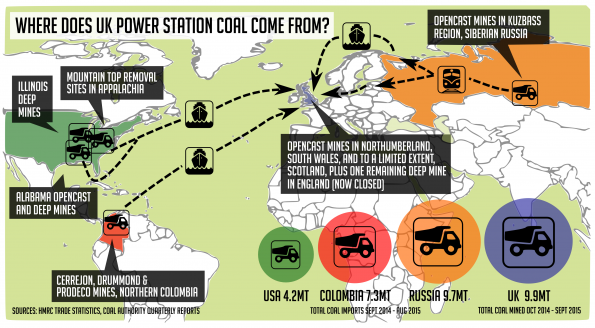