London's mining history, from colonialism to apartheid: Why Rhodes Must Fall 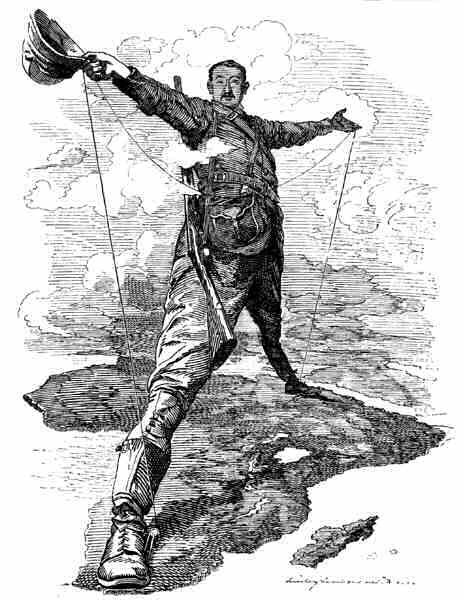 From Cape to Cairo – Rhodes` vision of the conquest of Africa. He got as far as Northen Rhodesia , modern day Zambia, and through his agent and companies influenced mining development as far as Katanga now in DRC.
by Kerima Mohideen and Richard Harkinson
One Sided Debate
It is disturbing to see how many politicians, academics, journalists and now funders have ganged up against the student led Rhodes Must Fall (RMF) Campaign. The statue will now remain in place and Oriel College has called off its six month consultation on the issue after donors threatened to withdraw their support. A small concession may have been won as the statue may have a plaque explaining its context although it will remain to be seen as to what this will say. The debate played out in the media has been one-sided – in fact it can hardly be described as a debate with so many heavy hitters weighing in on the side of keeping Rhodes and the outcome being decided when `money talks`.
What has been missing in the public discussion throughout is any real sense of Cecil Rhodes` historical role and how this impacts on the present. Rhodes is simply presented as a flawed but pioneering figure – the `yes he was a white supremacist but…` argument and excused on the basis that there were others like him. Chris Patten, chancellor of Oxford publicly told the students that if they did not like Cecil Rhodes they should “think about being educated elsewhere”. Mary Beard, the feminist classicist weighed into the debate early on suggesting that students need to toughen up and develop a quality of “unbatterability”. One wonders how these statements translate into policies of diversity and inclusion at a university said to be attended by less than 30 black students in a single year.
Both Patten, Beard and others have deliberately conflated the RMF campaign with other student campaigns for safe spaces and accuse its spokespeople of wanting to erase history and limit freedom of expression. Andrew Anthony argues in the Guardian that the RMF campaign has come to symbolise “a new intolerance of words and images that is sweeping across British and American Universities, a zealous form of cultural policing that relies on accusatory rhetoric and a righteous desire to censor history, literature, politics and culture.”
However, it is the RMF campaign that is being silenced and it is apparently Patten, Beard and Anthony who are uncomfortable with what the students have to say. They acknowledge that “our cities are built with the proceeds of activities, the slave trade and so on, which today would be regarded as completely unacceptable” but while they are willing to discuss this history, they do not want these discussions to translate into demands for action – an apology, reparations perhaps or the simple symbolic removal of a statue. The RMF students are not asking to censor history but to make audible long suppressed other voices and in the process making universities more challenging and inclusive spaces where the impact of British imperialism on the lives of others can be examined and responded to.
Behind the `bad boy but…` image of Rhodes is a story to tell of black lives ruined for over one hundred years and the ongoing neo-imperialism that continues to blight those regions touched by pioneering spirits such as his. Cecil Rhodes held black lives cheap. They were the inconvenient occupants of land he wanted and the cheap labour upon which he built a British mining empire. Ntokozo Kwabe from the RMF campaign said that the decision of the university to abandon the consultation simply “reminds us that black lives are cheap at Oxford”. 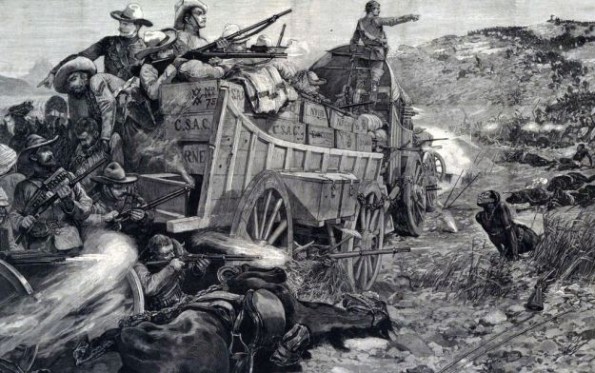 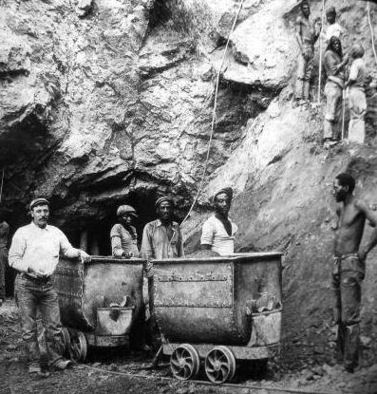 Race, class and gender intersect. In the hundred and twenty years since Rhodes` legislation, thousands of African men, women and children have subsidised the wealth of the shareholders of de Beers, AngloAmerican, Goldfields (now Sibanye) and numerous other mining companies through their labour both low-waged and unwaged.

Southern African mines continue to be dependent on migrant black labour. The mineworkers` families in the rural communities they have left behind, in many cases situated in countries much poorer than South Africa (Mozambique, Botswana, Swaziland and Lesotho) are still forced to bear the cost of their care when they are laid off sick or injured. According to public health research at Witwatersrand University, almost one in three workers suffered from silicosis and tuberculosis was widespread. The limited health care that the mining companies provide does not extend to the villages the mineworkers came from and inevitably, when they become too sick to work they are `retired`. Lung disease caused by mining may also develop after retirement. Dying men are forced to go to court to claim the compensation that is their due and may never see it awarded. In several separate cases, thousands of miners have launched lawsuits against major gold mining companies for negligence that resulted in them contracting lung disease. The lawyer representing 3000 mineworkers in one case, Charles Abrahams, estimates that between 350,000 and 500,000 gold miners have contracted lung disease in South Africa in recent decades. 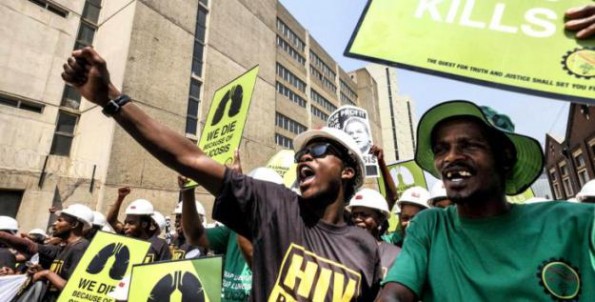 Members of the Treatment Action Campaign, Section27 and Sonke Gender Justice march in Johannesburg in a protest highlighting the issue of miners suffering from silicosis and TB.

Ntozoko Qwabe, spokesperson for the RMF campaign, as a Rhodes scholar has on several occasions been accused of hypocrisy for accepting the scholarship. He responds that far from being hypocritical, he is reclaiming a small part of that which was plundered from Africans. Andrews accuses the RMF campaign of using accusatory rhetoric and suggests that Qwabe is emotive and using `overblown` language, describing him as saying with “ gesticulating anger… that the statue, the curriculum and the shortage of black students and academics at Oxford forms part of a “racist” outlook that amounts to “structural violence”.” But if you examine the system of exploitation of black workers and their families developed by Rhodes and outlined above, it would seem that to call this racist and structurally violent is simply a statement of fact. It would be a bit unusual NOT to feel emotional about it.

Rhodes – Individual or System?
Patten, Beard, Anthony and others have argued that Rhodes was not alone in acting as he did and indeed this is true. Imperial history is littered with individuals who sought to extend the reach of the empire and exploit resources in the cheapest possible way. The mid to late nineteenth century was a period when private, armed entities with Royal Charters such as the BSAC set up by Rhodes and supported by Rothschild led the way in extending British imperial power, particularly in Africa.
But this does not mean that everyone agreed with them or thought in this way.  Rhodes` ventures into Mashonaland and Matabeleland ran counter to British government policy and he was opposed albeit too weakly to be effective in halting further expansion north of South Africa. Rhodes` legislation directed against black Africans was also opposed by a number of members of the Cape parliament but again not effectively enough. As mentioned above, the Ndebele and Shona people put up a valiant fight which was met with extreme brutality. Right from the beginning, mineworkers found ways to resist and subvert exploitation. They communicated through their own networks about and avoided mines with the worst conditions and engaged in a variety of informal strategies such as `loafing` and `deserting after payday` (Phimister, I.R and van Onselen, C. 1978).
The feminist novelist Olive Schreiner was one of Rhodes` most articulate and radical contemporary critics. It is odd that feminist academic Mary Beard does not seem to have read her. Schreiner`s novel, Trooper Peter Halket is a powerful indictment of British imperialism which names Cecil Rhodes as responsible for the massacres and land grabs in Mashonaland and Matabeleland and the cruel suppression of the Shona and Ndebele uprisings in the 1890s. It was published in London in 1897 in the same week that Rhodes was also in London facing questions from a Parliamentary Committee of Enquiry about his role in the Jameson Raid (an attempt to take-over Boer lands in neighbouring Transvaal) and the activities of the BSAC. He did have to resign as Chair of the Board of the BSAC although he remained an influential shareholder. Schreiner insisted that the frontispiece of the book include the photo of the notorious Hanging Tree opposite the title and Schreiner`s name. This tree, near Bulaweyo, was where the BSAC hanged so-called rebels; events also described in the story. The inclusion of the photograph powerfully reinforces the fact that the story is based on true events and real people.
Unlike the African fantasy adventures of Rider Haggard, Schreiner`s book Trooper Peter Halket is a bleak expose of the brutality of imperialism, of kraals laid waste, of African men and women maimed, raped and murdered and in which the `white adventurers` are brutal and without, it seems, any moral compass. At one point in the book the anti-hero Peter Halket thinks about things he has done in Africa that he could never justify to let alone tell his impoverished mother back in England about. Redemption is only available to those who risk everything to reach out the hand of solidarity to Black Africans.
Exposing Rhodes` culpability for the brutal acts in the book, the conflation of wealth with greatness in the mind of Peter Halket and the other morally compromised characters who do Rhodes` work “emphasizes the power of Rhodes as a system that requires the knowing complicity of others.” Schreiner`s letters are consistent in this critique of Rhodes as a system. She describes him as a man who has chosen to “act on men through the lowest sides of their nature” and who himself has chosen “the lowest path”. Those who were not opposed to him have helped to create through Rhodes a system of ruthless imperial expansion that will leave have worrying consequences for the generations to come.
“We fight Rhodes because he means so much of oppression, injustice, and moral degradation in South Africa; – but if he passed away tomorrow there still remains the terrible fact that something in our society has formed the matrix which has fed, nourished, and built up such a man! It is the far future of Africa during the next twenty-five or fifty years which depresses me. I believe we are standing on the top of a long down-ward slope.” (OS to John X. Merriman, 3 April 1897, SAL MSC 15)
In later writings, she continued to articulate her fears about the long-term damage that British imperial policy might have done stating “ with terrible historical clairvoyance that within fifty to one hundred years the bill for the wrongs done to the natives will be presented for payment, and the white man would then have to settle it.” (Sarvan C.P. University of Zambia).
Bibliography
Perrings, C Black Mineworkers in Central Africa Heineman London 1979
Phimister, I.R. and  van Onselen C. Studies in the History of African Mine Labour in Colonial Zimbabwe Mambo Press 1978
Sarvan, C.P. Olive Schreiner`s Trooper Peter Halket: An Altered Awareness in Notes and Short Essays https://journals.lib.unb.ca/index.php/IFR/article/download/…/14738
Ferguson, N. Empire Penguin Books 2007

This article first appeared on Undermining the Profits website.