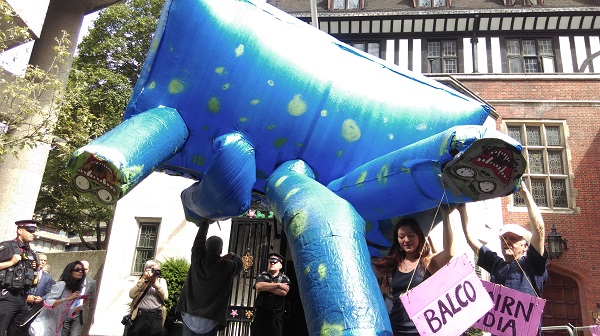 The following is a personal reflection on Vedanta’s recent Annual General Meeting (AGM) by Andy Whitmore
Like strawberries and cream at Wimbledon, or stories of seagulls stealing chips in Brighton, it seems that protests focussed on Vedanta’s AGM in London are becoming a British summer tradition. The fact that the AGM occurs in the news ‘silly season’ when most people are on holiday, is I am sure a coincidence. It can’t possibly be that the company wants to bury the inevitable bad publicity that comes from the time when it must annually face the glare of public – or at least shareholder – scrutiny?

Towards the end of what was an arduously long meeting at the Ironmonger’s Hall, a shareholder spoke of trying to reconcile the two worlds that she had heard in the meeting. They were the accusations of human rights abuses, atrocious work conditions and environmental pollution in Vedanta’s operations in India and Zambia, and the silky smooth reassurances coming from the board that the company really cared and was effectively ahead of the curve in terms of its corporate social responsibility.

The differences were most effectively illustrated when shareholders had visited mine sites and come back to report on what they had seen. At one point a questioner noted he had shown the company’s shiny new “sustainable development” [sic] report to villagers who were shocked by its contents, noting that one person quoted in it – fulsomely praising the company – did not exist in the village to which he was attributed.
The company’s primary response was to say they would investigate. This caused some frustration in heated discussions, because this was what had been promised before. One shareholder, raising the issue of the appalling lack of health and safety at the Bodai-Daldali mine in the central Indian state of Chhattisgarh (see: India’s tribal slaves to stone) noted the issues had been reported before, with promises of investigation, but little seemed to change. Vedanta’s CEO, Tom Albanese, said he was shocked by what he had seen (although the Chair Anil Agarwal seemed to suggest the footage may not be genuine). As was pointed out by the shareholder, it seems head office booked inspection visits in advance; maybe if they really wanted to see what was going on perhaps they should pop along unannounced?
Maybe that is the problem of the two worlds, that those at the top would really rather not look too deeply into the problems? One shareholder noted that for Tom Albanese to make the claims he does (and he makes many claims; his presence in the company has succeeded in polishing what was a very rough lump of ore), he is either ignorant or deliberately misleading shareholders. Perhaps Mr. Albanese sleeps well at night, having taken Vedanta’s shilling, by skilfully blocking out the thought of some of the company’s greatest harm.
More likely his slumber is assured by the promise of “zero harm”. This seems the most bizarre fad afflicting large extractive corporations, or those financing them. How can a company displacing people to rip up the earth on a vast scale do “zero harm”? In the latest “sustainable development” report Mr. Agarwal states “the priority is not just to focus on zero harm, but also to ensure zero discharge and waste”. Right. This is a mining company we are talking about here. Even if the company is causing huge problems now (enough to land them in court!), there will be incremental technical improvements that will make things alright eventually. Perhaps those are the two worlds; we live in the real world now, and they live in the fantasy world of the future.
The two worlds were also evident when an argument broke out among the shareholders, after one had asked people to stop wasting time by raising issues around how the company made its money, and only to talk about the returns to investors and financial issues, which he then of course proceeded to do at great length. When others pointed out that it might be relevant to question how the money is made, something of a verbal scrap ensued. Again, it seems there is a real world where one considers how money is made, and an abstract world where money is the prime, no sorry the only, concern.
However, in the end the two worlds were best illustrated when those of us who had sat through the whole meeting appeared somewhat tired and shell-shocked, blinking back into the summer sun. We were greeted by the drums and chants of protestors who had stayed outside during the whole, dreary meeting. Despite expressing righteous anger, they had continued to drum, and effectively party while inside our senses were numbed by numbers and PR speak. They had celebrated life in the open air, while some of us inside the stuffy, wood-paneled hall had felt it been stolen from us, minute by slow minute. To quote Trainspotting, if forced to choose between the two worlds, “choose life”.
For more information on the AGM and protest see: http://www.foilvedanta.org/news/india-zambia-london-protest-vedantas-agm/