Fear and loathing in La Guajira 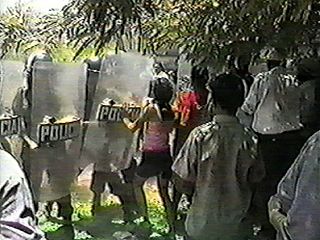 Forced eviction of the community of Tabaco to make way for the Cerrejon coal mine, 9 August 2001
Report by Richard Solly of Colombia Solidarity Campaign and Co-ordinator of London Mining Network
It is sad to see fear on the faces of people you love because of the threats they are receiving.
Between 2 and 7 August I was in La Guajira, Colombia, visiting communities affected by the Cerrejon mine, one of the world’s biggest opencast coal mines. It is owned by three of the largest mining companies in the world, all listed on the London Stock Exchange: Anglo American, BHP and Glencore. These three companies bought up the Colombian government’s 50% stake in the mine in late 2000 and then bought the 50% owned by Intercor, a subsidiary of US oil giant Exxon, in February 2002.
The mining concession covers 690 square kilometres, and within that huge area are six huge pits. These are not like British coal mines of old, where a thin shaft was sunk into the ground to access coal seams far below: these are massive open holes, where coal is gouged out using enormous mechanical shovels. Whatever is on the surface – woods, farmland, villages – has to be erased in order to open up the pit and get at the coal. 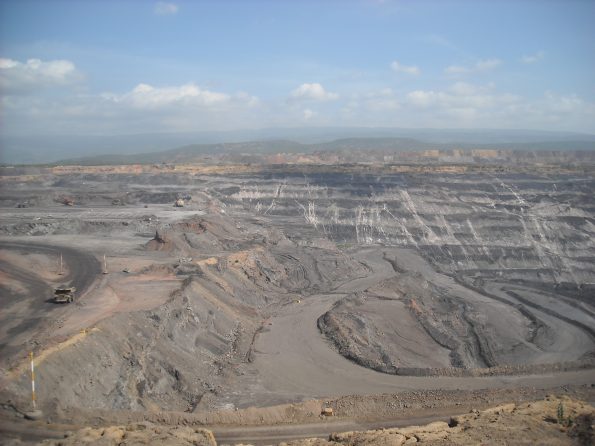 This visit was organised by US organisation Witness for Peace under the guidance of US academics Avi Chomsky, Steve Striffler and Emma Banks, with whom we have been working for many years. We visited nine communities and received testimony from six more. We had discussions with the mine workers’ union, Sintracarbon, and participated in a meeting between community leaders, union representatives and mine management.
This was my seventh visit to the area. The first was in 2000. Then, I visited the beautiful little farming village of Tabaco. It was destroyed in August 2001 and has disappeared into the mine. A Colombian court decision of May 2002 ordered that the community be reconstructed on another site so that the people could continue to live together as a farming community. In 2008 the Cerrejon Coal company reached an agreement with the community to buy land and help reconstruct the village on a new site. The fatal weakness of this agreement was that the local municipality – which is poor – would have to pay the cost of reconstructing the village. It could not, and cannot, afford it. There is still no new village, and the community remains geographically dispersed and divided among themselves about the best way forward. The cost of rebuilding the community could probably be met with a sum less than the annual pay of the Chief Executive Officers of any of the three multinationals involved. 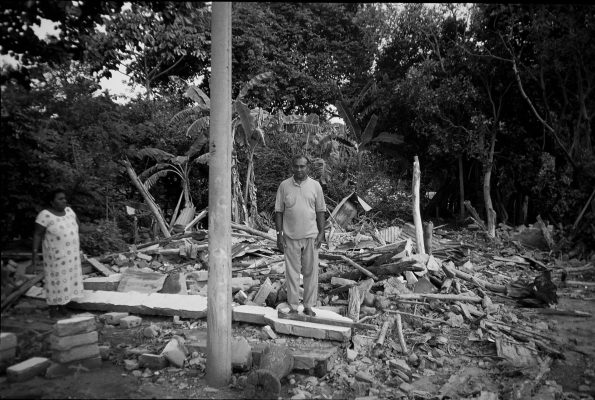 A couple stand in the ruins of their house in Tabaco, 9 August 2001

Then there are the communities which have been moved as whole communities to newly constructed villages as a result of their own hard struggle and with the help of organisations such as Colombia Solidarity Campaign and London Mining Network and other allies around the world, who have publicised their demands and pressured the companies to improve their behaviour. These were rural villages and their inhabitants mostly wanted to continue to live by small-scale farming. They have been moved to semi-urban sites close to the town of Barrancas, without sufficient land to make a living from it and without the skills to pursue other livelihoods. 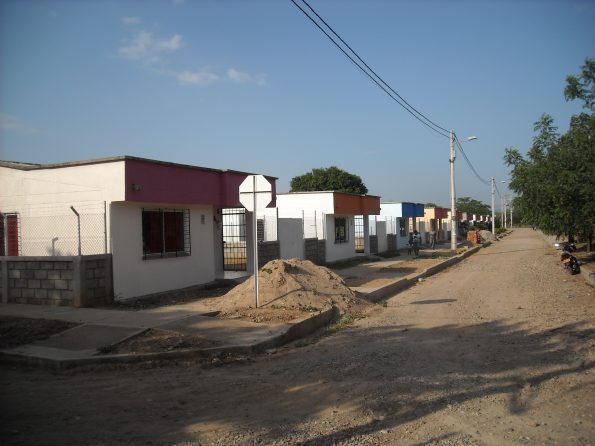 Then there are communities affected by the railway line which takes the coal from the mine to the port, a hundred miles to the north-east, on the Caribbean coast, for export to Europe, North America and Asia. They suffer contamination from coal dust blowing from the open trucks, from the noise of the long trains passing by at all hours, and from the oppressive presence of the Colombian army, stationed there to protect the railway from attack. Livestock, and sometimes people, are run over and killed by trains, and levels of compensation for people’s losses are viewed as a deeply offensive insult, ignoring the traditions of the indigenous Wayuu people whose land the railway crosses.
There are also communities which were dispersed in the earlier stages of the mine’s expansion, in the 1980s and 1990s, without any provision for reconstruction of their villages and with utterly inadequate compensation, if any. And there are other communities affected in different ways by the mine.
Finally – and much more hopefully – there is the village of Tamaquitos, whose people insisted on relocation when the communities with which they interacted, and on which they relied, had been destroyed, and which was being increasingly affected by blasting and contamination from the nearby mine. The people of Tamaquitos managed to avoid being divided by the company, and remained firm in their demand for a rural relocation site, with houses and community buildings constructed according to their own designs and in harmony with their own indigenous traditions. They continue to experience problems, but have fared much better than other communities because they managed to remain in control of the negotiations with the company. Even so, they complain that the company is far behind on a number of its commitments to the community, and say that they will return to their old site later this month if they do not get proof of the company’s willingness actually to fulfil its obligations to them. 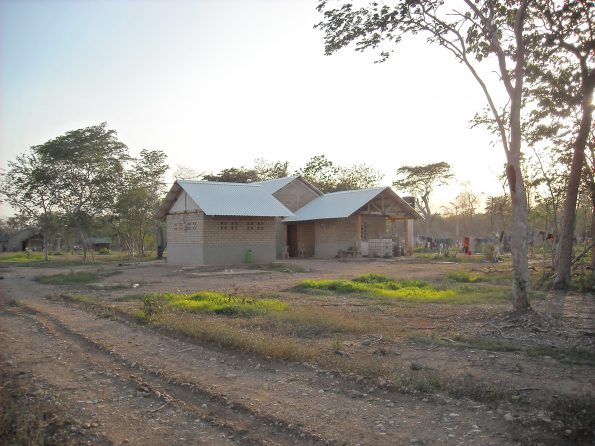 I will write further about these issues in a future blog. But it is possible to summarise the concerns which were repeatedly expressed. Cerrejon Coal’s treatment of local communities has led to a very high level of distrust. People feel that the company is arrogant and that it treats small-scale farmers with contempt.
*Communities affected by the mine, including relocated communities, often lack sufficient water, and the water is often of such poor quality as to be undrinkable.
*Air around the mine and railway is contaminated with coal dust.
*Polluted air and water are causing health problems for local residents.
*People have lost the sense of freedom that they used to feel in living their rural lives before the mine came.
*Many people have lost their farming livelihoods.
*Almost all the ‘productive projects’ which the mine has financed to give people the possibility of new livelihoods have failed, leaving people worse off than before.
*Housing in the reconstructed communities is of poor quality.
*There is a lack of justice for the people of Tabaco and for communities displaced before 2000.
*The company frequently fails to follow through on the commitments it makes.
*The company frequently fails to implement decisions of the courts, which should be respected.
*The company uses repeated delays as a deliberate tactic to avoid treating communities justly and to undermine their resolve to continue working for justice.
*The company interferes in communities’ internal decision-making processes and creates or worsens divisions in communities.
*Although the mining company has improved educational opportunites for many young people in relocated communities, there is a need for better educational opportunities in many communities.
*Water courses, including the Arroyo Bruno (Bruno stream) must not be diverted to make way for mining.
*There must be no further expansion of the mine.
*People continue to insist that the land belongs to its inhabitants, who have been in the area for many generations in the case of African-descent communities and since time immemorial in the case of indigenous Wayuu communities – it does not belong to the mining companies.
*People wonder what will happen when the mine closes – the regional economy has become heavily reliant on it, and there are fears that mined-out land will be left unrestored.
*Community leaders and others who are challenging the mining company and seeking justice are being targeted with death threats against them and their families.
This last point brings us back to the beginning. Many of our own friends in La Guajira – people who are our primary sources of information about what is going on, people who have welcomed us in La Guajira and visited us in Britain – are currently living with death threats against themselves and their families. The company publicly condemns such threats, but it is precisely and solely because of the way our friends challenge the company that they are singled out and threatened by persons unknown.
We owe it to our friends to strengthen our work of solidarity. After eighteen years of involvement with the struggle of communities affected by the Cerrejon mine, I can see that some things have improved – but not enough. And the threats have got much, much worse. Our friends in communities and the union tell us that the support of their friends in Europe, North America and elsewhere gives them courage to keep up their struggle, and helps them win such victories as they have been able to win so far. We have to keep going so that they can keep going, until they obtain justice.
You can read former posts about Cerrejon Coal here.