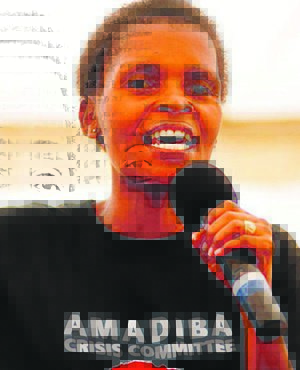 The Amadiba area of Pondoland is on the beautiful eastern coast of South Africa, but the territory and its people are threatened with destruction by MRC, an Australian mining corporation financed from London. MRC wants to dredge up the Xolobeni sands to extract titanium and other minerals.
The Amadiba Crisis Committee (ACC) is a grass roots organisation that has for ten years articulated the community’s opposition to the project. They have been persecuted. In 2016 ACC chairperson Bazooka Radebe was shot dead, other leaders now fear for their lives. Nonhle Mbuthuma was in 2017 shortlisted for the international Frontline Defenders Award in recognition of her continued activism in the face of this danger.
“I wake up each morning and thank God I am still alive …I know I am a target. My husband and my family and friends are worried. They tell me to go into hiding. But I can’t do that. It’s not me. I choose this road.” The Guardian 21 July 2018
The ACC have a plan to develop their region, also known as the Wild Coast, through agriculture and ecotourism. They have taken the Ministry of Mines to court, to insist that the community’s wish not to have the mine is fully taken into account. But the government has not listened to the people.
MRC is based in Perth Australia. Some 40% of its shareholdings are held by London financier Graham Edwards. MRC already runs a coastal mine on the west side of South Africa, which has caused widespread environmental damage. The Xolobeni project is now fronted by a local ‘black economic empowerment’ company called TEM, but MRC still pulls the strings and Edwards would still be the ultimate beneficiary.
After Marikana, we call for an end to the toxic collusion between London financed corporations, the ANC government and the South African police. Come and hear Nonhle speak. Let us see what we can do. 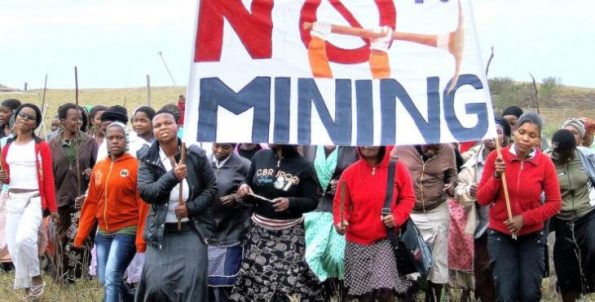