The sound and the fury: yet another GCM AGM 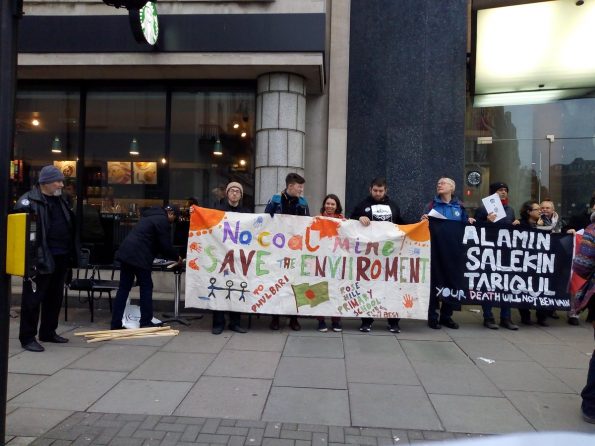 Report by Richard Solly, Co-ordinator, London Mining Network
I suspect that GCM Resources management thought that if they held their AGM this year on 28 December, deep in the heart of the Christmas-New Year break, protesters would stay away and they could have a quiet time. How wrong they were!
I have been attending GCM Resources AGMs for years. They are usually much the same: company management try to explain why they have still been unable to start work on their sole project, an open pit coal mine at Phulbari in Bangladesh, despite years of trying; some shareholders try to reassure themselves that they are not going to die before they see a return on their investment; and dissident shareholders point out the enormous damage the project would do to local communities and livelihoods should it ever go ahead – as well as the catastrophic damage it would cause to the planet’s climate. (You can read some background on the company and full reports of the 2011, 2012, 2013, 2014, 2015, 2016 and 2017 AGMs elsewhere on our website.) Meanwhile, outside, a lively protest starts well before the AGM and lasts until the shareholders emerge after the end of the meeting.
This year was different. I would love to be able to write a report about what happened at this year’s AGM, but I can’t. We weren’t allowed in at all, despite the fact that between us we own some shares that give us the legal right to attend and vote. We were not alone: a number of the ordinary shareholders were also excluded. In fact, judging by attendance at the last few years’ AGMs, I would say that most of the people who would have been at this year’s AGM were stuck outside the locked doors of 33 Cavendish Square, London W1, where the AGM was to take place.
It was all because the building’s security guards over-reacted quite unnecessarily to an entirely laudable protest by some of our friends in the climate movement, who heroically glued themselves to the security barriers inside the foyer. Security personnel were most upset about this, and locked all the doors. Even people who were employed at one or other of the many entities operating from the building had a hard time getting in. I pointed out on multiple occasions that the security guards were depriving me of my legal right to attend and vote at the AGM of a company in which I held shares, but to no avail. The guards were in a melodramatic strop and unwilling to listen to reasoned argument. They could perfectly well have let shareholders in to the building through the fire exit, but chose not to do so. 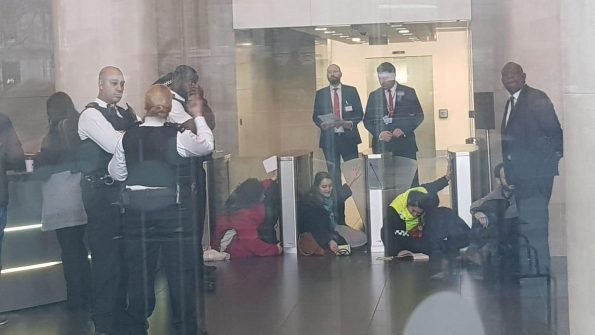