What is Anglo American?

Anglo American is a British mining company that has roots in South Africa, its headquarters in London, and is listed on the London Stock Exchange. It mines for diamonds, copper, platinum, coal, iron ore, nickel and manganese in Africa, Asia, Australasia, Europe, USA and Latin America.

Why did we protest Anglo American’s AGM?

A coalition of organisations – War on Want, Medact, Yes to Life, No to Mining, Global Women’s Strike and Colombia Solidarity Campaign and others – campaigned outside Anglo American’s annual shareholder meeting on 30 April to stand in solidarity with mining-affected communities. As well as Anglo American being part-owned by a British company, the City of London is extremely significant as the global financial hub of the extractive industry, of which mining is a huge part. This means that what happens in London has an impact on the climate and on communities around the world. In our demonstration outside and during interventions in the AGM, we called on shareholders to divest from Anglo American and on the company (usually represented by CEO Mark Cutifani), to clean up their act, because… 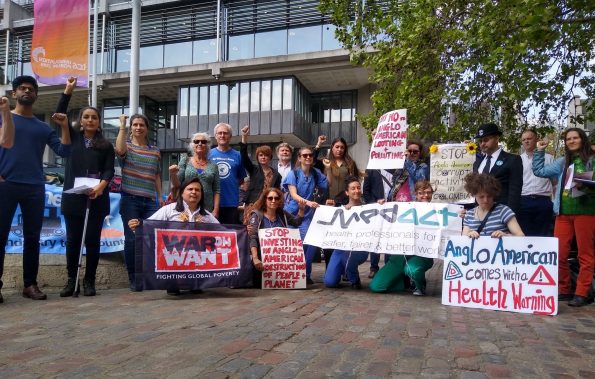 …Anglo American is damaging the health of communities & workers

Anglo American owns a one-third stake in the infamous Cerrejón mine, a vast open pit coal mine in Colombia. Indigenous communities living near the mine are forced to breathe air that is heavy with coal dust and filled with the smell of burning. The air pollution is reported to be causing serious respiratory problems, skin conditions, and cancer in children and adults living close to the mine. Cerrejón employees also face occupational diseases, such as occupational asthma, occupational tuberculosis and silicosis.

The company reported 101 new cases of occupational disease for 2018, up from 96 cases in 2017, and five fatal accidents.

Question comes in about Anglo American’s #ZeroHarm safety policies, and the 5 people who lost their lives in 2018. What actions are being taken?

ShareAction asked if Anglo American would commit to publishing a Just Transition policy, in collaboration with unions, by the company’s 2020 AGM:

Cutifani says Anglo American is “absolutely aligned” with the just transition, which he says they are already in.@ShareAction push on a policy.

Chambers says they won’t commit, as it would be “rash”.
— LondonMiningNetwork (@londonmining) April 30, 2019

Climate breakdown is already impacting the health of hundreds of millions of people around the world. Mining corporations like Anglo American are responsible for a considerable portion of global carbon emissions and other devastating environmental impacts. As the climate crisis propels the world to move away from coal, Anglo American is stubbornly clinging on to this carbon-intense fossil fuel. 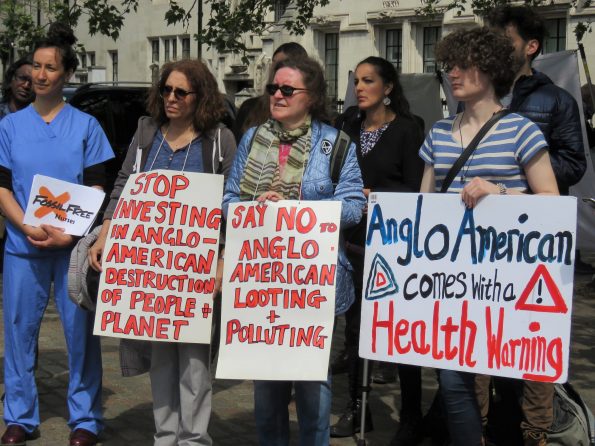 Coal Action Network challenged Anglo American’s claims about the diversion of the Bruno River in La Guajira, the community in Colombia impacted by the Cerrejon mine (of which Anglo American owns a third). They described water running black, crops dying, and people falling ill, and asked how Anglo American would use its influence to address this:

Cutifani says Anglo American are happy to follow up on this after the AGM… But says resettlement processes have been improved a lot over time and says Anglo has championed these at Cerrejon.

Says 85% of #water used by mine is unfit for consumption anyway. #AngloAmericanAGM

In Peru, Anglo American’s Quellaveco project has raised serious concerns and opposition among local people. It is believed that copper mining in this region will use vast amounts of water in an area that has experienced drought and is vulnerable to other climate impacts. There are fears that Anglo American’s mining in Chile is speeding up the melting process of glaciers, leading to their disappearance in some cases.

London Mining Network researcher Paul Robson asked CEO Mark Cutifani about water stress in Brazil and Minas Rio, around the site of a mine, and what was being done to protect local people’s access to water:

Cutifani: attributes over use of water to process of improving efficiency. Looking at tech to improve water recycling and reduce usage. Want to decrease water use by 50% at Minas Rio and across operations#AngloAmericanAGM

…Anglo American is greenwashing its image

Anglo American’s metallurgical and thermal coal projects, the most polluting fossil fuel projects across the world, remain central to their operations despite token efforts to sugar-coat this with a reduction in their operational greenhouse gas emissions.

The UN Environment Programme has revealed that resource extraction and processing make up approximately 50 percent of total greenhouse gas emissions, making plans for a green industrial strategy prefaced on continuing extraction are simply not realistic, because this positions mining companies as the solution-bearers to the climate crisis, and not as the enablers and polluters that they are.

Chambers: Says Anglo American Won’t be setting a date for zero emissions–points to difficulties in quantifying carbon in supply chains.

Basically says that committing to zero carbon would be too difficult.#AngloAmericanAGM

At one point during the three hour meeting, the CEO Mark Cutifani said: “if it’s not grown it must be mined”. That sums up the company’s, and the industry’s, response pretty well… the full report of the AGM will be online soon.

(Big thanks to Hal for the tweets and Aldo for photos)