Citing Lonmin’s inaction over demands made by South Africa’s Marikana community in the seven years since 34 striking mine workers were shot dead on 16th August 2012, activists from the campaign group Marikana Solidarity Collective will conduct a People’s Tribunal, rather than attending the company’s shareholders’ meeting to ask questions of its executives. The campaigners and representatives of Marikana demand accountability from Lonmin before its proposed takeover by South African mining corporation Sibanye Stillwater.

In addition to the calls for accountability, campaigners highlight that Sibanye Stillwater has the worst record on worker fatalities across the South African mining sector, with 24 deaths in 2018 alone, and that it is also planning to cut 4,500 jobs during the takeover. They claim that this will devastate an already precarious community.

On Tuesday, the coalition say they will put Lonmin and its shareholders ‘on trial’ for crimes against African people and nature, and deliver a verdict after an hour-long tribunal outside the venue. Testimonies and charges (2) from Marikana community members and those submitted by social movements will be heard. 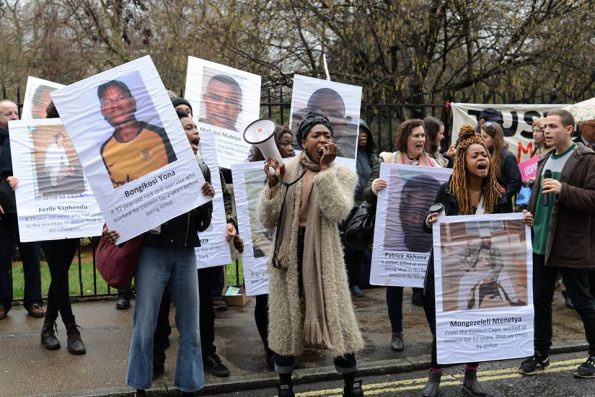 Nima Mudey of Decolonising Environmentalism, said: ‘The Marikana workers and community have been organising relentlessly for justice since South African police opened fire on unarmed workers on strike for a living wage, at the orders of the ANC government in collusion with Lonmin (1). But demands have been met with fierce repression rather than reparations or accountability. After the likely takeover, Lonmin will be able to absolve itself of its legal obligations altogether. The true story of Lonmin must be told before it is allowed to do so.’

The Right Reverend Johannes Seoka is a former Anglican Bishop of Pretoria, South Africa, he said: ‘The merger is bad news for the miners and their communities in the Platinum belt of South Africa. The conditions in which people live and work are worse than they were before 2012 when they were massacred for a living wage and better working and living conditions. The struggle is not over but has just begun. We must now focus on Sibanye-Stillwater’s investors and shareholders.’

Andy Higginbottom of the London based Marikana Miners Solidarity Campaign said: ‘Lonmin is the British company that instigated and colluded with the ANC government and the police in carrying out the massacre. The role of Lonmin’s executive managers and major shareholders must be held to account. Mick Davis was the chief executive of Xstrata, Lonmin’s biggest shareholder at the time. Davis is now the Chief Executive of the Conservative Party. There are questions to be asked about whether he had a role in the massacre.’

Lonmin is a British-South African mining company. It is the world’s third largest platinum producer and is listed on the London Stock Exchange. One of its mines is in Nkaneng, Marikana, an informal settlement in rural South Africa. On August 16, 2012, 34 miners from the Lonmin platinum mine were shot and killed by South African police during strike action. The miners were on strike for a living wage and against their inhumane working and living conditions. While the killings were carried out by the police, according to a report by the Farlam Commission, an independent commission of inquiry, significant responsibility for the massacre lies with Lonmin for failing to adequately negotiate with or protect its employees during the dispute.

Lonmin has legal obligations to the community that they mine under and around, but they have yet to comply. Families of those killed are still waiting for compensation and their widows are working at the mine, because they cannot afford not to. Only a handful of the promised 5,500 homes for the 36,000 Lonmin workers have been built.

Lonrho in Rhodesia since 1909