Some of our friends in La Guajira, including members of Wayuu indigenous organisation Fuerza de Mujeres Wayuu, other community leaders and members of mine workers’ union Sintracarbon, have received fresh death threats.

Fuerza de Mujeres Wayuu has been constant in its calls for justice for communities affected by the Cerrejon coal mine in La Guajira, Colombia.

The mine is owned by London-listed multinationals Anglo American, BHP and Glencore. Threats were issued on Monday 29 April, the day before the AGM of Anglo American in London. The last time such serious threats were issued was just before the October 2018 London  AGM of BHP. It is unclear whether the timing was deliberate. Further threats have been received more recently.

Please read the comunique below from Fuerza de Mujeres Wayuu and send a protest email to the Colombian government offices listed below it. 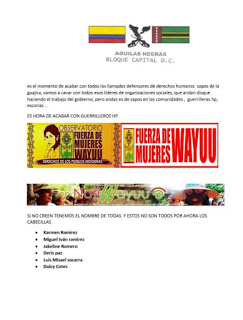 We denounce stigmatization, persecution and threats

This time the threats have been targeted towards our movement and the people it comprises. We have completed 14 years of tireless work, in which our only weapon has been The Word that we raise in defence of what we consider just, for the protection of Wounmainkat – Our Mother Earth, our rights and the right to life in peace.

We denounce and repudiate the new strategies of threats that have been carried out this time by “Aguilas Negras – Bloque Capital D.C.” through fake profiles on social media that, since April 29 at 3.50 pm, have published a flyer in which we are persecuted, stigmatised and threatened.

We refer here to the facts in detail which demonstrate a new collective threat against our movement Wayuu Women’s Force – Fuerza de Mujeres Wayuu – Sütsüin Jiyeyuu Wayuu, and which specifically identifies the names of persons in our movement.

Many of us in the movement started to receive message alerts from people close to us, that there was a flyer circulating on social media in which we were threatened.

Around 4 in the afternoon on 29 April, using a profile from the social media Facebook under the name of “Pedro Lastra”, two images were published and shared: one referring to threats in 2018 in which the logos of our organisation appeared together with those representing the Movement Wayuu Nation – Movimiento Nacion Wayuu, the Wayuu Organisation Araurayu – La Organización Wayuu Araurayu, and the National Organisation of Indigenous of Colombia – ONIC. The second image has the logo specifically of La Fuerza de Mujeres Wayuu, and it also directly identified the names and surnames of 6 of our members: Karmen Ramírez, Miguel Ramirez, Jakeline Romero, Deris Paz, Luis Misael Socarras and Dulcy Cotes.

The publication from the “Pedro Lastra” Facebook profile has comment that tags two other people: Carlos Daniel Hernández and Rosa María Cano. When checking back on Facebook to obtain information about “Pedro Lastra” by around 9pm, the profile had already been deleted.

It is not the first time that misogynist and hate campaigns have been launched against La Fuerza de Mujeres Wayuu; we have also been threatened with death, and the persecution that we have had to face has even obliged some people from our movement to flee the territory. Despite the complaints we have raised with the appropriate institutions, this has not secured that we can continue doing our work for the defence of peace, our rights, the rights of Wounmainkat – Mother Earth – and our own lives without danger.

Since the threats made against us on 10 October 2018, there has not been any result from our complaints. Once again, we hold the Colombian State responsible for any attack against our work or our lives. Once again, we make the following:

We ask the Inter-American Commission on Human Rights to grant precautionary measures to the Movement Fuerza de Mujeres Wayuu – Sütsüin Jiyeyuu Wayuu, to be able to continue to our work for the defence of Wounmainkat – Our Land, Winkat – The Water, Kataa o’ui – Life, and Anajirra A’in – Peace.

We ask the current Government to initiate an immediate plan of action to guarantee the fulfilment of the rulings issued in favour of Indigenous Peoples by the Constitutional Court to avoid the extermination of our peoples as a result of war. In addition, we ask that this request be answered as a matter of priority, given the serious risk in which we find ourselves, in order to protect our lives.

We call on the Diplomatic Missions and Corps accredited in Colombia to monitor the delicate and vulnerable situation of Wayuu human rights defenders. We also ask that you demand that the current Government fulfil the Peace Agreements, as well as its commitments taken on internationally on the issue of human rights, particularly those related to Indigenous Peoples and Human Rights Defenders.

We urge the National Protection Unit – Unidad Nacional de Protección (UNP) to re-evaluate the measures of the protection plan for Fuerza de Mujeres Wayuu – Sütsüin Jiyeyuu Wayuu, as well as to strengthen these strategies from a holistic point of view that considers spiritual protection as part of the programme, which will allow us to guarantee not only the work in our territory, but also the protection of life.

London Mining Network co-signed a protest letter sent by our friends at ABColombia to the Colombian government, along with LMN member groups Coal Action Network, Colombia Solidarity Campaign and War on Want, and other organisations in Britain and Ireland.

Cerrejon Coal has itself publicly denounced the threats against community leaders and trade unionists.

Please send a protest email to the government agencies listed below.

We at London Mining Network suggest that you write:

I am concered about recent threats to members of Indigenous organisation Fuerza de Mujeres Wayuu and other social leaders in La Guajira.

On 29 April, Fuerza de Mujeres Wayúu received death threats from a group identifying itself as Águilas Negras – Bloque Capital D.C. The following leaders were listed as particular targets: Karmen Ramírez, Miguel Iván Ramírez, Jakeline Romero, Deris Paz, Luis Misael Socarras and Dulcy Cotes. Indigenous community leader María Cristina Figueroa Bouriyu from Provincial and African descent community leader Inés Perez were threatened around the same time. Renewed threats were received by some of these individuals on 8 May. Members of the Wayuu community have reported the presence of strangers in their settlements and loitering around their homes at night. On 11 May, Igor Diaz, a member of the National Board of mine workers’ union Sintracarbon, and other mine workers, also received death threats.

It is clear that these threats have been made because of these people’s work for human rights and environmental justice in La Guajira. Fuerza de Mujeres Wayuu has been prominent in the struggle for justice for Indigenous and African-descent communitiesaffected by the Cerrejon coal mine, owned by three companies listed on the London Stock Exchange.

I urge you to respond positively to requests made by organisations in La Guajira, including:
• to increase protection measures offered to members of Fuerza de Mujeres Wayúu, particularly the leaders named as specific targets, and to other threatened Indigenous and African descent community leaders and trade unionists;
• to launch a comprehensive investigation to identify the authors of these threats;
• to take effective measures to dismantle the illegal armed groups operating in La Guajira; and,
• to ensure compliance with the Constitutional Court decisions regarding Indigenous peoples.