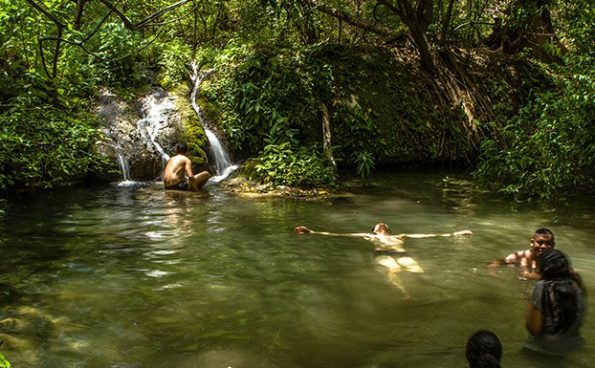 The Arroyo Bruno near El Rocío

The indigenous community of El Rocío, located along the Arroyo Bruno (Bruno Stream) between Albania and Maicao in La Guajira, Colombia, was threatened with forcible displacement by police on 23 and 24 July, and has since been verbally warned by the inspector of the Maicao police that the community will officially be removed on 1 August, 2019.

The Constitutional Court recently ruled against a tutela (injunction) filed by one of the community authorities in response to the purchase of their land by two women from a neighbouring community in 2012. Both women are relatives of members of both the FARC (a former guerrilla force) and a right-wing paramilitary group.

According to the community, Carbones de Cerrejón (owned by London-listed multinationals Anglo American, BHP and Glencore) has been interested in acquiring El Rocío’s land, which is upstream of the 3.8 km diversion of the Arroyo Bruno. The river diversion allows Cerrejón to expand the La Puente pit and extract coal from underneath the original channel. The community and their legal representative fear that the two women who have supposedly purchased the land will sell it to the company and that a second step of the diversion further upstream will be realised. The tutela filed by the community authority of El Rocío in response to the land title presented by the two women was not granted by the Constitutional Court, and the community has been told that there is nothing they can do to stop this process of removal.

On Thursday, 25 July, CAJAR, a lawyers’ collective in Bogota, filed a tutela to the Constitutional Court of Colombia asking that the rights of children, elderly individuals, and pregnant and lactating mothers be protected by suspending the removal, stating that if displaced, the community will be put in a situation of extreme poverty, a violation of these fundamental rights. Currently, El Rocío is made up of around 30 families, of which 10 families permanently inhabit the territory (including more than 15 children, 5 mother’s breastfeeding, and one pregnant woman). Some members of this Wayuu community have been victims of forced displacement due to armed conflict on two occasions, first in 1997 and again in 2010. Many have inhabited this piece of land for more than 40 years.

International and national organizations defending human rights and the environment in La Guajira, including London Mining Network, Colombia Solidarity Campaign and War on Want, ask for the following:

1. To the Mayor’s Office of Maicao and Albania, to the Central Police Inspectorate of Maicao and the National Police: that ESMAD riot police refrain from performing any eviction because the Constitutional Court has not yet decided on the most recent tutela.
2. The needs and fundamental rights of all the members of the indigenous Wayuu community of El Rocío should be considered in detail and their protection should be prioritised; guarantees should be given for their continued safe residence in their territory.
3. To the Offices of the Regional and National Human Rights Ombudsman: that they act effectively to represent and take legal action on behalf of the community, given their current state of defenceless, and that they assist with challenges to the proposed eviction whenever it represents an imminent threat to the fundamental rights of the Wayuu community of El Rocío.
4. To the Municipal Attorney and the Attorney General’s Office, that they act as guarantors of the human rights of the indigenous people at risk in the face of the eviction planned for this week.
5. To the Departmental Office of the Prosecutor, that it assist with possible complaints about illegal acts against fundamental rights and investigate civil and public servants that violate the regulations and protocols established in the field of human rights, children’s rights and the rights of indigenous communities.
6. To the National Unit for Land Restitution (URT) and the Unit for Victims (UARIV), that they pursue investigations into the displacements of which the Wayuu community have been victims, insist that the planned displacement not be carried out on the grounds that it would violate the human rights of the victim population, and that they offer comprehensive reparation measures within the framework of Law 1448 of 2011.
7. We note that, in the course of this process, no topographic survey has been carried out to delineate the property, and we urge that this be done.