Saving the river: the struggle for Colombia’s Arroyo Bruno 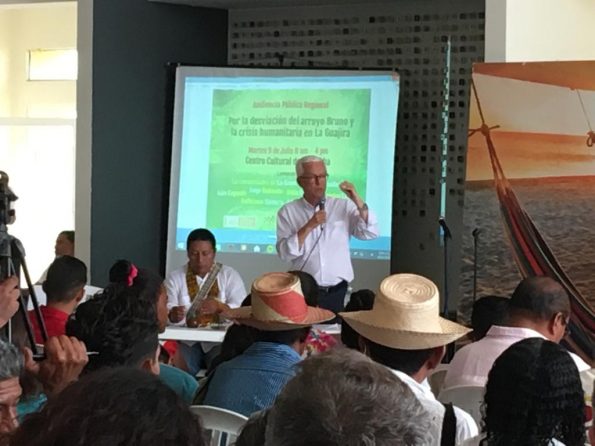 Senator Jorge Robledo at the hearing in Riohacha

The subject under discussion was the diversion of the Arroyo Bruno (Bruno Stream), an important tributary of this arid region’s only major river, the Rio Rancheria, which flows across Cerrejon’s mining concession. The company has diverted the Arroyo Bruno into a new channel to the north of its natural course in order to mine the coal underneath it. Local communities objected and three of them took legal action. The Colombian Constitutional Court ruled that an ‘inter-institutional roundtable’ should be established to decide whether the river should be returned to its natural course, and that this roundtable must include representatives of affected communities; but Cerrejon Coal has failed to comply with the ruling by excluding community representatives from closed-door meetings where the decision was made not to restore the river to its natural course.

Those speaking at the event included community leaders from several communities affected by Cerrejon, among them La Gran Parada, Paradero, El Rocio, Charito, Tabaco, Caracoli and Provincial; representatives of Colombian government bodies including the Ministry of the Environment, national and regional environmental regulatory bodies, and official oversight bodies which exist to ensure that government entities fulfil their mandate; the Vice Minister from the Ministry of the Interior; invited speakers including geologist Julio Fierro, Colombian academic Astrid Ulloa (an expert on social and cultural impacts of economic projects) and Professor Aviva Chomsky from the Salem State University in the USA; Colombian Senators Jorge Robledo of the Partido Alternativo Democratico (Democratic Alternative Party) and Feliciano Valencia, an Indigenous Peoples’ representative; and representatives of Cerrejon Coal.

Also present were people from more than a dozen African descent and indigenous Wayuu communities; allies from the Wiwa, Kogui and Arhuaco Indigenous Peoples; local organisations including our friends from Fuerza de Mujeres Wayuu, the Comite Civico and Nacion Wayuu; and the Asociacion Interamericana para la Defensa del Ambiente (AIDA, the Interamerican Association for the Defence of the Environment).

Senator Jorge Robledo declared that the ‘inter-institutional round table’ established by the company and government bodies had not been complying with the Consitutional Court ruling which states that communities, civil society organisations, academics and other experts must be involved in its deliberations. He accused the company and government bodies of trying to control it. Government bodies had no substantive response to this accusation. The Vice Minister of the Interior became very defensive but offered little information.

Community representatives, on the other hand, offered a wealth of information about the impacts of the mine’s activity, including the diversion of the Arroyo Bruno, on their lives and livelihoods. One complained that on the occasion when community representatives had at last been invited to a meeting of the inter-institutional roundtable, insufficient notice was given for her to consult her community’s shaman in accordance with Wayuu tradition. Another said that he worked for the mining company but had criticisms of it and wondered whether he would have a job the next day. He said that mining had been imposed on the communities and on the territory. There was a call for geological experts to be involved in the inter-institutional roundtable to advise the communities.

Cerrejon Coal representatives then stated that they could not restore the Arroyo Bruno to its natural course now because they had diverted not only the river itself but the subterranean aquifer associated with it, through the use of large ‘plugs’. It would be very complicated to reverse this and would endanger the environment. Senator Jorge Robledo retorted that he did not believe this. He also asked why, below the point at which the river had been diverted, both the original course and the diverted course were currently dry. It was stated that the Arroyo Bruno is a seasonal river. Community members refuted this, saying that until the diversion it had flowed every day of the year. Geologist Julio Fierro accused the company of offering opinions rather than evidence. He demonstrated with government figures that the Arroyo Bruno had not dried up before the diversion. He called on government bodies to make decisions based on evidence.

Various community members said that the mining company was criminal and that the government was complicit. Another thanked people for “coming to this funeral”. One talked about how the Pulowi, a spirit of nature, comes to Wayuu people in their dreams and tells them to go out and fight against the mine. She talked about water contamination, pointed at company representatives and government officials and invited them to drink the same water that the people in the communities have to drink. Another said that the legally mandated ‘prior consultations’ being carried out were not ‘prior’ because the mining had now been going on for decades. She said that nobody cared about the Wayuu people – they just wanted the resources. Others spoke about the spiritual damage and cultural loss brought by the mine, which amounted to ‘killing’ the largest Indigenous People in Colombia, the Wayuu. The Comite Civico talked about the damage being done to the Rio Rancheria and the relative lack of employment brought by the mine.

A representative of CINEP summarised the recommendations being made by communities and their allies, which involve: reconsideration of the decision to maintain the river diversion; provision of all information, studies, reports and notes from closed door meetings; the creation of a committee in Congress; appointment of a neutral secretary of the inter-institutional roundtable, drawn from one of the official oversight bodies; and an end to the expansion of mining, oil and gas extraction in the Caribbean region.

Another CINEP representative talked about recent threats made against the mine’s critics, showing a photo of recent threat that community leaders had received. He said that none of the events were being investigated, and hoped that this event would not contribute to any more threats of violence against social leaders.

Unfortunately, further threats have been received since the gathering. We remain on alert in solidarity with our friends in La Guajira. We insist that their demands be accepted.