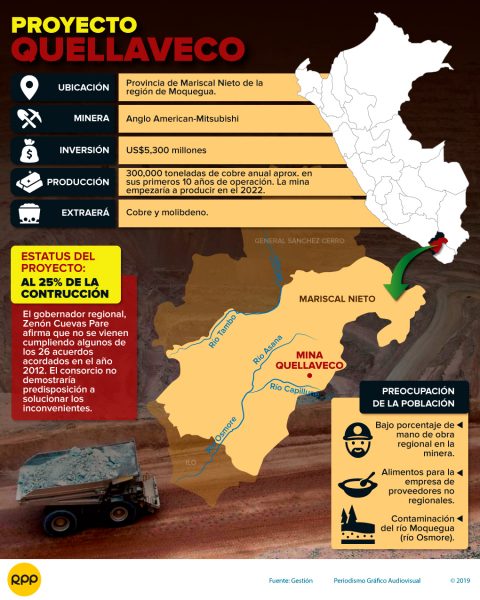 In Moquegua (southern Peru), hundreds of citizens including campesinas and campesinos protesting against the Quellaveco copper mining project, run by the British Anglo American company, blocked the most important roads in the region, which has caused dozens of vehicles to be stranded.

On Monday 12th of August, an indefinite strike began against the construction of the Quellaveco copper. It was announced by the regional governor, Zenón Cuevas Pare. According to the land defenders and the regional governor, the mining company has not complied with some of the agreements of the dialogue table, a document signed in 2012 with the population seven years ago.

This project will require an investment of up to US $ 5,300 million. And it will annually produce 300,000 tons of copper, on average, in its first 10 years of operation. The mine would start producing in 2022.

Among the claims are non-compliance with the hiring of skilled labour in the region, contracting with non-Moquegua suppliers, the lack of investment in the Development Fund and the contamination in the Moquegua Rivers. Jesús Paredes, president of the Moquegua Anti-Corruption Front, said that the project is unfeasible because it is located at the head of the Asana River. According to Zenón Cuevas, the population is very concerned that the Maximum Permissible Limits established for water quality have already been exceeded.

“There is no predisposition of the company (Anglo American) to solve the problems. There has been evidence of debris following the work done by Anglo American, the water (from the Moquegua River) already had arsenic and boron, but pollution levels have risen” he said.

Protesters call for water and the environment to be declared in emergency in the Moquegua region. In addition, they have expressed their support for the campesinos of the Tambo Valley who demand the cancellation of the construction license for the Tía María mining project (located in Arequipa, Peru) because of water contamination and poisoning of the communities.