What? Solidarity vigil on 7th anniversary of Marikana Massacre. Please bring your voices and yellow flowers. We will be reading out the names of those who died and will observe a minute’s silence to remember them. 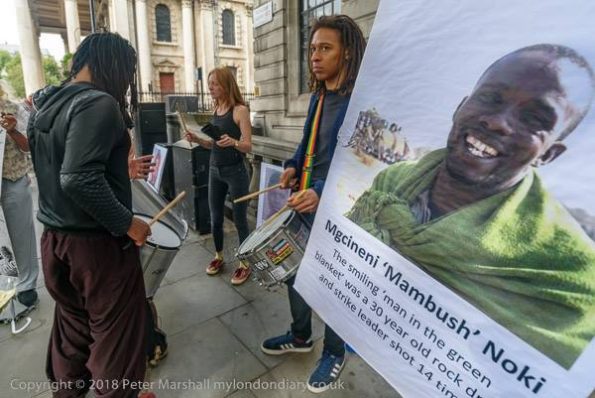 This August is the seventh anniversary of the Marikana Massacre, when 34 striking mine workers at a platinum mine in Marikana, South Africa, were shot dead for demanding a living wage.

The takeover by Sibanye-Stillwater is the latest blow to the community’s struggle for justice and accountability since 2012.

What has London got to do with it?

The one-for-one buyout leaves former Lonmin investors holding 9 percent of Sibanye-Stillwater shares. The London-based asset management funds investing in Lonmin – Investec and Majedie – are also Sibanye-Stillwater investors, as is Exor on behalf of the billionaire Agnelli family, amounting to over 20 percent of the new owners’ shares.

Sibanye has the worst health and safety record of all the mining companies. 20 mineworkers were killed in its mines in the first six months of 2018. Sibanye’s takeover went ahead despite objections from the mineworkers union AMCU that it will lead to over 12,000 job losses.

Accessibility: This vigil is outside South Africa House in Trafagalar Square. It is flat but extremely busy without seating. The nearest toilets can be found in cafes and pubs a two-minute walk away. We will be using a sound system and megaphone. Let us know if you need a seat or if you have any questions, please email mambushlives@gmail.com or contact@londonminingnetwork.org

Image shows two members of a samba band playing on their drums at a vigil for Marikana, with a poster of one of the striking mine workers who was killed.