The climate revolution is a feminist one! 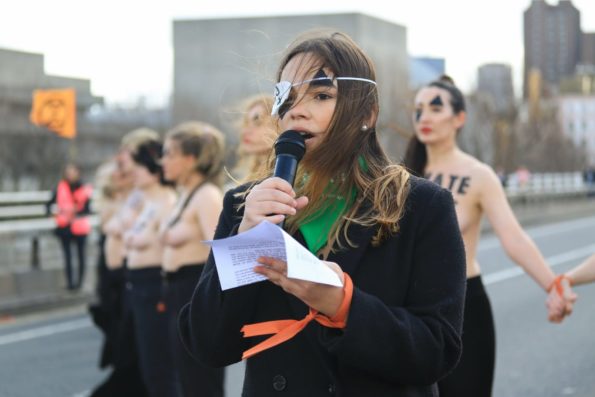 Chilean activist and LMN volunteer Javiera Martinez took part in an action with XR in central London today to mark International Women’s Day. They blocked Waterloo Bridge for the action that made the links between climate justice and justice for women around the world. This is Javiera’s speech below:

“I am Javiera Martínez, from Chile, Latin American and part of the London Mining Network, where we work together with indigenous communities that have been affected by the mining extractivism of companies based in London. I am here with my green scarf that represents our feminist struggle in Latin America, which is anti-neo-liberal, anti-extractive, anti-racist, anti-colonial anti-patriarchal and dissident. Also with my eye-patch that represents all victims of eye damage and human rights violations in Chile by the government of Sebastián Piñera.

Currently in Chile we have more than 4,000 people injured and 400 of them with severe injuries and they have lost their eyes for demanding dignity, like the case of Fabiola Campillay, a 36-year-old women. Similarly, hundreds of women have been victims of sexual political violence by the police. I am here representing my people and the Latin American feminist struggle who are demanding justice and rights. 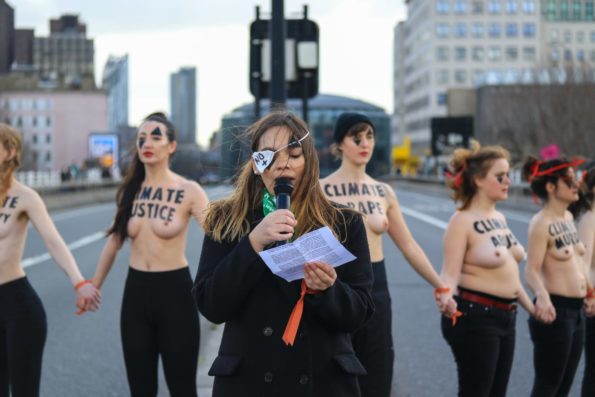 In Chile we are experiencing a deep political and social crisis after 30 years of systematic abuses and human rights violations. What is the cause? Neo-colonialism and the neoliberal system that has led to the precariousness of our lives, which has benefited the extractivist system, which degrades our land and exploits our nature; this has been killing us for years. We are experiencing a tremendous climate crisis and it is our people, our poorest people and our women who are the most affected. While large extractive companies keep accumulating wealth in the countries of the Global North, our people, fauna and water are being consumed.

This fight is an historic struggle, in this moment, more than a million people are demonstrating in Chile to demand justice for all these abuses. We are here for all the women that have been fighting for our rights, because we are an important productive force and are women who have historically defended our territories, our water and our rights.

Today in Chile and Latin America, as a result of the climate crisis, we have a mega drought, a water crisis never seen before. As a consequence of the extractivist action our land is getting dry and millions of women have lost their main source of development due to lack of water. But that is not all! when we demonstrate we have been killed, tortured and raped.

Statistically, Latin America is the most dangerous place in the world for female environmental defenders, who are knowledgeable about the land, who fight silently from their communities or from their position as leaders, they have suffered violence and repression. Today, I would like to remember Berta Cáceres, an indigenous activist from Honduras who spent her life fighting to defend the Gualcarque River and that, after threatening to oppose the Agua Zarca hydroelectric plant, was killed.

I want to remind all those women, who are rivers that flow in resistance, who know that the feminist struggle comes in conjunction with socio-environmental justice and for them, our call is not to leave the streets, keep fighting, keep denouncing.

Abrir la chaqueta! – I have to take off my clothes!

The revolution will be feminist or it won’t be a revolution!