As Rio Tinto pours money into mining-affected communities to fight Covid-19, dissident shareholders tell the multinational to clean up its act

A coalition of human rights organisations are holding an online week of action to challenge one of the UK’s largest mining companies, Rio Tinto, ahead of its annual general meeting (AGM). On Wednesday 8th April between 11am-1.30pm in homes across the globe, groups and individuals are being invited to share photos on social media with slogans such as ‘Rio Tinto, clean up your mess’ and post videos using pots, pans or instruments as part of a virtual protest.

On 1st April, Rio Tinto announced that it would hold its UK AGM behind closed doors, with only the minimum required quorum of shareholders present in order to conduct the business of the meeting. (1) 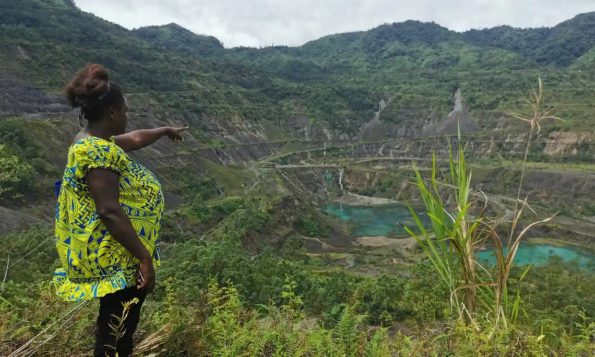 Despite this, representatives of Rio Tinto-affected communities from Mongolia, Bougainville and Madagascar will challenge the company’s toxic legacy, violations of human rights and attempts to greenwash its image during a shareholder’s conference called after the AGM.

In Mongolia, Rio Tinto is depleting water in the southern Gobi Desert for their copper Oyu Tolgoi mine, destroying the life-sustaining resource of local nomadic herders. The company has started UNCITRAL arbitration (2) against the Mongolia government so as to avoid paying all its taxes.

In the pacific island of Bougainville, the company pulled out of its Panguna gold-copper mine in 1989 after sparking a civil war. Three decades later it has still not cleaned up its toxic mining mess. Demands (3) of the company include an immediate commitment to funding an independent assessment of the mine to identify the most urgent health and safety risks to communities.

Theonila Roka Matbob, a local teacher and traditional landowner from Makosi village downstream of the mine said: “The Panguna mine devastated our communities physically and culturally and we are still living with the consequences. Our land is destroyed and our rivers are poisoned. Kids are drinking and bathing in the polluted water and getting sick. New areas of land are still being flooded with the waste from the mine. We urgently need Rio Tinto to come back and deal with these problems so our communities can find healing.”

Rio Tinto’s QMM ilmenite mine is contaminating a vital water source with lead and uranium where 15,000 people live in one of Madagascar’s poorest regions, Anosy. The majority have no potable water sources and draw their drinking water from the lakes and rivers around the mine, exposing communities to pathogens and heavy metals. Local villagers are already facing food insecurity, lost lands and livelihoods due to QMM operations. Demands of the company include safe drinking water, and transparent communication with communities about radiation around the mine site.

Civil society representative, Eryck Randrianandrasana from Publish What You Pay Madagascar (PWYP MG) said: “despite its positive promises and the amounts injected into the local municipality through payments from QMM, rural populations in Anosy do not feel or see a beneficial impact of this investment. QMM consultation processes are not transparent. Local people and Malagasy civil society have no means to hold the company to account when they do not adhere to approved commitments.”

There will also be questions made about its Resolution Copper (jointly owned by Rio Tinto and BHP) mining project in Arizona, United States, which, if given the go ahead, will destroy Oak Flat, a site sacred for indigeneous Apache people.

Like other major mining companies, Rio Tinto is working to position itself as a human rights and climate hero that will provide sustainable metals for a green future. The testimonies of communities affected by Rio Tinto and the company’s history of leaving behind mining disasters in climate-critical ecosystems tells a different story – we cannot mine our way out of the climate crisis.

(1) The London-listed company’s Articles of Association (rules that guide a company’s operations & purpose) state that the AGM must be held in a physical location and/or using an electronic platform. It is not clear whether Rio Tinto have changed these rules. They have also not specified who will be attending the AGM nor where it will be held, after its original venue, the QEII Centre in Westminster, closed due to the UK government’s social distancing measures. Shareholders are invited to a 90 minute conference call after the AGM instead, with the choice of submitting questions in advance or calling in and joining a queue to ask a question live. It is vital that affected communities are able to ask questions directly to the company’s executive board, but we are concerned that the format of this meeting undermines democracy and transparency for stakeholder and shareholders. Attending AGMs as dissident shareholders is also an essential part of the advocacy work of London Mining Network.

3) Read Communities seeking redress from Rio Tinto for background information on the communities affected by the company’s mining operations and their full demands.