Translated from the original by Paul Robson and Javiera Martínez

On 26 April 2022, the activities of the Brazil Iron mining company were forbidden by Institute of the Environment and Water Resources (INEMA) because of the cutting and burial of native vegetation in the Riacho do Lameiro APP (Permanent Preservation Area), also known locally as Córrego do Riachão, and because of the encroachment of mining beyond the limits allowed by the prospection licence  obtained from the Institute.

The Riacho do Lameiro is a tributary of the Córrego do Mocó, and this in turn is a tributary of the Rio de Contas. The area of vegetation cut and buried in Lameiro covers three hectares and directly interferes with the bed of this watercourse. As can be seen in Figure 1, in 2019 the vegetation in this area had not been removed; in 2022 the removal of vegetation can be seen to be in progress, including the construction of a road by Brazil Iron on top of the watercourse burying it and interfering with its natural course.

Another tributary of the Rio de Contas that has been impacted by Brazil Iron for more than three years and that has never had any attention from INEMA, despite several complaints and reports from residents in various public events, is Rio do Bebedouro. It captures water from several ephemeral springs and, further down, perennial flow from the water table, and is popularly known by the quilombola community of Bocaina as “Bebedouro Spring” (Figure 5). It has this name because, in times of drought, it is from this stream that most of this community was supplied. But in 2019, deforestation could already be observed at its main source, located high above the perennial outcrop. Of its eight springs, five have suffered interference due to the construction of unpaved roads by Brazil Iron near and on top of these springs, two have been preserved southeast of Morro do Garimpinho (outside the mining area), and the mainspring is affected by clearance of vegetation and buried with Brazil Iron mining tailings (Figure 4), over an area of ​​22 hectares.

When it rains, all the ore tailings go down the course of the Bebedouro, silting up wells and small dams that used to serve the Bocaina community (Figure 6). The Bebedouro River is no longer suitable for consumption, and households that depended on this water now have to have water piped in from a more distant location, in a network that supplies most of the Bocaina households; but in periods of drought, water hardly ever reaches the residences that were supplied by the Bebedouro River, because of the distance.

A quilombola family that took out a loan from a bank to carry out a fish-farming project had problems paying the bank because, after the loan, mud entered the pond that was part of the fish-farming project and also available for leisure activities (Figure 7). Unable to carry out the project due to the iron ore tailings sludge in the pond, they had to sell beef and dairy animals to pay back the bank, and abandoned subsistence family farming in the area because they could no longer use the water from the Bebedouro on their farm.

Brazil Iron has now informed the community that it is going to remove the tailings from the bed of the Bebedouro stream, and that they have constructed a dam so that rainwater does not carry the tailings back to the Bebedouro. This is another concern, as it is not known whether the engineering used in the tailings dam is safe, and there is no evacuation plan in case this dam breaks, which would take all the tailings down at once, interfering with downstream communities and the course of the Rio de Contas itself, preventing the use of its water (Figure 8). 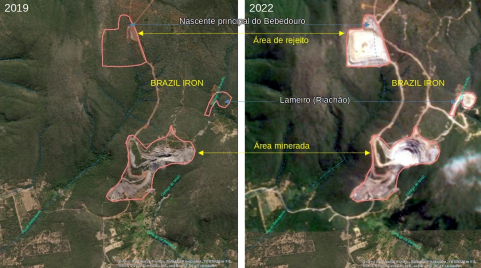 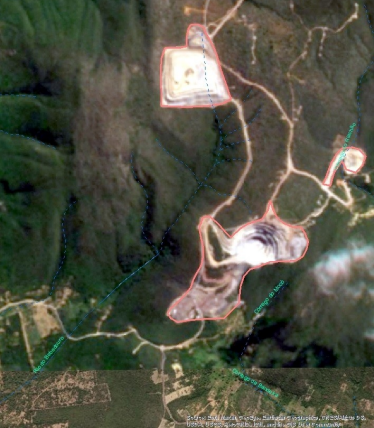 Figure 4 – P1 = Ore tailings on top of the Bebedouro spring

Figure 8 – Illustrative map of the tributaries of the Rio de Contas located in the communities of Bocaina and Mocó, and in the mining and tailings disposal area of ​​the Brazil Iron mining company

The degradation of water resources in the Bebedouro River is worse than in the Lameiro (Riachão), both in its environmental and socioeconomic aspects, because the greater duration of activity in its Permanent Preservation Area (APP) and the dumping of tailings of iron ore in the main source of Bebedouro, without action by public authorities, in addition to the transit of light and heavy vehicles on unpaved roads opened by the mining company Brazil Iron on top of other water courses and sources of Bebedouro. This caused and still causes abandonment of gardens and subsistence projects, and problems for supply of services to nearby residences.

With the paucity of information from representatives of the Brazil Iron mining company about the current iron ore tailings dam, intended to ensure that tailings are not carried to the Bebedouro, the quilombola community of Bocaina and the communities downstream are unaware of the engineering used and any action being taken to prevent possible risks to the dam, as well as being unaware of any evacuation plan, if there is one. Any accident at the dam could cause a tragedy in the downstream region, if the dam is not maintained to the highest possible safety standards. It is essential to do this in order to avoid disasters such as those that occurred in Mariana (2015) and that of Brumadinho (2019), both in Minas Gerais, which caused deaths and environmental degradation without recovery plans and other conditions, affecting the entire riverside population along its entire course up to its mouth, even to this day interfering with marine life and the regional economy (Figure 9).

The practice of open illegality in the springs and other Permanent Preservation Areas (APP) of the Rio do Bebedouro by the mining company Brazil Iron has recently begun in Lameiro (Riachão), leading to the current legal action by INEMA. It is not understood why INEMA did not include the Bebedouro case as a justification for forbidding the activities of the Brazil Iron mining company, since the degree of degradation is much higher than in Lameiro, without differentiating the environmental importance of both.

The burial and suppression of native vegetation at the sources of the Bebedouro and the disposal of iron ore smothering its main source, both carried out by the mining company Brazil Iron, and negligence by the agencies responsible for defence of the environment and the rights of quilombola and traditional communities in the face of the crimes committed against their natural environment, on which the quilombola community of Bocaina depends for their subsistence and maintenance of their culture and ancestry, constitutes Environmental Racism.

“Today, the source of the Bebedouro urgently asks for help.

The one who asks you is the spring that has always gushed limpid waters.

No matter how valuable the ore is, tell me, son, be honest:

How much do you estimate my worth?”