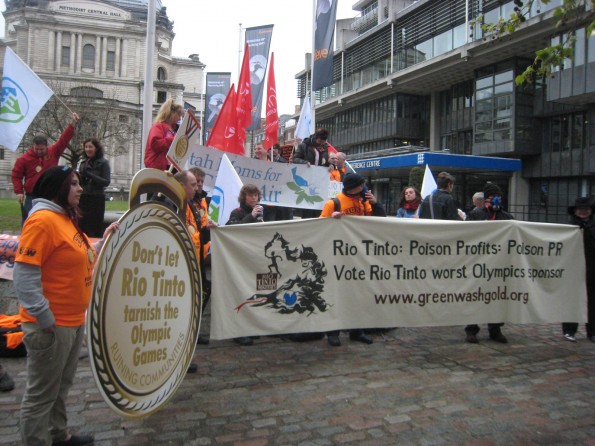 Workers from Unite the Union and the International Transport Federation joined workers locked out by Rio Tinto Alcan at the company’s Alma, Quebec, aluminium smelter, outside this morning’s London Annual General Meeting of Rio Tinto.
They were joined by Utah Moms for Clean Air, protesting against Rio Tinto’s contribution to premature deaths in the Salt Lake City, Utah, area; Zanaa Jurmed, from Mongolia, challenging the company over water use and violation of Indigenous and worker rights at its Oyu Tolgoi mine; women from Michigan objecting to water and air pollution and violation of Indigenous sacred sites at the company’s Eagle nickel mine; West Papuans protesting against Indigenous rights abuse, militarisation and environmental destruction at the Grasberg copper-gold mine; and representatives of Kick Nuclear, objecting to the company’s uranium production.
Visit the Greenwash Gold 2012 website at http://www.greenwashgold.org and vote for Rio Tinto as the worst 2012 Olympic sponsor! 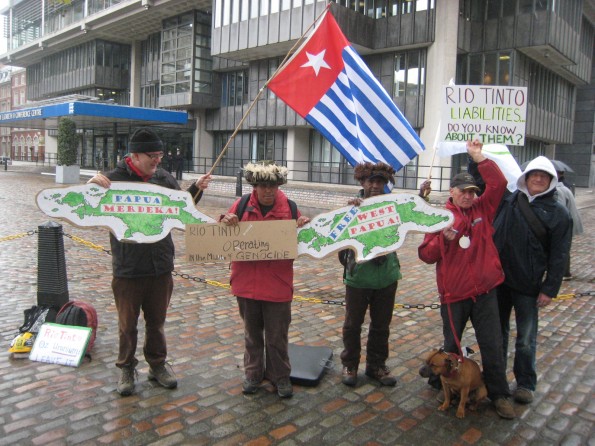