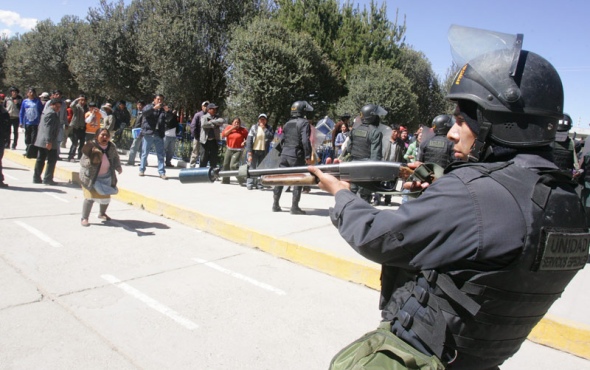 Take action: participate in Amnesty’s letter-writing campaign.
Máxima Acuña and her family, who are subsistence farmers, are in a dispute with mining company Yanacocha over the ownership of the plot of land where they live in Tragadero Grande, Sorochuco district, Cajamarca region. Both Yanacocha and Máxima Acuña’s family claim to own the land. In July 2013 a court annulled a 2012 ruling which found the family guilty of illegal occupation of the land following a case brought on by the company.
Máxima Acuña received a death threat over the telephone on 30 January and has been repeatedly harassed by police. She is in an ongoing legal dispute against a mining company over the ownership of a plot of land where she and her family live in northern Peru. They are at constant risk of forced eviction, attacks and threats from police.
Yanacocha is 51% owned by Newmont, a US company with British investment: among investors in Newmont are UK-based Blackrock World Mining Trust and AXA Investment Managers UK.