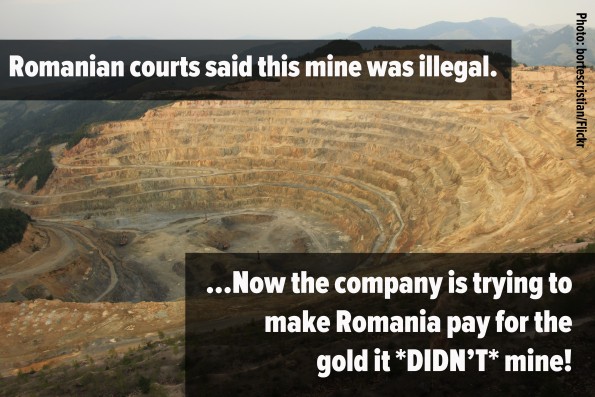 Re-posted from Save Rosia Montana:
July 21, 2015. This is the date when the locals of Rosia Montana obtained a subtle confirmation that their village is saved from the destruction of Gabriel Resources. The company admitted yesterday in a press release that they have lost hope in ever mining Europe’s largest gold deposit. At the same time Gabriel Resources announced the submission of a Request for Arbitration at the World Bank’s International Centre for Settlement of Investment Disputes. They demand compensation and a special settlement from the Romanian state for failing to harvest 314 tonnes of gold and 1,500 tonnes of silver, expropriating hundreds of local properties and leaving behind a waste lake containing cyanide – a toxic chemical used in the process of gold extraction.
Romania’s largest civil society movement opposed Gabriel Resources. This citizen involvement was, without exception, directed towards the state and respect for its own laws, seeking out irregularities and pinpointing corruption at all levels of power.
The defeat of Gabriel Resources is a clear indication of the commitment of Romanian citizens to defending their rights, freedom and democracy. The 15-year long campaign to Save Rosia Montana contributed to building a young democratic movement in Romania and has led the country in a direction that cannot be reversed.
The company’s plans to start the project did not crumble due to the high level of corruption in Romania, indeed Gabriel Resources have only got this far because of the corruption. The Romanian state got stronger and more independent only when corrupt officials were exposed. There is no possibility of saving Romanian taxpayers’ money if officials within the Government do not fight the good fight, if they, for example, hire a law firm closer to a mining company than to public interest.
This arbitration case proves once again that the ISDS clauses are being used to plunder people and nations of budgets allocated for health or education. In response to this, the Save Rosia Montana campaign demands total transparency and accountability from the authorities and all legal representatives present at all stages of the process.
“This arbitration illustrates that companies such as Gabriel consider profit more important than people; that the will of a few  ‘Wall-Street billionaires’ has greater legitimacy than the legislation of a whole nation. There are three known facts about this mining project: it was deemed illegal by national courts on several occasions, it was unwanted by the local population as well as millions of ordinary people country-wide,  it was promoted by numerous politicians since charged with corruption and in many cases already serving long jail sentences. Why Gabriel investors continued to invest throughout 15 long years in such an obviously bad deal, remains a mystery”, commented Eugen David, president of the Alburnus Maior Association.
Romania must not be penalised for being a democratic country with institutions prepared to say no to absurd actions designed to alter national legislation so that a mining project becomes legal. The company sought these changes after years of unsuccessful attempts to get their illegal project approved. These modifications to legislation included the framework for a private company to expropriate citizens of their legally owned property.
“The Save Rosia Montana campaign asks all its friends and supporters for solidarity against ISDS clauses and corruption. We stand united to save Rosia Montana!”, added Eugen David.
For more information please contact Tudor Bradatan, alburnusmaior@ngo.ro, mobile: 0040 745370524