Ditch Coal Speaking Tour: the realities of coal mining in Russia – 25 May to 10 June 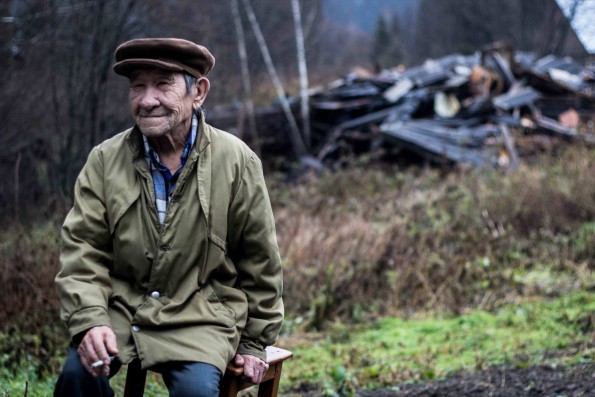 “Mining is going on a hundred metres away. When they started blasting, all the dust was brought to our vegetable gardens. Vegetables got covered with the coal dust, which is impossible to wash out. Now I don‘t want to harm myself by eating anything from this garden,” a resident of Kazas, Siberia, Russia, describes the impact of coal mining.
The London Mining Network and the Coal Action Network are heading off on tour with a Russian environmental activist who has witnessed first hand the impacts of the UK’s burning of coal on indigenous people.
“The consequences of coal mining in Russia are terrible. There are environmental and economic disasters happening in mining regions, especially in Kuzbass where most ofthe  coal reservesare  located. Public health is getting worse and worse, indigenous people are being forced out of their land, air and water are being poisoned,” says Vladimir Slivyak of Ecodefense.
The UK imports two thirds of the coal it burns in its remaining nine coal fired power stations. In 2015, 24% of our electricity came from burning coal. Just under a third of this coal comes from Russia.
Vladimir, a Russian anti-coal activist, is visiting the UK for a speaking tour starting on 25 May in Brighton before touring around the UK and finishing on 10 June in London. Full details of the tour can be found here. He will discuss the problems caused by mining for the UK’s power stations in his home country, while the Coal Action Network discuss how we can act to end the destruction.
The tour is part of the launch of Ditch Coal, a new report from the Coal Action Network released earlier this year. It tells the human and localized environmental story of the coal burnt in UK power stations. The climate change impacts of burning coal are well documented, but somehow hard to relate to in a concrete manner. By contrast the stories of those living in the shadows of the mines are somehow more tangible, being direct human experiences being felt already.
The tour will be joined by local community campaigners fighting opencast coal operations in Sheffield, Newcastle and Edinburgh. Speakers from Colombia Solidarity Campaign will join at Brighton, Newcastle, Cambridge and London.
The problem in Russia
The Siberian village of Kazas was surrounded by opencast coal mines and had a population of predominantly indigenous Shor people. Kazas was entirely destroyed in 2014 to make way for the expansion of the mines, although the villagers did not all consent to leave. The problems of this village are not unique. For each tonne of coal produced, six hectares of land is disturbed, land which was home and habitat to both people and wildlife before the mining companies’ encroachment.
Prior to the destruction of Kazas, pressure was applied to get families to move. Infrastructure was no longer maintained – roads were not cleared of snow in winter and clean drinking water was no longer provided. With only 6% of water from the mines being treated, filthy water killed the fish, and the wildlife dispersed, preventing the traditional economic activities of the Shor people – hunting and fishing.
Communities in the coal mining regions struggle to have their objections heard, as the system is stacked against them. Decisions about mining applications are heard away from the ancestral lands which are threatened, so those affected cannot attend hearings.
The worsening situation for the residents meant that many agreed to leave. For those who didn’t the outcome was more sinister: their homes were destroyed by arson.
The village of Kazas now only exists in the memories of the people who lived there. “Chuvashka is the Shors’ only village in this area. In the 1990s, about 16,000 Shors were living here. Today, there are just between 4,500 and 5,000 people here” said a Shor woman in Ecodefense’s film Condemned. Eight other villages in the area have been destroyed.
The mining exploits in the Kemerovo region have left many of the indigenous Shor homeless, or displaced to other areas, which severs their spiritual, cultural, and practical attachments to the land. No adequate substitute land, nor compensation, has been offered to them. The Kemerovo Oblast, where most of the Shors and Teleut live, produces 60% of Russia’s coal for export.
The Russian coal industry also has the most dangerous working conditions of any industry in terms of risk to life and welfare, with 40-50 fatal accidents each year, killing 180-280 people annually, mainly in the deep mines.
Why is the UK burning Russian coal?
In the year to August 2015, 31% of all thermal coal burnt in the UK came from Russia. Since 2005, Russia has supplied the UK with more coal than any other country – coal is cheaper from Russia than anywhere else, which is why we burn so much of it. There is little transparency in the coal supply chain and large volumes. 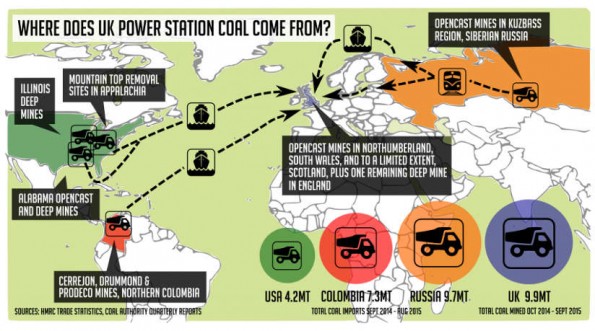 Where else does coal come from?
32% of the coal used in the UK was extracted in Britain in the year to September 2015. Here opencast mining operations have continually faced resistance from those living in the shadow of mines and proposed sites. At the end of March 2016 there were 21 opencast mines working, a number which is decreasing. There are no longer any underground coal mines in this country.
Colombia is known for its human rights abuses, yet it supplies 23% of the coal imported to the UK. Over 90% of Colombian coal production occurs in three large-scale open cast mining operations in the northern departments of La Guajira and Cesar. Communities close to the mines suffer the same problems in terms of forced relocations as those neighboring Russian mines. Additionally there have been links made to assassination attempts on those who speak out against the mines, mass killings and violence.
Most of the 14% of coal coming to the UK from the USA is from damaging longwall mining systems – where the material over the coal is intentionally collapsed as the mine progresses – or from opencast or mountaintop removal mines. Both of these methods destroy huge areas of land, displace people and damage the water table. During mountaintop removal coal mining is destroying entire mountain ranges in Appalachia.
The Coal Action Network is working with grass roots groups on campaigns to close the UK’s remaining coal fired power stations. Come along to one of our tour dates to find out why we must close these power stations and to see how you can get involved.
Full tour details at www.coalaction.org.uk/tour