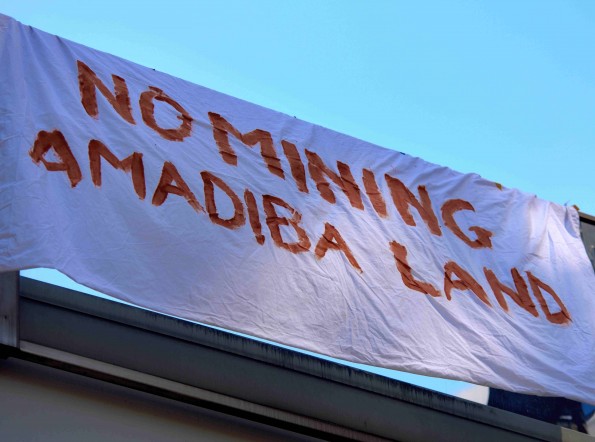 Report by Hal Rhoades, The Gaia Foundation
Protestors from several organisations gathered in London yesterday to call on British millionaire Graham Edwards to help end Australian mining company Mineral Resources Limited (MRC) involvement in a controversial Xolobeni titanium mine on South Africa’s Wild Coast, or else divest his shares in the company.
British property magnate Edwards is a major shareholder in MRC and so has major influence within the company. As the sole owner and director of AU Mining Limited, he holds 96 million shares in the Australian company, which amounts to an estimated 23.6%.
MRC’s plan to mine a 22 kilometre strip of South Africa’s Eastern Cape for titanium has met sustained resistance from the local Amadiba community, the vast majority of whom are opposed to the mine.
South Africa’s Eastern Cape Department of Development, Environment and Tourism has succinctly reported the reasons why the community favour community-led alternatives to mining, such as eco-tourism:
“It (the mine) would require moving communities away from the area, destroying their livelihoods in the process, and potentially causing irreparable damage to the surrounding environment and curtailing any hopes of developing a viable ecotourism industry in the region over the medium to long term.”
MRC’s continued presence in the region despite community opposition has allegedly caused social division and serious violent incidents. The latest of these came on 22nd March this year when chair of the Amadiba Crisis Committee (ACC) and outspoken opponent of MRC’s mine, Sikhosiphi ‘Bazooka’ Radebe, was assassinated outside his home.
MRC denies any responsibility for violence and killings in the area, but the company’s attitude and intentions have come under serious scrutiny over comments made by executive chairman Mark Caruso. In a 2015 email, Caruso wrote:
“From time to time I have sought the Bible for understanding and perhaps I can direct you to Ezekiel 25.17… And I will strike down upon thee with great vengeance and furious anger, those who attempt to poison and destroy my brothers. And you will know my name is the Lord when I lay my vengeance upon thee… I am enlivened by [the] opportunity to grind all resistance to my presence and the presence of MSR [the South African subsidiary of Mineral Commodities] into the animals [sic] of history as a failed campaign.”
Equipped with a megaphone, leaflets, banners and placards members of Marikana Miners Solidarity Campaign, Movimiento Jaguar Despierto, London Mining Network, The Gaia Foundation and War on Want reminded Mr Edwards of the bloody violence that has engulfed the Amadiba community and the opportunity he has to help end it as a major shareholder.
The call from groups in the UK and South Africa is for Edwards to use his influence and encourage MRC to abandon the Xolobeni titanium project accoridng to the wishes of the Amadiba Community, or else to divest his shares in the company. With MRC’s AGM in Australia approaching on the 25th May, now is the time for Edwards to contemplate his involvement and take action.
A powerful statement from ACC member Nonhle Mbuthumba read aloud at the London protest, clearly demonstrates that if Edwards and MRC continue down their current path, they do so against the wishes and hopes of the Amadiba Community:
“There will be no mining on the Wild Coast. There will be life, there will be peace and there will be development supported by the people.
Mining will not pass – IMINING AIYPHUMELELI!”
Protesters released a video of solidarity statements after the event.