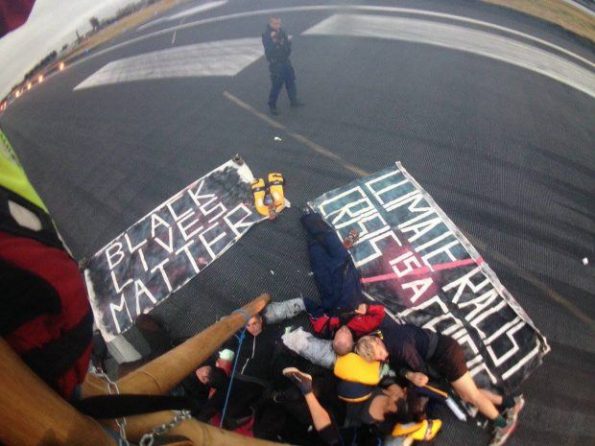 London Mining Network has signed a solidarity statement with the Black Lives Matter movement in the wake of its recent occupation of London City Airport. Black Lives Matter has come under attack for saying that the climate crisis is a racist crisis.
London Mining Network works in support of communities around the world affected by mining by companies based in, or funded from, London. We and our member groups work, among others, in solidarity with communities of colour who are suffering as a direct result of coal mining by London-linked companies: Indigenous Cree and Dene people in Canada; Indigenous Wayuu people and people of African descent in Colombia; Indigenous Dayak people in Indonesia; Indigenous Shor people in Russia; and others. Not only is climate change having a disporportionate impact on people of colour around the world, but the mining of coal and drilling of oil which helps drive climate change has a disproportionate impact on people of colour as well. Of course, white communities also suffer from environmental and social abuses committed by mining companies, but people of colour, particularly Indigenous Peoples, suffer disproportionately.
Solidarity Statement
We stand in solidarity with Black Lives Matter UK and fully support the inspiring shutdown of London City Airport that they led on 6 September to oppose the airport’s expansion.
We agree that the climate crisis is a racist crisis.
The proposed expansion of City Airport will enable rich, mostly white business people to fly more easily at the expense of the local community in Newham.
As BLM UK points out,  “when black people in Britain are 28% more likely to be exposed to air pollution than their white counterparts, we know that environmental inequality is a racist crisis.”
It was white British capitalists who pioneered the use of fossil fuels and the UK has contributed more per person to global temperature change than any other country.
Backed by the government, British companies such as BP carry out the extraction of fossil fuels in countries across the Global South in ways that steal wealth, violently destroy communities and their environment and represent a form of modern day colonialism.
Meanwhile, it is countries and people in Africa and elsewhere in the Global South that are and will be the most impacted by the climate crisis.
The proposed expansion of City Airport comes as the UK government uses planes to deport people while making it as hard as possible for migrants and refugees to travel to the UK by plane or other safe methods. We must fight against the racism that allows more than 3,120 migrants to die in the Mediterranean fleeing conditions they did not create and we must fight for the rights of the 200m refugees that the climate crisis will create by 2050.
We encourage people to view and share BLM UK’s recent video about how the climate crisis is a racist crisis. We thank BLM UK for their work and actions to bring forward their analysis. We commit ourselves to supporting BLM UK and to integrating their analysis into our political work.
Other organisations to sign the statement include: 350.org, Art Not Oil, Campaign Against Climate Change, Dharma Action Network for Climate Engagement (London), Friends of the Earth Scotland, Grow Heathrow, Heathrow 13, London Palestine Action, London Rising Tide, Move Your Money, People and Planet, Plane Stupid, Platform, Reclaim the Power and South-West Essex Fight the Flights.
You can sign up to statement here.