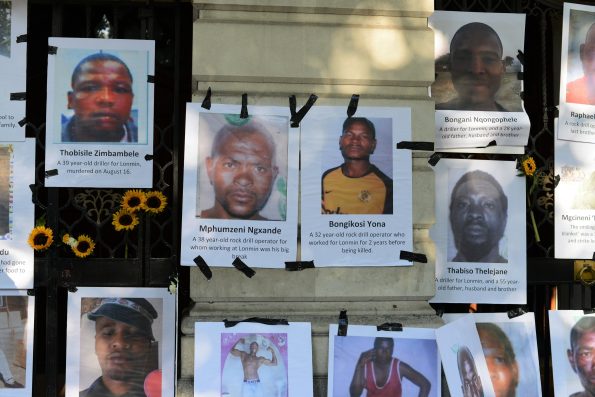 Commemoration of the anniversary of the Marikana massacre, which occurred during a strike at Lonmin’s platinum operations in South Africa.

Several of the companies mentioned in the press release below, and the accompanying letter, are listed in London.
29 November 2017
The Justice and Peace Commission for Southern African Catholics Bishops Conference (SACBC) has today written an open letter to 21 mining companies operating in South Africa asking each to explain why it is using tax havens.
New research conducted for the SACBC shows that these 21 companies, which include some of the largest in the country such as Anglo American, AngloGold Ashanti, Impala Platinum, LonMin and Petra Diamonds, all have subsidiaries in tax havens, also known as secrecy jurisdictions: these include the British Virgin Islands, Cayman Islands, Mauritius, Jersey, the Netherlands and Bermuda. The 21 companies collectively have 117 subsidiaries in such tax havens.
The SACBC is not accusing these companies of engaging in tax avoidance. It is the case, however, that the risk that companies generally may engage in tax avoidance is heightened by their use of tax havens and the inability of outsiders to scrutinise adequately their tax affairs. The SACBC is asking these 21 companies what purpose is served by having some subsidiaries in tax havens.
To take two examples:

Of these and other companies, the SACBC is asking each company how many employees these subsidiaries employ, what tax advantages the company receives by having subsidiaries in these tax havens and whether the company is willing to report its key financial figures on a country-by-country basis in all countries where it operates.
Tax avoidance and tax havens present major problems to governments seeking to maximise the resources available for public spending. Globally, tax avoidance by multinational companies amounts to hundreds of billions of dollars; one recent estimate is $500 billion.(3)
For further information, kindly contact:
Bishop Abel Gabuza, email: dagabuza@gmail.com
1 Annual Report 2016, pp.167-171, http://southafrica.angloamerican.com/~/media/Files/A/Anglo-American-South-Africa-V2/documents/annual-report-2016-interactive-v2.pdf
2 Annual Report 2016, p.134, https://www.petradiamonds.com/wp-content/uploads/Petra-Diamonds-Limited-Annual-Report-and-Accounts-2016-1.pdf
3 Alex Cobham & Petr Janský, ‘Global distribution of revenue loss from tax avoidance: Re-estimation and country results’, WIDER Working Paper, 2017, https://www.wider.unu.edu/publication/global-distribution-revenue-loss-tax-avoidance
The letter is available to download at the link below.
SACBC open letter. 29 November 2017-1