Controversial Rio Tinto and BHP Resolution Copper mine project was proposed 15 years ago but is yet to get off the ground. Released today to coincide with BHP’s annual general meeting, the report, Potential Impact of Geothermal Water on the Financial Success of the Resolution Copper Mine, Arizona, calls into question the technological viability of the mine design.

The proposed mine, near Phoenix, Arizona, is an ecological and recreational haven called Oak Flat, public land that is sacred to the indigenous Apache people. If the mine is given the go-ahead, it would bury 5,000 acres of public land under 1.5 billion tons of toxic waste (mine tailings). The Resolution Copper project would use a seldom used technique called block caving to mine a copper ore deposit of one cubic mile, a mile underground. 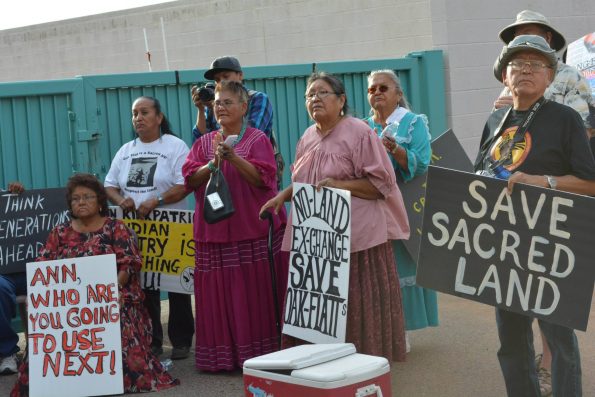 The report is authored by retired Geology professor Dr. Steven Emerman, on behalf of Arizona Mining Reform Coalition. It reveals that the unanticipated encounter of geothermal water in an exploratory shaft for the underground mine would increase power requirements for mine dewatering and cooling by at least 24 megawatts, in addition to increased costs of ventilation and corrosion of equipment.

The failure of Rio Tinto, the lead mining company for the project, to estimate total power requirements and to seek power sources besides the local grid leads to serious concerns regarding the profitability of the project.

After 10 years of attempts to privatize the land through federal special legislation, Resolution Copper released a mine plan in 2014. This plan is under review by the US Forest Service, who have yet to decide whether to permit the mine.

Roger Featherstone from Arizona Mining Reform Coalition says: “We have always known that the Resolution Copper proposal poses unacceptable environmental and cultural risks to Oak Flat and the surrounding lands and town. I am in London for BHP’s annual general meeting to ensure the report findings are heard by the company’s executives and shareholders. Everyone, including investors, should be very concerned about this untenable project.”

Report author Dr. Emerman says: “It is shocking that the 2,395 pages of the General Plan of Operations do not include any estimate of total power requirements or any source of power except for the local grid of the Salt River Project. Even a business plan for a one-man machine shop would estimate power requirements and would assure the bank that an adequate source of power was available.”

Roger Featherstone will be in London until 21 October. To arrange an interview or for further information contact: