Anglo American, a London-listed mining company, has caused unimaginable damage to communities and the planet through its disregard for human rights, the environmental devastation caused by its projects, and its neo-colonial policies in Colombia, Brazil, Peru, Chile, South Africa and elsewhere.

Join us for a vigil outside the company AGM to coincide with the arrival of shareholders. We’ll be making the company’s investors aware of the true impacts of their investments on people and planet, and standing in solidarity with our partners and communities in the global South who are resisting Anglo American’s destruction.

Accessibility: The protest venue is flat and five minutes walk from Westminster underground station. The nearest accessible toilets are two minutes walk away in Central Hall (see building-specific accessibility information). A portable sound system will be used for speeches. There will be some photography and filming with phones and SLR cameras, flash photography is unlikely. There are no seating areas. Email contact@londonminingnetwork.org if you require a foldable chair or for other information on accessibility. 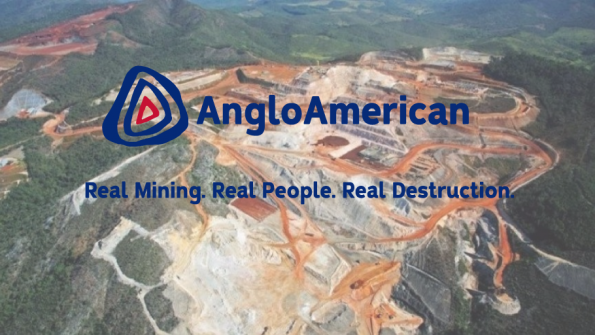 What Anglo American’s logo should say…

Mining corporations like Anglo American – which is over 100 years old – are responsible for the climate crisis, yet today, they present themselves as solution-bearers to the ecological crisis devastating our planet, rather than as the enablers and dirty polluters they really are. With false solutions such as FutureSmart Mining, their plans – far from helping us to transition away from fossil fuels – only cement the very extractive economy that violently condemns vulnerable and marginalised communities to more injustice and inequality.

Our focus is on solidarity with frontline communities…

The heart of the global mining industry beats in the City of London, where most of the world’s biggest mining companies are incorporated. Despite systematic human rights abuses, these corporations are not held to account by the UK government. Our action will platform and highlight the frontline resistance of communities defending the right to land, water and life. The right to a dignified life for all.

We’ll have banners to make investors aware of the true impacts of their investment in the company. For those who would like to engage with investors, we’ll provide leaflets outlining some of the impacts that Anglo American is having on communities across the global South and on our planet. We’ll listen to activists who have experienced Anglo American’s operations first hand and Medact members who will highlight the damage to health caused by this company.

Don’t want to arrive alone? You’d be welcome to join us for a pre-vigil lunch and discussion at the Medact offices – please RSVP and get more info on this.

The protest is co-organised by: London Mining Network, War on Want, Medact, Colombia Solidarity Campaign and others.