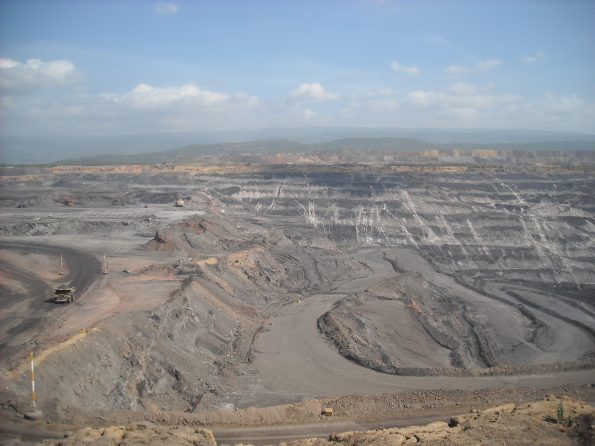 Christian Aid Ireland has published a damning report about Cerrejón Coal’s impacts on the communities around its operations. Cerrejón is owend by London-listed multinationals Anglo American, BHP Group and Glencore.

The Republic of Ireland’s only coal-fired power station, Moneypoint, has bought large quantities of coal from Cerrejón. Cerrejón’s marketing arm, CMC, is based in Dublin, benefiting from Ireland’s low corporate tax regime.

The Christian Aid Ireland report is introduced by Philip Alston, United Nations Special Rapporteur on extreme poverty and human rights and Professor of Law at New York University School of Law. It calls on the state-owned Irish electricity company Electricity Supply Board to support an independent human rights and environmental impact assessment of Cerrejón’s operations deemed acceptable by the affected communities. It says the ESB should seek effective engagement with Cerrejón to ensure respect for human rights, including communicating possible disengagement if problems are not resolved. It says the Government of Ireland should establish a transparent Policy Coherence for Development mechanism to rectify inconsistencies between international human rights law, and its tax regime, trade and greenhouse gas policies.

The reportt also says that the owners of the Cerrejón mine should take immediate action to:

• Recognise the legitimate claims of forcibly displaced communities, including those of Tabaco, Roche and others, and deliver compensation as recommended by independent arbitration, along with reconstruction of homes and other community facilities to a standard deemed acceptable by the impacted communities.

• Halt plans for further interventions in the River Bruno and commit to the implementation of a full environmental and human rights impact assessment by independent third parties deemed acceptable by the affected communities.

• Explicitly and publicly commit to the standards of free, prior and informed consent as detailed in ILO Convention 169 and the UN Declaration on the Rights of Indigenous Peoples, including the right of communities to veto any planned expansion or environmental interventions. This should include transparent processes so no local peoples are pressured in their deliberations and participate meaningfully in all stages of planning and implementation.

• Comply fully with Colombian judicial bodies, including the Constitutional Court, the Supreme Court and La Guajira District Court, along with the recommendations of IACHR on the right to remedy. Throughout this cooperation, the precautionary principle 225, as advised by the IACHR, should be prioritised in plans and decisions over how best to avoid causing further harms.In addition, the mine owners should also:

• Publicly recognise that its current environmental licence is not adequate to prevent impacts on human and natural life, and that it must be revised to bring its monitoring criteria and processes into line with international standards. This can be done by: providing differentiated data on surface and subterranean water from immediately before and immediately after all waste water dumping points; and providing data from independent analysis of water supplies delivered to relocated communities, such as Roche, Chancleta, Patilla, las Casitas and Tamaquito II.

• Contract independent human rights and environmental experts, who are deemed acceptable to local communities and Colombian civil society organisations, when reporting on its compliance with the UNGPs. Furthermore, it should ensure that local communities are enabled to fully and meaningfully participate in human rights and environmental monitoring.

• Resource and guarantee the independence of its existing complaints mechanisms and procedures to bring them into line with the recommendations of the ICJ. It should fully address and provide remedy for complaints concerning environmental and human rights harms to local communities, regardless of whether these impact expansions of the mine or of the company’s profits.

The report criticises the activities of industry organisation Bettercoal, which claims to seek to drive up standards in the coal industry but whose critics believe it to indulge in greenwashing. Bettercoal has issued a response to the Christian Aid Ireland report.