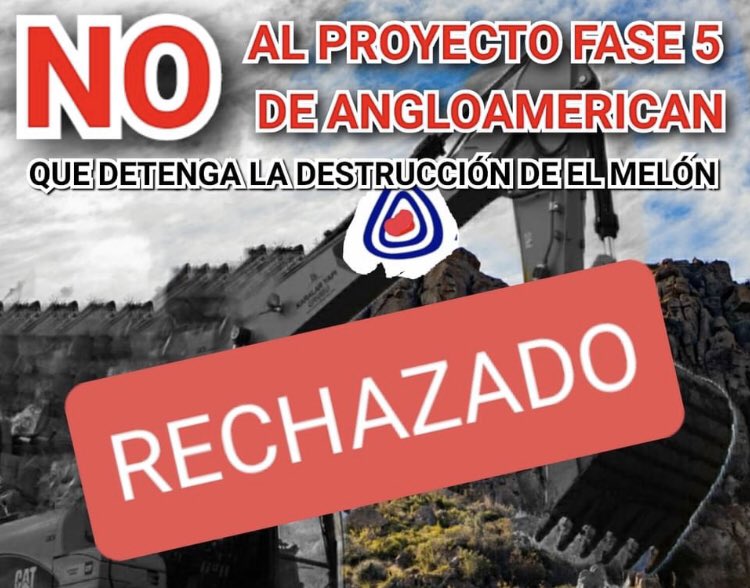 From the community of El Melón, we express our agreement and the deepest feeling of joy, for the decision adopted by the Environmental Assessment Commission of the Valparaíso Region, which decided to reject the Phase V mining project of the transnational Anglo American Sur S.A.

We consider that the evaluated project did not provide the certainties of not being affected, in the consultations on potential impacts that this could generate, both in biodiversity, ecosystems, availability and water quality, agriculture and livestock, in the communities neighboring the operation. Furthermore, in the citizens and localities that belong to other communes surrounding Nogales, mainly affected by the generation of particulate matter PM10 and PM2.5.

History already gives us full knowledge of a series of breaches that the various projects subject to Environmental Qualification Resolutions (RCA), facilitated for Anglo American Chile. From the studies carried out by the mining company, there is already evidence that they do not meet the projections performed, where the “unaffectation” is only in the speech. We know of the rampant lobby, which carries out the company Anglo American Chile to obtain favorable authorizations, we recall the reversal of the Belloto del Norte Natural Monument, which is protected by Law of the Republic, agreements agreements signed by Chile, even so via Ministerial Decree, removed said protection, all to give step to the El Torito Tailings Dam Expansion Project in 2003, affecting more than 80 centennial specimens of said Natural Monument.

We live downstream of the El Torito tailings dam, which almost collapsed in 2013, since it was not being built according to the design approved in its Environmental Qualification Resolution (RCA). In the immediate term, we value the determination shown by the Presidential Delegate and the different SEREMIS (Ministerial Regional Secretary) that, through their vote against the project “Operational Continuity Project Phase V El Soldado”, presented via Environmental Impact Statement (DIA), give us hope of being able to build a fairer society, free of pollution and with a view towards the affected communities of the various territories. The position of the votes of opposition to the project reflected the firm conviction of principles based on the need for said project (if it is resubmitted) to be submitted to a Environmental Impact Study (EIA) for being in a Priority Site for Conservation, in addition to an Area Saturated by PM10 (Province of Quillota, as well) for the effective protection of the environment, the flora and fauna of the area, the protection of small farmers and ranchers, and in general to the common citizens of our locality.

We congratulate the Presidential Delegate of the Valparaíso Region, Sofía González Cortés, and the cabinet region for the decision adopted, which is consistent with the interests of defending the rights of the environment and citizens, reflecting the majority interests to build a fairer and freer society of contamination.

We appreciate the collaboration of our brothers in the socio-environmental struggle, who contributed from different areas, first in the presentation of observations to the project, dissemination of what happens in El Melon. We thank all the organisations that adhere, accompany and strengthen day by day our common cause. This fight is undoubtedly unequal, we are fighting against a mining giant, which acts in based on the co-optation of authorities, leaders and the community in general, all actions that conflict with the ethics and good practices, protected by permissive legislation and few demands when it comes to sanctions and restrictions in the affectation of the territories.

We emphatically repudiate the interventionism in the communities of Anglo American in Chile, in the cultural, environmental, social and legal spheres.

Finally, we state that we are alert to new movements made by Anglo American Chile, in order to generate the environmental authorization for its project, which was rejected by a majority, today

MOVEMENT NO MORE ANGLO – THE MELON.