A Call to ARMS: the dumb and the dumber at Bumi 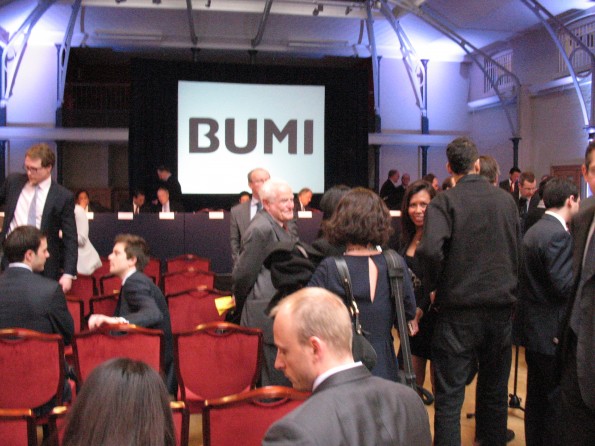 Andrew Hickman of LMN member group Down to Earth reflects on the final settlement of the dispute at Bumi plc, now renamed as Asia Resource Minerals.
You may have seen articles in the press on the twitter spat between Nat Rothschild and Aga Bakrie calling each other “dumb”, following the big Bumi split.  Nat Rothschild kindly opens up to describe Bumi Resources as a “worthless pile of turd”.
The sorry story is that now we are left with Bumi Resources moving ahead with a US$1.3 billion ‘debt swop’, where the China Investment Corp will get a sizeable chunk of Bumi Resources shares, further stacking the house of cards that is Bumi Resources.  Aburizal Bakrie continues with his presidential bid which, even if he doesn’t win, will no doubt maintain the Bakrie family’s profile and hold on Indonesian political life.
In turn, Rothschild and Co, aka Bumi plc, aka Asia Resource Minerals (ARMS), are left with Berau Coal.  As cowboy companies go, even for Indonesian coal mining companies, this mine is out there in the ‘Wild East’, with reports of displacement of villages, environmental impacts and conflicts (see Bumi’s own 2012 annual report).
The court case against the previous CEO, Rosan Roeslani, for the missing US$173 million continues in Singapore.  (Rosan Roeslani seems to be impervious to all this with stories of hotels in the South of France and buying stakes in Italian football clubs still circulating.)
Meanwhile, Nick von Shindig continues to try to put a brave face on it all despite describing 2014 as ‘the toughest year so far’.
On top of all this, the reinvention of Bumi plc continues.  At the same time as yet another report on the threat to food, security and humankind from climate change is published by the IPCC, von Shindig is talking about boosting output by 10% and negotiating with Indonesia to increase the company’s coal export quota, as well as “cost reduction and asset optimization”.
Throughout all this, Nat Rothschild appears to like playing the shareholding righteous one with his calls for good governance, transparency and, most recently, pay cuts for Bumi/ARMS directors.
However, perhaps a flash of his real colours comes though in one of his pronouncements following the separation with the Bakries, where he says:
“I look forward to strengthening the board by adding a world-class independent non-executive director soon after the separation, and then it is over to Samin to ruthlessly cut costs in Indonesia.”
‘Ruthless cost-cutting’ of a London-listed company digging up coal in Indonesia to sell to China doesn’t sound too righteous to me.
One other thing to remember is the fact that Samin Tan has ended up with a 48% share of Asia Resource Minerals (ARMS), still listed on the LSE.  This, coupled with Tan’s PT Borneo Lumbung’s coal mining operations in Central Kalimantan (which we know to have its own problems), indicates that there is likely to still be trouble ahead for this company.
Our call at the 2013 AGM for Bumi to be shut down (see Financial Times article “Bumi deal to claw back US$173 of queried payments” [26.6.2013], may not be so unthinkable.  As a result of the ‘tough times’, Von Shindig is now talking about closing down Berau’s largest pit.
See video about UK financing of the Indonesian coal industry, featuring the Borneo Lumbung mine.