Cerrejon Coal: "the best mine in Colombia" 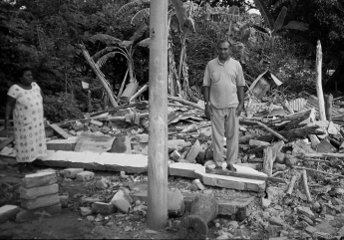 By Richard Solly, Colombia Solidarity Campaign member and Co-ordinator of London Mining Network
Today, 9 August 2014, is the 13th anniversary of the brutal eviction of the small village of Tabaco in La Guajira in the north of Colombia. This unarmed community of smallscale farmers of African descent was forced out by hundreds of armed police and security personnel so that the enormous opencast Cerrejon coal mine could expand.
That mine was at the time run by a subsidiary of US oil company Exxon, but three of the largest mining companies in the world, all now listed on the London Stock Exchange, had just bought up 50% of the mine when the attack happened, and now they own and control the whole operation. They are Anglo American, BHP Billiton and Glencore.
Yesterday, in London, friends from Colombia Solidarity Campaign, Friends of the Earth, Jaguar Despierta, London Mining Network, War on Want, WDM and others visited the offices of these three multinationals and made a lot of noise in solidarity with our friends in La Guajira who have held gatherings this week to decide how they can assert control over their own lands when faced with proposed ‘development’ projects like the Cerrejon mine. We also, with our friends in La Guajira, called to mind the sad and brutal eviction of Tabaco thirteen years ago today.
When Kirsty Wright from WDM and I visited La Guajira two months ago, we saw how communities being displaced by Cerrejon Coal continue to suffer as a result. They are demanding justice and respect from Cerrejon Coal and its multinational owners. You can help by taking part in an online action, sending emails to the Chief Executive Officers of the companies and to the Colombian embassy. The multinationals need to know that the people suffering because of their operations in Colombia have support from around the world; and the people in the communities are encouraged to know they are not alone.
But here’s a sobering thought: a colleague from a national NGO in Colombia who has worked with many mining-affected communities told us in June that Cerrejon Coal is actually “the best mine in Colombia”. He did not say this as a compliment to Cerrejon: he said, “Imagine what that tells you about all the others!” If forced removals, inadequate compensation, botched relocation arrangements, and destruction of livelihoods, communities and culture, count as the BEST in Colombia, what else is going on in that country whose government sees mining as the motor of economic progress?
Well, you can read about what UK-listed Glencore and private US company Drummond have done just to the south of Cerrejon in the recently published PAX report, The Dark Side of Coal. You can read Colombia Solidarity Campaign’s report about the impacts to date of UK-listed AngloGold Ashanti’s proposed La Colosa gold mine in Tolima (and they haven’t even built it yet!). And you can read ABColombia’s survey of mining impacts in Giving it away: the consequences of an unsustainable mining policy in Colombia. It’s clear: “the best” is appalling and all the rest are worse. So let’s keep up the pressure for change!