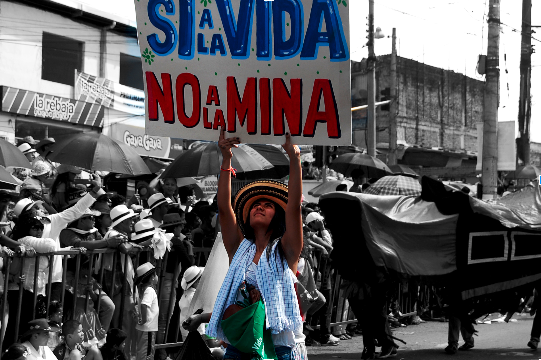 London-based human rights organisation Colombia Solidarity Campaign has published an Alternative Report about La Colosa, the AngloGold Ashanti gold mining project in Colombia’s municipality of Cajamarca (Tolima), entitled La Colosa: A Death Foretold.
The report unveils, for the first time, findings which clearly show that if the production phase of the La Colosa gold mine goes ahead, its implications to local communities would be much graver than previously anticipated. Community leaders and human rights defenders are already paying the highest price – their lives – for their opposition to the large-scale corporate mining project.
This report is a result of extensive research that included more than 100 interviews on the ground, legal document analysis, and technical assessment by Dr. Mark Muller, a highly respected international expert on mining.
AngloGold Ashanti is a company listed on the London Stock Exchange.
Alarming findings:

Opposition at risk:
“Anyone who opposes mining at the moment is a persecuted person” — Carmen Sofia Bonilla, former director of environmental authority of Tolima.
Numerous cases of harassment of people who oppose the mine have been documented.
Harassment continues with almost complete impunity due to the lack of political will of the Colombian state, as well as AngloGold Ashanti’s political and economic power in the country.
Following the assassination of campesino community leader César García, there is grave concern for the safety and security of other leaders in the region.
The right for affected communities to participate in the debate about the future of their region is being systematically undermined
A new “exclusion” of the Central Forest Reserve where La Colosa is located was silently granted to AGA in May 2013. Local communities only found out about it two months later.
More than half of the current members of Cajamarca Council have had direct or indirect financial links with the mining company, which constitute conflicts of interest.
People who peacefully oppose the mining project have been characterised as “fundamentalists”, people who are “against development”, or even “terrorists”.
Worsening quality of life and precarious working conditions:
Despite promises of a better life, the residents of Cajamarca have been adversely affected by higher costs of living, a marked increase in prostitution and violence, and change in the use and ownership of land.
There are reports of a tense working atmosphere in the mining project, marked by fear of losing one’s job.
Download the report here
For more information here.