Community rises against Antofagasta in Chile 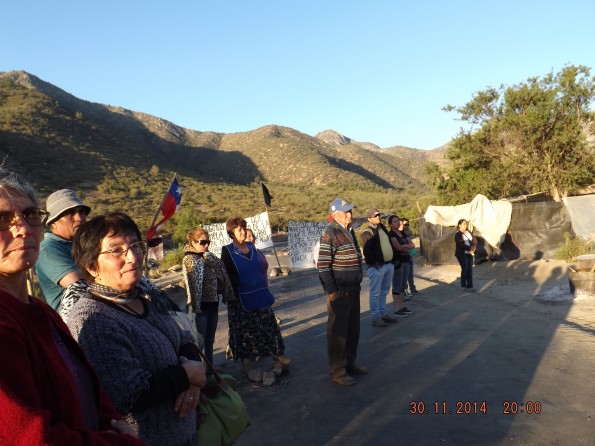 On October 23rd the Supreme Court of Chile ordered Minera Los Pelambres (MLP), a subsidiary of the group Antofagasta Minerals, to restore the free flow of water in the Pupio basin. This historic ruling is a recognition by the highest legal powers in Chile that the course of water in Pupio river has been damaged by MLP’s construction of a tailings dam. The Supreme Court has ordered the multinational to return the river to its natural course. They should also clean the contamination caused by the tailings dam.
The victory follows a long legal battle fought by the residents of Caimanes and their lawyers. Caimanes is a community in the Los Vilos reigion, 150 miles north of Santiago and 5 miles away from the tailings dam. The community has opposed the project since its beginnings over a decade ago. They feared for their security and access to water. At the time of construction, the company’s manager Francisco Velozo publicly admitted that constructing the dam far from populated areas was imperative. Despite this, the tailings dam was constructed near Caimanes as the cheap option, despite the long term destruction this would mean for nearby communities. It is the biggest tailings-dam in Latin America, and the third biggest in the world. MLP is a rapidly expanding part of the Antofagasta Minerals multinational. The Los Pelambres mine currently produces over 55% of Antofagasta Minerals’ production.
In 2006, the Chilean Court of Appeals rejected permission to construct the tailings dam, reasoning that it would affect the residents’ right to water. However the matter was settled by the company by paying a handful of community residents, in exchange for silence on the matter. The tailings dam began functioning in 2008, despite the clear life-threatening risks for the community and an unpopular process of social division between residents.
The residents of Caimanes have long stated that this work has brought with it serious environmental problems. It has also brought social problems to the community. It has forced those in the area to live at risk of being crushed by a potential collapse in the event of an earthquake. The company consistently conducted themselves through shady means, pressuring and buying complicity in order to attain an image of consent which did not respond to reality. Agriculture in the valley has completely disappeared, water consumption is restricted due to loss of the original water supply. Residents are now totally dependent on deliveries of water, which has destroyed the local economy.
MLP has been brought to trial various times for breaking Chilean law and for threatening life: it was found guilty of damage to archeological patrimony, and for risk to the inhabitants due to a work that does not comply with security regulations. The company has now been ordered to re-establish the flow of water in the valley, which should also be free from contamination. Despite various rulings by Chilean courts, the company continues to entirely ignore any responsibility for the destruction they have caused.
Despite the recent victory MLP continues to deny their role in causing the loss of water flow in the Pupio valley. They show no desire to comply with the order. Finally recognized by the Chilean state, but still invisible to the company, the residents of Caimanes decided to occupy the access route to the tailings-dam. The community have set up camp indefinitely. They have so far stayed over 45 days. With dignity and organization the road is blocked day and night. They state they do not intend to move until the company complies with the court order.
After 40 days of occupation the community decided to take over a tunnel that was the only remaining access to the tailings-dam. They have since been evicted by the police, who showed a letter from MLP requesting the removal of the occupation, without any official warrant.
Antofagasta Minerals, whose offices are located in London, are making a profit at the cost of irreparable environmental damage in the Pupio valley. The livelihoods of local farmers have been destroyed, to the sole benefit of a tiny economic elite. The multinational claims to respect national laws, favour local development, care for the environmental and have positive community relations. In their occupation the community have exposed their lies and environmental crimes. After an arduous battle fought through national laws, the Caimanes community are seeking to make MLP, and Antofagasta Minerals, comply with the Courts. There is still no water at Caimanes, and the occupation continues. 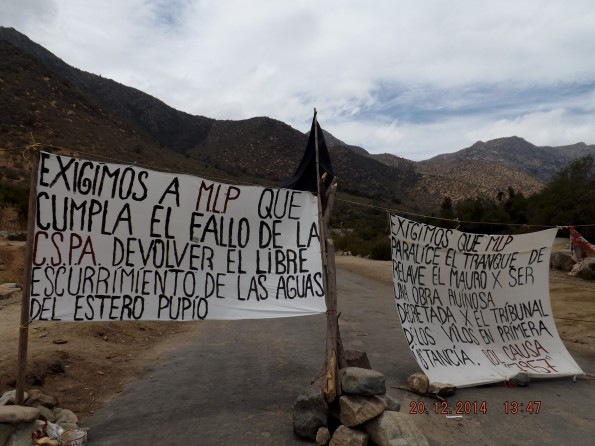