By Yula Burin
Marikana Solidarity Collective marked South Africa’s Women’s Day on 9 August 2018 with a film night and panel discussion, celebrating the history of women’s resistance in South Africa, the week before the anniversary of the Marikana Massacre on 16 August.
The Women’s March to the Union Buildings in Pretoria, South Africa on 9 August 1956 marked the culmination of more than three decades of sustained organising by South African women across all racial groups to protest passes being imposed on black women. African women were angry at the prospect of having their freedom of movement severely restricted and were willing to risk being arrested, detained and imprisoned, banned and killed in their fight to retain their autonomy and independence. 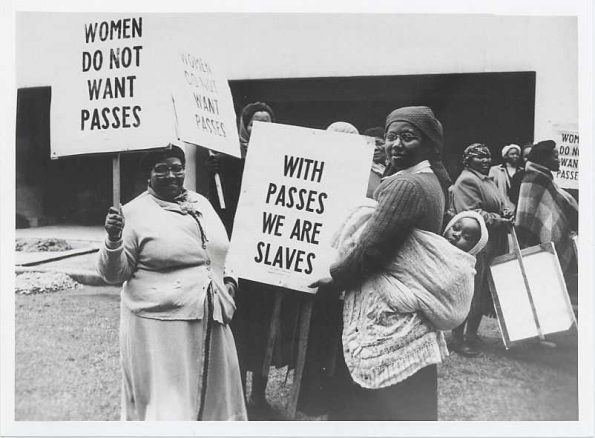 The pass was any document that effectively restricted where an African could go in their own country, and which had to be shown on demand by police and local officials. Black people considered residents’ permits (also known as lodgers’ permits), special entry permits, permits to seek work, and reference books as variations of the pass.
Prior to the arrival of the European colonists, African women were property owners and possessed legal rights. Their land and rights were taken from them subsequent to the establishment of a white settler colonial government in 1901 that created a society for the benefit of European settlers, and where blacks were at the bottom of the social hierarchy. However, in this new re-organisation of societal structures, black women found themselves subordinated both to African men and to white colonial rule.
The appropriation of the most fertile land for the whites and removal and sequestering of blacks to the more arid and infertile reserves meant that rural poverty forced black men to move to work on white-owned farms and as domestic workers and miners in towns and cities. African families were broken up because of this and women were responsible for all aspects of raising families as well as farming responsibilities. Over time, however, poverty forced women to move to towns and cities too, to join their husbands and to find work that would enable them to send money to their families back in the countryside.
The increasing numbers of black women in urban areas was considered problematic by the white authorities who were intent on controlling and restricting their movements. As a justification for this control, the white authorities characterised black women as undisciplined, deeming them the embodiment of immorality threatening the ordered fabric of society:
‘The great majority of the native female population appear to earn their livelihood by prostitution and illicit liquor… the majority are not only a menace to health but a burden to the community by reason of their filthy, lazy, drunken and immoral habits’, a Johannesburg sanitary inspector, 1928 (Friedman, 2006).
In 1913, by seeking to protect the interests of white workers from black competition in the labour market, the Orange Free State faced the ire of women of all racial groups when it tried to make black women carry passes. This was the first instance of women’s multiracial organised protest on the issue of passes for black women, although a large number of the women were supporters of what eventually became the African National Congress (ANC), i.e. the South African Native National Congress. This protest took the form of passive resistance, whereby black women refused to carry the new passes. The white authorities relented for a time due to the outbreak of the First World War but sought to re-instate the imposition at its end. Charlotte Maxeke, the first president of the Bantu Women’s League (later the ANC Women’s League in 1948), co-ordinated this second tranche of passive resistance during 1918 and into 1919. This resulted in the South African government agreeing that it was not compulsory for all black women to carry passes. However, the government still managed to pass legislation, the Native (Black) Urban Areas Act No 21 of 1923, which stated that only black women working as domestics were allowed in towns and cities. 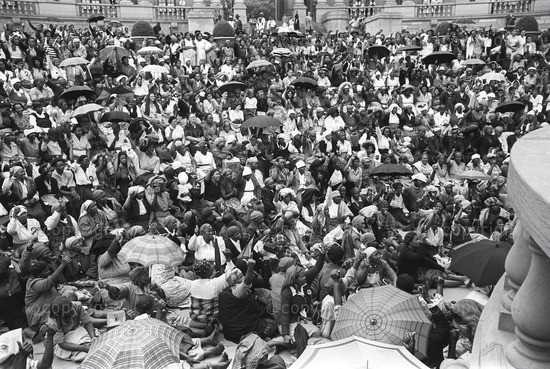 In 1930, local municipal attempts in Potchefstroom to regulate women’s movement by making them pay a monthly fee for a lodger’s permit led to further resistance. Josie Palmer, a young coloured woman who was active in the South African Communist Party, headed the town women’s campaign against what the municipal authorities were demanding. The government repealed the legislation because, ultimately, they feared strike action and the political organising of a community facing severe poverty and institutional neglect.
Not long after the passing of three significant pieces of legislation that undergirded the South African apartheid system – the Group Areas Act (1950); the Native Laws Amendment Act (1952); and the Natives (Abolition of Passes and Co-ordination of Documents) Act (1952)  which stipulated that all black people over the age of sixteen had to carry documentation – the South African government announced that black women would have to carry passes. Women decided to resist and fight this, one example being the Defiance Campaign jointly carried out by the ANC and the South African Indian Congress.
The Federation of South African Women (FEDSAW) was launched in 1954 with the stated aim of representing the social, legal and economic interests of more than 230,000 women of all ethnicities across South Africa. A Women’s Charter was drawn up at its first conference. However, in 1955, in response to the apartheid government’s announcement that as of January 1956 black women would be required to carry passes, FEDSAW and the ANC Women’s League initiated a joint anti-pass campaign that culminated in the Women’s March of 9th August 1956. 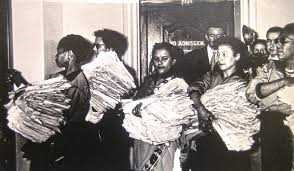 Walking in groups of twos and threes to the Union Buildings – the seat of the apartheid government – in Pretoria, women of all races gathered in readiness for their 14,000 petitions to be handed to the Prime Minister J. G. Strijdom. Strijdom contrived to be elsewhere and the petitions were received by his secretary. The march was led by Lilian Ngoyi, Helen Joseph, Albertina Sisulu and Sophia Williams-De Bruyn.
Observing thirty minutes’ silence, the 20,000 women in the amphitheatre of the Union Buildings started singing ‘Nkosi Sikelel’ iAfrika’ before launching into a song written especially for the occasion of the women’s march:
“Wathint’ abafazi, Strijdom!”
wathint’ abafazi,
wathint’ imbokodo, uza kufa!
[When] you strike the women, you strike a rock,
you will be crushed [you will die]!
The petition that was presented to Strijdom’s proxy reads as follows:
“We, the women of South Africa, have come here today. We African women know too well the effect this law upon our homes, our children. We, who are not African women, know how our sisters suffer. For to us, an insult to African women is an insult to all women.
* That homes will be broken up when women are arrested under pass laws.
* That women and young girls will be exposed to humiliation and degradation at the hands of pass-searching policemen.
* That women will lose their right to move freely from one place to another.
We, voters and voteless, call upon your government not to issue passes to African women.
We shall not resist until we have won for our children their fundamental rights of freedom, justice and security.”
— Presented to Prime Minister J.G. Strijdom, 9 August 1956.
The Pass Laws were finally repealed in 1986.
References
Boddy-Evans, Alistair. 16th July 2016. Women’s Anti-Pass Law Campaigns in South Africa. https://www.thoughtco.com/womens-anti-pass-law-campaigns-apartheid-43428. Accessed Tuesday 24th July 2018.
Friedman, Michelle (2006) Our Triumphs and Our Tears: Women’s Struggles in 20th Century South Africa. https://www.apartheidmuseum.org/our-triumphs-and-our-tears. Accessed Tuesday 24th July 2018.
South African History Archive. www.saha.org.za/women/national_womens_day.htm. Accessed Monday 23rd July 2018.
South African History Online. https://www.sahistory.org.za/article/history-womens-struggle-south-africa#contents-1. Accessed Monday 23rd July 2018.
Southgate, Mandy (9 Aug 2011) This Day in History: 9 August 1956. passiontounderstand.blogspot.com/2011/08/this-day-in-history-9-august-1956.html. Accessed Tuesday 31st July 2018.
Wardle, Lynnda (11 Sept 2016) Celebrating South Africa’s National Women’s Day. dangerouswomenproject.org/2016/09/11/south-african-national-womens-day/. Accessed Tuesday 31st July 2018.
Wikipedia (n.d.) Women’s March (South Africa). https://en.wikipedia.org/wiki/women%27s_March_(South_Africa). Accessed Sunday 29th July 2018.