Letter of solidarity from Chile to Marikana

On 16 August, around 60 people participated in Marikana Solidarity Collective’s (Marikana Miners Solidarity Campaign, Pan-Afrikan Society Community Forum, Decolonising Environmentalism and London Mining Network) vigil of the sixth anniversary of the Marikana Massacre in South Africa.
Gathering outside South Africa’s High Commission in London’s Trafalgar Square, protesters laid flowers, sang, held placards, made speeches and stood in remembrance of the 34 striking miners shot dead on that day in 2012 and others killed in the weeks around the massacre by South African police. 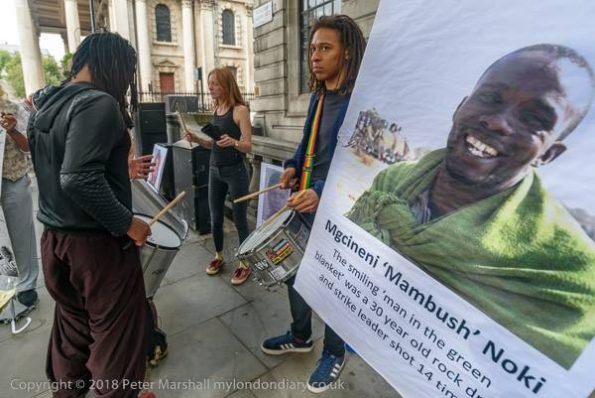 The London-listed mining company Lonmin and the South African government are still to be held to account for their roles in the killings and injuries of workers who were demanding their rights at the platinum mine.
As Lonmin prepares to absolve its responsibility by selling to South African mining company Sibyane-Stillwater, Marikana residents continue to fight for justice: for the release of mine workers wrongly imprisoned, for reparations and apologies by the perpetrators to the widows and the injured, and for better working and living conditions so that the community can begin to heal.
Below, Vice President of Copper Workers Confederation Miguel Santana Hidalgo writes to those at London’s solidarity vigil and calls for mining companies to recognize their responsibility, starting with those linked to the UK. 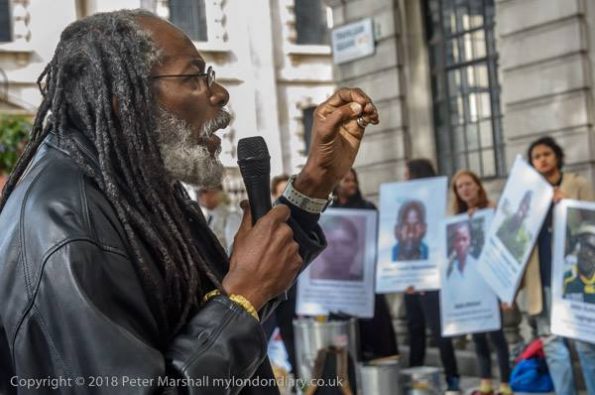 Dear Comrades,
Please receive a fraternal and affectionate greeting and embrace from this Latin American corner called Chile.
We greet you who are attending the commemorative ceremony of the Marikana massacre, recalling the names of those killed and your demand that there should not any degree of impunity for those responsible.
From the British company Lonmin to the police officers who fired the shots, everyone has responsibility for the deaths.
Unfortunately, this type of practice continues to be allowed and supported from London. The large transnational capitals do not recognize the ethical values of the societies where they were born and, therefore, have always been allowed to buy government agents to give them access to exploiting raw materials, under bad working conditions and leaving only pollution for our countries. 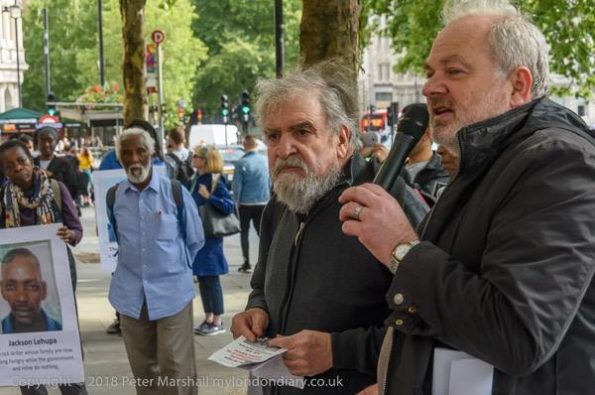 Here in Chile, Anglo American, the same company that in the context of the South African strike of 2012 fired 12,000 strikers only to rehire them for just 177 euros (South African agency Sapa), has been characterized by the precarious condition of their outsourced workers. In fact, we managed to negotiate common basic conditions of food, transport, security implements, among others, only in 2014; but since then the anti-union practices of the company have not ceased. There is more, the company purchases trade union of leaders, shows contempt for workers who are organized, and they are now persecuting the more effective union of newly constituted contract workers at their Los Bronces site in Santiago de Chile.
Thus, as long as fomenting from London of this action by the companies is allowed to continue, we will continue lamenting that events like those that happened in Marikana continue repeating through history. To avoid this, the mining companies must begin by recognizing their responsibility and act accordingly to reach the truth and the necessary reparations, which are not only economic but spiritual as well.
A fraternal embrace from Chile and we will continue to find ourselves in this path of struggle.
Miguel Santana Hidalgo, Vicepresident of Copper Workers Confederation
CONFEDERACIÓN DE TRABAJADORES DEL COBRE
R.S.U. 06-01-0470
Almirante Latorre #149 Santiago de Chile.
Fono: +56 2 26996931 vicepresidencia@confecobre.cl