Lonmin in the dock: the People’s Tribunal

What: Join us outside mining company Lonmin’s extraordinary general meeting (EGM) for a People’s Tribunal.

ACCESSIBILITY: We will be performing this tribunal outside the EGM venue, which is flat. The nearest accessible toilet is in Pret, a five minute walk away. We will be filming the event and using cameras, flash photography is unlikely. We’ll be using a sound system. There will be some chairs available but let us know if you would like one to make sure we have enough, and if you have other requirements: contact@londonminingnetwork.org 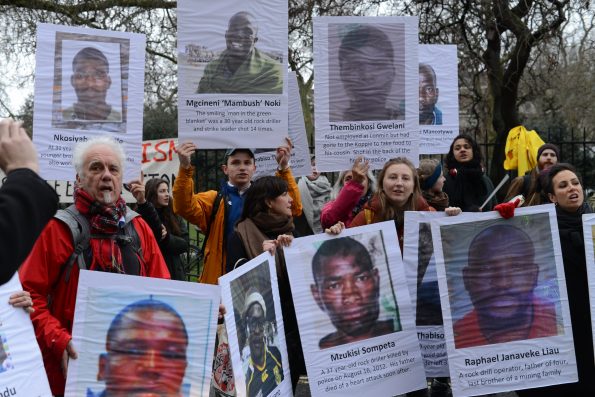 Lonmin is a British-South African platinum mining corporation and is listed on the London Stock Exchange. It is complicit in the massacre of 34 striking mine workers in Marikana, South Africa, in 2012, when South African police opened fire on the unarmed protesters, at the orders of the ANC government, in collusion with the company.

The community have been campaigning for justice for the last seven years, yet have not found it. Lonmin is to be taken over by South African mining company Sibyane Stillwater in the summer – after which it will be even harder to attain justice. Sibyane Stillwater are also planning to cut some 30,000 jobs. This will devastate families who rely on the income from mining for survival.

After seven years of inaction, we are not going to protest this shareholders’ meeting as usual or enter into the unequal power dynamics that make up the meeting space. Instead, we will hold a people’s tribunal outside that puts Lonmin on trial and delivers its verdict.

Lonmin has had its chance to account for the massacre, and for its evasion of responsibility since. In an hour-long tribunal, we will delve into the historical colonialism and racism that made the massacre possible, the collusion surrounding the unlawful killings, and what has happened – or not happened – since. We will read testimonies of Marikana community members and hold silence for those who were killed.

Watch this short video from 2018’s Lonmin AGM and protest for more on Marikana’s stuggle for justice.

*Do get in touch if you are an actor, writer, journalist, or would like to get involved!*