Monday 16 September will see the launch of ‘A Just Transition is a Post-extractive Transition’, a joint report by climate justice organisations War on Want and London Mining Network, ahead of 20 September’s Global Climate Strike. The report exposes the mining industry’s greenwashing tactics, and makes the case for a transition to renewable energy rooted in social justice.

Drawing on new, little-reported data, the report examines how the mining industry is destroying critical ecosystems globally, contributing to over a quarter of global carbon emissions (UNEP), and displacing communities already vulnerable to climate shocks in the process.

Mining companies including Anglo American and BHP have positioned themselves as key to solving the climate crisis by claiming that they will deliver the minerals and metals needed for the growing demand for renewable energy, justifying the expansion of metal mining into climate-critical environments such as the deep sea. However, much of the cited metal demand is not closely tied to renewable technologies. 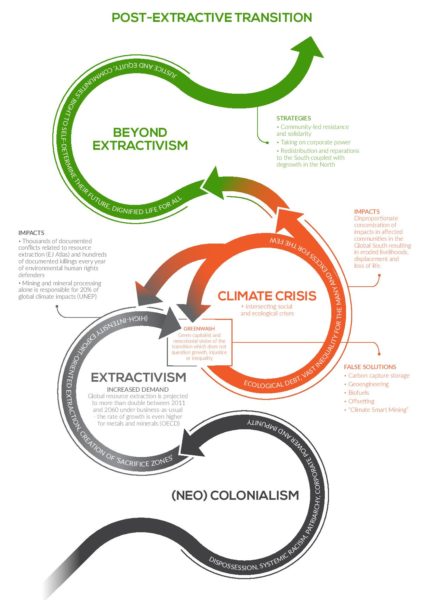 Furthermore, the report argues this projected demand is based on unachievable and unjust projections, and that solutions to the climate crisis must instead be rooted in social justice.

Researcher and report author Benjamin Hitchcock said: “Mining corporations are aggressively and cynically marketing their destructive activity as a solution to the climate emergency. It’s critical that we stop extractive industries from greenwashing their crimes and capturing the narrative around the transition to renewable technologies. The climate movement must listen to and learn from frontline communities pushing back the expansion of the extractive economy: communities who are simultaneously advancing solutions that embody social, ecological and climate justice.”

The report shows that:

War on Want and LMN have collaborated with the global Yes to Life, No to Mining solidarity network to release five case studies in conjunction with the report. These case studies demonstrate the deadly impacts of extractivism on communities from Colombia to Finland, and examine community-developed alternatives to mining.

Mariana Gomez Soto, Yes to Life, No to Mining Regional Coordinator for Latin America, said: “We cannot and should not base our development pathways on the expansion of the extractive industries. People in Colombia more widely are calling for a new development model that includes alternatives which are rooted in and serve the well-being of the planet and the people.”