Four environmental human rights defenders are travelling from Latin America to the UK for Unmasking BHP – a week of arts, protest and discussion to mobilize around the London-listed mining company’s annual shareholders’ meeting.

Join us between 14-22 October as we challenge the largest mining company in the world, BHP, over its neo-colonial practices of extracting metals and fossil fuels in the Global South while pocketing the profits, devastating the lives and the land of those affected. 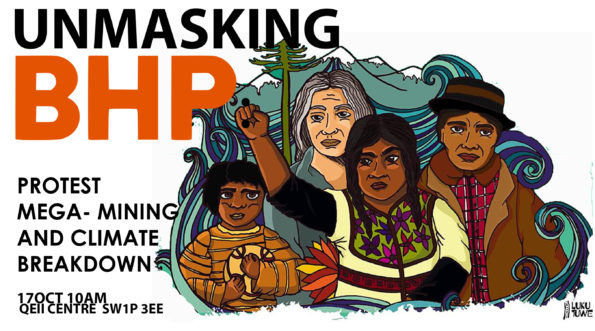 The defenders are from three of the 13 countries that the London-listed multinational operates in. They are travelling to London, the hub of global finance and where many of the world’s largest mining companies’ stocks are traded, to share their struggles against the company’s mega-mining projects. Read Introducing the Defenders.

They will voice their demands of BHP in the aftermath of 2015’s Samarco dam disaster in Brazil, the forced displacement of communities surrounding the Cerrejón coal mine in Colombia, and the huge Escondida mine in Antofagasta, Chile which extracts vast amounts of water from nearby salt flats causing drought. These communities, like much of the Global South, are already experiencing climate breakdown.

Now that the climate crisis is grabbing headlines in the Global North, BHP is using the opportunity to greenwash its carbon emissions (the mining industry is responsible for over a quarter of global emissions). It is promoting itself as being part of the solution, rather than the problem. Cashing in on an ever more lucrative electric vehicle market, BHP is increasing its extraction of ‘green’ metals such as copper for cars, wind turbines and solar panels, and lithium for batteries.

The week before the week of action, decision makers will gather in Geneva to discuss a Binding Treaty that aims to reduce some of the power of mining and other companies, by creating a mechanism so that affected states and peoples can sue transnational corporations. For communities affected by BHP, whose repeated demands have been ignored, this binding treaty could be an important tool in dismantling corporate power.