Open letter to BHP on anniversary of Samarco dam collapse

At 1.15pm today, representatives from London Mining Network, War on Want and Global Justice Now tried to hand in a letter at BHP’s London office, addressed to the company’s chair Ken MacKenzie, on the fourth anniversary of Brazil’s Samarco tailings dam collapse. 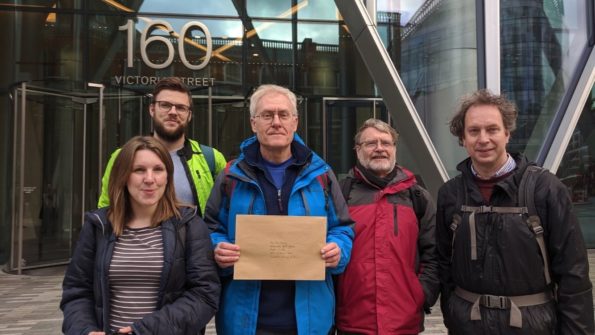 No-one from BHP wanted to come down from their 12th floor office to collect the letter (below the video) from the group, so we were told to take it to the building’s postal room instead, where a worker called up to BHP to tell them a letter was waiting.

We look forward to hearing the London-listed company’s response, and hope that they might answer these questions at their AGM to be held in Australia on 7 November. We are also sending these letter to Brazilian mining company Vale, who jointly own Samarco with BHP.

in the video below, LMN researcher Paul Robson explains why we wrote a letter and the reparations affected communities are demanding, and have been waiting for, for four years.

The collapse of the Fundão Dam in Brazil on 5th November 2015 led to about 50 million cubic metres of mining tailings entering the Rio Doce, affecting the lives of communities along the river. London Mining Network has been following the impact of this event on the lives of communities, and the activities of the mining companies and RENOVA [the company which Samarco commissioned after the collapse to manage reparations] in compensating affected communities and in restoring the environment and livelihoods.

On the 4th anniversary of that tragedy, there are a number of questions that we would like to ask on behalf of affected people along the Rio Doce and people at risk from similar tailings dams disasters.

1. Communities along the Rio Doce affected by the collapse of the Fundão Dam have the right to Assessoria Técnica funded by RENOVA (Technical Assistance for obtaining compensation and planning their future). To date, only in Mariana and Barra Longa has this Assessoria Técnica been provided. We understand that a legal judgement was made in August 2018 that all communities should receive this assistance and another in September 2019 that this should be provided promptly, but that recent meetings with RENOVA have come to no conclusion as to when Assessoria Técnica will be provided.

Can you explain why there is a delay in implementing this commitment?

Can you say when all affected communities along the Rio Doce will have Assessoria Técnica? You were asked about this at the 2019 Annual General Meeting but there was no response.

Will you ensure that communities have access to full risk assessment reports and evacuation plans in local languages and ensure that communities surrounding the project sites are recognised as key stakeholders and as such enabled to be fully represented and participate in the negotiations and planning processes that have a direct impact on their health, livelihoods, spiritual well being and the environment?

2. In previous years London Mining Network has asked questions at your Annual General Meeting about the need for independent, high quality, studies about the potential contamination of water, sediment, soil and biota along the Rio Doce (and the subsequent impacts on health because of this and because of air pollution). It is necessary to understand the risks created by the movement of very large quantities of mining waste through a river basin with high background concentrations of contaminants after the collapse of the Fundão Dam. Mitigation of the damage requires a full understanding of the extent of the contamination of the river and coastal areas. We are encouraged that some such studies have begun in the last year and that this is reported in your 2019 Sustainability Report, but we are concerned that these studies only began three years after the collapse of the Fundão Dam.

The Sustainability Report states (last paragraph of page 20) that “Research institutions have been progressing with studies along the river and coast required by regulators and prosecutors, with preliminary results scheduled for late 2019”.

Can you confirm that this refers to Programa de Monitoramento da Biodiversidade Aquática of the Rede Rio Doce Mar, which is studying only the coastal areas and sections of the Rio Doce in the State of Espirito Santo?

Can you confirm that the corresponding programme in Minas Gerais State is a group of six studies announced by FAPEMIG and the RENOVA Foundation announced in Belo Horizonte on 14th June 2019, which are only just getting underway (four years after the collapse of the Fundão Dam)?

Can you assure us that these studies will continue until there is a clear understanding of contamination of water, sediment, soil and biota along the Rio Doce following the collapse of the Fundão Dam in November 2015?

Can you assure us that the results of these studies will be published widely, given the global interest in understanding the risks and costs of the collapse of a mining tailings dam?

3. RENOVA is implementing 42 programmes of compensation and recovery. The Executive Summary of the March 2019 report by RAMBOLL monitoring RENOVA’s activities begins: “Ramboll’s monitoring of the 42 programs implemented by the RENOVA Foundation found that most of the programs still have their scope under evaluation by the Technical Committees (TCs) and are still undefined. Only 12 of the programs have the scopes defined and approved by the Interfederative Committee (CIF). In addition, it was found that many planned activities have been postponed, leading to delays in the development and implementation of various programmes.”

The Executive Summary of the June 2019 report by RAMBOLL monitoring RENOVA’s activities notes in the section of Recommendations: “Evaluating the programmes of the RENOVA Foundation, it appears that generally they are not properly structured or linked to each other which, within in a planning framework, is an important barrier to adaptation to realities of the ground. They still follow an emergency programme logic.”

These reservations by the entity tasked with independently monitoring RENOVA’s activities are not reflected in your Sustainability Report for 2019. The Sustainability Report mentions positively a small selection of activities without noting their role and importance in the overall programme framework and whether the overall objectives are likely to be achieved; it does not give the source for its assertions about progress and it does not refer to independent monitoring and studies.

Can you give us your assurance that BHP’s future reporting will be structured around actual progress in RENOVA’s programmes and based on independent monitoring and studies?

Can you ensure that when you report on a new finding (for example the difficulty of removing sediment from river-bank areas) you also report on the implications of this (the likelihood that river-bank areas will never revert to agriculture or pasture)?

4. The two major tailings dams collapses in Brazil in the last four years have been of upstream dams. Recent expert opinion on upstream tailings dams has noted that they are not inherently dangerous provided that favourable site conditions are available and rules for the proper design, construction and operation procedures are followed. However, the inherent fragility of these structures increases the risk, and requires a significantly greater input in terms of design and construction as well as a major management commitment to quality control and inspection and monitoring during the operation. This process should be augmented by regular auditing by a truly independent inspecting engineer. In Minas Gerais inspections have been effectively self-auditing to date and the regulator is recognised as having inadequate resources to provide proper oversight of the new regulations given the large stock of at-risk tailings dams in Minas Gerais.” (Cambridge and Shaw, “Preliminary reflections on the failure of the Brumadinho tailings dam in January 2019.” Dams and Reservoirs, Volume 29, Issue 3.)

Can you assure us that BHP (being a leading player in ICMM) will ensure that the up-coming ICMM report on tailings dam management will include recommendations to the industry that will reduce the risk from the existing stock of tailings dams in contexts where independent auditing and strong regulation are lacking?

Can you assure us that BHP will require its Non-operated Joint Ventures to adopt appropriate governance and risk management standards with respect to stability of tailings dams (and not simply encourage them to do so as is implied by the statement on page 17 of the Sustainability Report)?

We look forward to receiving answers to these questions in the near future.