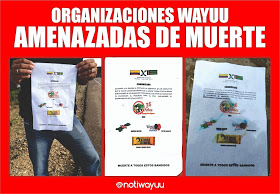 New death threats have been issued against LMN’s friends in indigenous Colombian organisation Fuerza de Mujeres Wayuu (Wayuu Women’s Force). Fuerza de Mujeres Wayuu has been heavily involved in the struggle for justice in the face of the environmental damage and social dislocation cased by the Cerrejon coal mine, owned by London-listed companies Anglo American, BHP and Glencore.

When these threats are made, Cerrejon Coal often responds by denouncing the threats; but it is only because of the company’s presence that the threats are made in the first place – those threatened are threatened because they criticise the mining company. Unless Cerrejon Coal and its multinational owners actually prioritise the rights and views of the local communities whose lives they have disrupted (and in numerous cases, whose settlements they have destroyed) these threats will continue to be made, in order to intimidate those whom the paramilitaries and the Colombian govermment regard as obstacles to progress.

We offer our solidarity to our friends in Fuerza de Mujeres Wayuu and we demand that Cerrejon Coal’s London-listed owners ensure that the company accept the demands of those who are badly affected by its operations; that the Colombian state protect its citizens against paramilitaries; and that the UK government stop giving diplomatic support to UK-based companies associated with human rights abuses and environmental destruction overseas.

In January 2020, LMN co-signed a letter to the President of Colombia calling for immediate and thorough investigation of all the threats against community leaders in La Guajira. The fact that the threats continue is proof of the Colombian Government’s failure to act. See letter security leaders LG – Jan 2020 – names redacted