Rio Tinto’s annual general meeting (AGM) on Wednesday 8th April wasn’t your typical three hour sit-down in a room of slightly bored, mostly white middle-aged investors, followed by posh triangle sandwiches and crisps. Nor was there a small but lively crowd of protesters outside the venue, demanding that the company be held to account for its neo-colonial violations of human rights.

This year, we held an online week of action, and, like many other mining and banking industry AGMs this season, Rio Tinto’s investors’ meeting was held behind closed doors, in an undisclosed location, with a minimum quoram of shareholders in attendence. We don’t know which ones or how many. 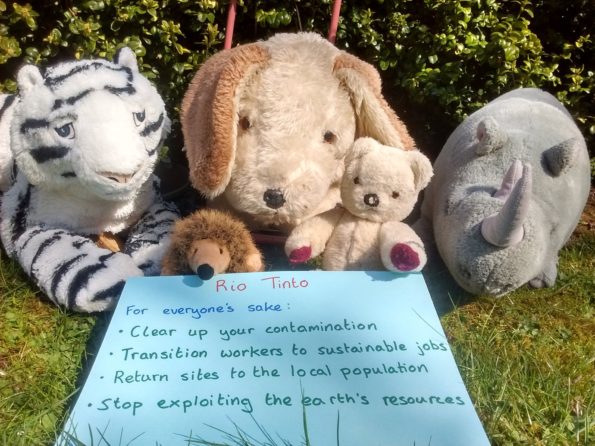 Afterwards the company hosted a 90 minute investor engagement conference call. We’re not sure who was on the call or how many.

The imbalance of power was more subtle than a physical AGM, but its format of allowing shareholders to submit questions in advance or wait in a queue to ask them during the call, gave the company the time to prepare their answers and the control over who to ask to speak. Two representatives of the groups we were working with, including Eryck Herinarahinjaka from Publish What You Pay Madagascar who would have been with us in London, had their questions read out rather than being invited to ask them live, and two groups working on Mongolia were unable to join the queue.

Covid-19 restrictions allowed the London-listed company to skimp on transparency and accountability, somewhat. We livetweeted from the conference call and, more importantly, we factchecked some of the answers that Rio Tinto gave. What the company says is often markedly different from the experience of communities on the ground, or from the findings of independent studies.

Chair Simon Thompson spoke of Rio Tinto’s resilience in dealing with Covid-19 and said that safety was its priority, before saying:  ‘Where it is safe to do so, we have tried to keep our operations open and running smoothly, in order to safeguard the jobs of our employees and our suppliers. And to maintain our contribution to the communities and regions where we operate’. We’re not sure that mining-affected communities would agree with this statement, despite the company’s pledge of $25 million investment in Covid-19 related community projects, taking its total voluntary community investments to almost $60 million in 2020.

@Riotinto‘s chairman opened today’s AGM by stating that health and safety is the company’s top priority. Tell that to the communities in Bougainville living with the deadly legacy created by the company’s mine waste. #RioTintoAGM20 pic.twitter.com/uPDhuy3ZXh

Everyone knows that one of the best ways to limit the spread of the virus is handwashing, but many people living around Rio Tinto’s former and current mining operations such as in Bougainville, Mongolia and West Papua, cannot access clean drinking water, due to contamination and water being redeployed to extract metals and minerals.

In comparison to its community pledges, CEO J-S Jacques announced ‘fantastic results’, with $11.9 billion of cash returns to shareholders; $10.3 billion in dividends and $1.6 billion in share buybacks. Shareholders will receive a further $3.7 billion in the first half of this year. 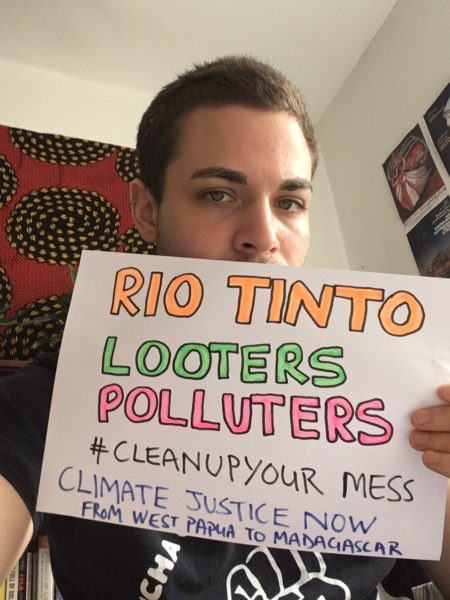 The company proudly spoke about its carbon emissions reduction pledge, with a 15 percent reduction in absolute emissions by 2030 and its aim to reach net zero by 2050, while neglecting to mention the grave human and environmental impact of mining for so-called green metals, to cutting and running from mining operations, leaving toxic waste in its wake and wrecking whole ecosystems, which LMN highlighted in our recent report.

Answering a question from a shareholder about the prospects for success of Rio Tinto’s aluminium operations, chair Simon Thompson spoke of ‘community relations challenges’ at its mine in Richards Bay, South Africa. ‘There has been some community unrest relating to the chieftaincy of one of the four host communities. It turned violent. Rio Tinto had to curtail operations in November 2019 following three shooting incidents, but then resumed in December 2019, prior to the imposition of Covid 19 restrictions. The company is working with the authorities to restore calm and they are making good progress’. Thompson didn’t mention of the welfare of local people, or the reasons for the unrest.

Yvonne Orengo from Andrew Lees Trust was able to ask a question on the company’s Rio Tinto QMM ilmenite mine in Madagascar though, leading to the only point in the 90 minutes where the Chair Simon Thompson and CEO J-S Jacques appeared rattled. 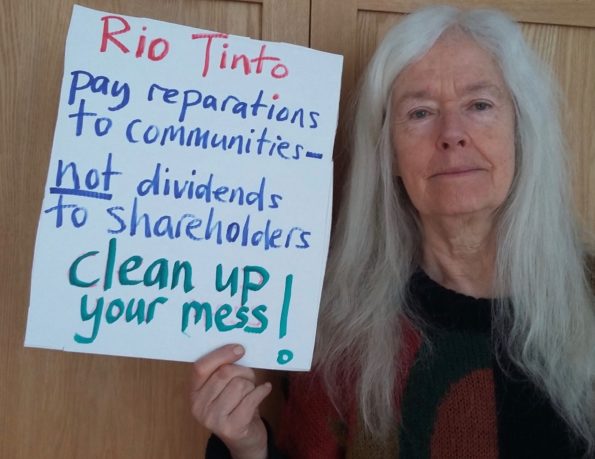 ‘15,000 people continue to draw drinking water from natural water sources around the [QMM] mine which are contaminated by uranium and lead discharged by the mine. You said last year and again just now that the mining process only uses water, but you have conceded in writing that the extraction process concentrates radio-nuclides and heavy metals, and this is related to the mining operation and is well in excess of WHO guidelines. Despite claims that your processes are monitored, you have not provided us or other Civil Society Organisations with evidence about how your water treatment removes contaminants before it is discharged.

‘The burden of proof rests with Rio Tinto. Meanwhile local people are drinking water from these contaminated sources and the company refuses to provide safe drinking water to local communities; it must do so under the polluter pays principle. You did not answer this question from Eryck (left). Will you please provide drinking water to the com

munity in Anosy and not put the burden of cleaning up water on the cash-strapped Malagasy government?’

Jacques replied by saying: ‘We are not using chemicals in the process at all. We monitor the quality of water before it is discharged and the monitoring shows us that the water is fine when it is discharged’. ‘The geology of the ground in the area means uranium occurs naturally. Baseline studies are clear and we will share information as we have promised. There have been delays in the study because of Covid 19 and the laboratory doing the study is currently closed but hopes this will change very quickly.’

Rio Tinto not paying attention to latest water studies which demonstrate the QMM mine in Madagascar is discharging contaminated waste-waters into local lakes and rivers where villagers gather their drinking water. https://t.co/DrXyz2oJLT #RioTintoAGM20 #ReallyRioTinto?

Keren Adams was in the queue to ask about Rio Tinto’s responsibility for its Panguna copper-gold mine in Bougainville, which it operated from 1974-1989, but her question was read out, meaning that Keren was unable to dispute the answer. The mine sparked a civil war and the company abandoned it in 1989. Toxic mining waste remains, with devastating health, social and environmental impacts for local people.

Jacques said that its local subsidairy BCL was fully compliant with the laws at the time. ‘We don’t believe BCL walked away – it had to flee because of conflict and to protect revenue. No Rio Tinto personell has visited the area in 26 years. Rio Tinto gave its shares of Panguna mine to the autonomous Bougainville government and the government of Papua New Guinea in 2014. ‘Talks to implement an independent environmental study broke down because of differences between the company and the government’, said Jacques.

I like the way in the #RioTintoAGM20 call that an answer on #Bougainville talks about the civil war starting as if it was something separate from the mine .. whereas the grievances around the mine were the cause #ReallyRioTinto?

A written question by Roger Featherstone, Arizona Mining Reform Coalition, who was also planning to travel to London, was read out. He asked if Rio Tinto if it would stop its proposed Resolution Copper project in Oak Flat, Arizona, due to its human and environmental impact. Oak Flat is sacred for indigeneous Apache people and

is also ecologically important. Jacques answer was that the project is making progress, that they have reduced the proposed size of it, and that it uses 14 times less water than what is used by local communities.

On factchecking Rio Tinto’s answer, Roger (left) said that the amount of land to be used is in Tonto National Forest’s Draft Environmental Impact Statement, and that the company’s estimate of the water the mine would use is unbelievably lower than other copper mines around the world.

Theonila Roka Matbob from Bougainville was not able to come to London and was also not able to be part of the shareholders’ call, because of the lack of mobile and wifi coverage on the island, and, while Eryck was on the call, he was not asked to speak. The lack of community and civil society voices on the call and with us in London to speak directly to Rio Tinto has been disappointing. Theonila spoke to Human Rights Law Centre in the weeks before the meeting though, to say: 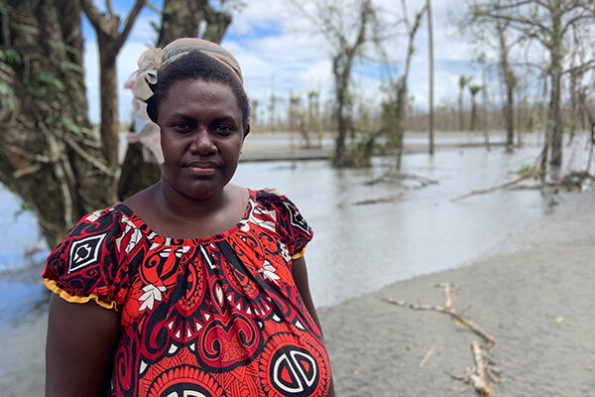 “The Panguna mine devastated our communities physically and culturally and we are still living with the consequences. Our land is destroyed and our rivers are poisoned. Kids are drinking and bathing in the polluted water and getting sick. New areas of land are still being flooded with the waste from the mine. We urgently need Rio Tinto to come back and deal with these problems so our communities can find healing.”

Our full report on the AGM will be published in the coming days.