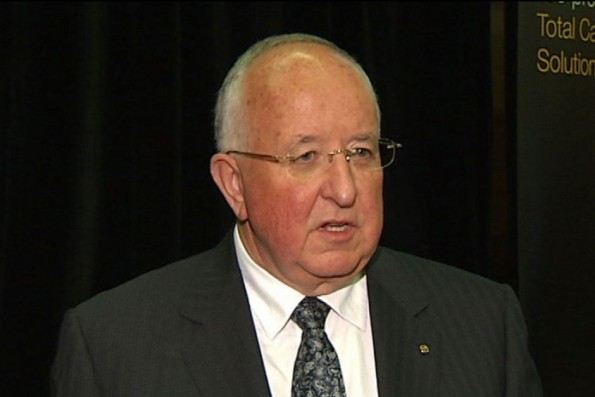 If you are a parent and your children find it difficult to go off to sleep at night, you may consider asking Sam Walsh to read them a bedtime story. A few paragraphs would surely suffice to send them into a deep sleep. Never mind that he might be reading them some traditional fairy story with a horrendously amoral story line full of self-interest and destruction – there is something soporific in the quality of his delivery. (It was much the same at last year’s AGM.)

And there is a close parallel between the subject matter of traditional fairy tales and the things he told us about at Rio Tinto’s London AGM today: accounts of operations full of environmental destruction and potential destruction, full of social dislocation and community anger. But he told us in such a soothing manner!

And as  it was his farewell message to shareholders – he is retiring as Rio Tinto’s Chief Executive Officer (CEO) on 1 July – in a sense he was indeed saying goodnight to the children.

Appendix 2: Questions we did not get time to ask
On uranium exports to India

I see that Rio Tinto considers uranium to be an opportunity with regard to alternative energy resources. But uranium is associated with nuclear weapons as well as nuclear power. The two go hand in hand. Are you not concerned about selling uranium to India, considering that it has never signed the nuclear non proliferation treaty and, together with its neighbour Pakistan, is increasing its nuclear missile arsenal?
On worker fatalities
Health and safety performance is of critical significance to both Rio Tinto workers and shareholders. Rio Tinto says that health and safety is a core priority for the company and claims that its health and safety performance has improved dramatically in recent years.
It is difficult to understand how that could be the case given that worker deaths at Rio Tinto continue. Rio Tinto says it has a “zero fatalities” policy. However in 2015 the company had at least 7 fatalities in 6 different countries at worksites it either operates or at which it has significant investment and considerable influence.
My question is, how does Rio Tinto explain the disjuncture between a zero fatalities policy and ongoing deaths in so many places around the world? Second, as at least 3 of the 7 workers fatally injured at Rio Tinto worksites in 2015 were contract workers, has the company investigated whether there’s a relationship between contracting practices and health and safety performance?
On bauxite mining at Weipa in Australia
Mr Chairman, my questions relate to bauxite mining, especially at Weipa in northern Queensland. In the light of expansion plans for the mine, it is worth recalling how in 1957 the Queensland government sequestered over 2000 square miles of Aboriginal lands for bauxite mining. Regarding this, the well respected campaigning journalist Jan Roberts (who sadly died earlier this year) quoted in her book ‘Massacres to Mining’ a report from 1963 that “people were forcibly removed and their settlement burnt down”. In 1976, it was reported in the Melbourne Age, “acres of dead craters unrelieved by a single living thing … traditions have disappeared and alcohol has wreaked havoc … The Weipa operations have caused alarm in every Aboriginal community throughout the north of Australia.”
Following the approval for expansion of the Weipa mine in November 2015, within a week ABC News reported on the destruction of trees in the area: “for four years the traditional Wik land owners have fought the company to stop it burning …” and “Cape York traditional owners urge Rio Tinto to prevent ‘heart-breaking waste’ of timber.”
These reports run counter to the assurances proffered by the Chairman and Chief Executive in their opening and subsequent remarks.
So my questions Mr Chairman are:
– what plans does the company have for reparations to indigenous peoples?
– can you or the Chief Executive quantify the number of trees planted at Weipa for each of the previous five years, and how many mature trees have been or will be burnt as part of yours planned extension?
On Bougainville Copper Limited and the Panguna Mine
I’d like to ask 3 questions seeking to clarify Rio’s position with respect to its majority shareholding in Bougainville Copper Limited and with respect to Rio’s intention to re-open or not re-open the Panguna Mine on Bougainville.
By way of context, in August 2014 Rio announced a review into its investment in BCL, but as of today has not yet completed or reported on that review.
My own review, with colleagues, of publically available information, as well as the findings reported by other analysts, suggests that the re-opening of the Panguna Mine has no strong business case.
Furthermore, well researched reports published by civil society show wide-spread opposition to a re-opening of the mine.
President of the Autonomous Bougainville Government, John Momis, has clearly stated the ABG position on BCL, both to Rio officers in February 2016 in Singapore and to the Bougainville House of Representatives on April 5th.  The stated ABG position is that if Rio decides to end its investment in BCL:
(i) “there must be equity transfer to the ABG and landowners without any payment” and
(ii) “Rio must take full responsibility for an environmental clean-up and for dealing with other major mine legacy issues.”
In the light of this context, I ask:
1.  Does Rio intend to retain its investment in BCL and does Rio intend to re-open the Panguna Mine?
2.  If not, how does Rio intend to dispose of its BCL shareholding?
3.  Has an estimate been made by Rio of potential clean-up and compensation costs?  What contingency has Rio made to cover these potential costs?