Reflection of the Rio Tinto AGM in London, 16 April 2015, by Richard Solly, Co-ordinator, London Mining Network.
I can’t say I attend mining company AGMs because I enjoy them. They are a kind of liturgy in the Temple of Money, where the worshippers make their obeisance to the Golden Calf. I can’t share in their devotion.
But they are also an opportunity to cry out against the multiple injustices perpetrated by enormous corporations against communities, workers, ecosystems and our common future.
Jan du Plessis, Chairman of Rio Tinto, has perfected the art of keeping order by allowing everyone to have their say. He is always polite, says that he values people’s contributions and will look into their concerns. He offers dialogue, respect…
Meanwhile, Sam Walsh fits the mould of the Techno-CEO whose role at AGMs appears to be to attempt to bore people into a state of catatonia.
Then there are those shareholders who appear to be able to listen to complaint after complaint from communities and workers and still raise questions about how much money they ought to be making, seemingly unmoved by the human suffering they have just heard about.
This year, we heard two statements from the Board that particularly caught my ear. One was Sam Walsh’s statement that the transfer of the company’s uranium operations to its diamonds division was ‘arbitrary’. The other was Jan du Plessis’ admission that our old friend Roger Moody, fighter against Rio Tinto for over three decades, had reached ‘the limit of [their] knowledge’ about Rio Tinto’s dealings with Ivanhoe over the Monywa mine in Burma.
In both cases, I felt refreshed by their frankness, but disturbed by its implications.
As the great Canadian Cree folk singer and rock star, Buffy Ste-Marie, used to sing, “Uranium burns a hole in forever – it just gets out of control.” You’d have thought that digging up a mineral whose toxic radioactive legacy will remain dangerous for hundreds of thousands of years might warrant decisions which are not simply ‘arbitrary’.
And you’d have thought that the publication by Amnesty International in February of a weighty report about human rights violations around the Monywa mine, and the public suggestion that Rio Tinto may have been implicated in violation of sanctions against Burma, might have encouraged senior management to extend their own knowledge of the subject so that it rivalled that of our friend Roger – if such a thing is possible.
But the other issues raised by our friends from around the world were just as important.
Indigenous Innu representatives from Quebec accused the company of violating Innu land rights and announced that they want the company to pay the rent on Innu land taken without Innu consent for iron ore mining. Roger Featherstone of the Arizona Mining Reform Coalition accused the company of violating Apache Indigenous rights in the USA at its Resolution Copper project, planned for construction on an Apache sacred site.
Concern was expressed about the company’s continuing coal production, which it shows no intention of ending, despite admitting the damaging impacts of coal use on the climate.
The scandal of worker deaths was raised repeatedly in connection with the company’s operations in Madagascar, South Africa and West Papua.
Indeed, the whole way Rio Tinto treats its workers was the subject of the first intervention in the AGM’s Q and A session, when Kemal Ozkan of global mining union IndustriALL stood up, accompanied by representatives of affiliated unions from Australia, Canada, France, India, Indonesia, Madagascar, Mongolia, Namibia, the Netherlands, South Africa, the UK and the USA, and denounced the company for what he said was its disrespect and arrogance towards its workers.
Little surprises me any more about Rio Tinto’s attitude to the workers and communities affected by its operations. But this year’s AGM was actually a sign of hope. Rarely have we had so many delegates, from so many places, drawn together by their common outrage at the behaviour of one company, connecting directly with one another and sharing their stories, strengthening one another with the power of solidarity, the power of knowing none of us is alone in this struggle.
Company AGMs are an important moment to raise awareness. But it is through actions on the ground, by workers and affected communities, that companies such as Rio Tinto are compelled to change their behaviour. When communities have the chance to connect directly with each other, and when alliances can be forged between them and mine workers, you never know what impact they could have. And last week’s AGM was a step forward in making those connections.
There is a full report on the AGM at https://londonminingnetwork.org/2015/04/rio-tinto-agm-workers-of-the-world-unite/ and a webcast at http://edge.media-server.com/m/p/q5xxmtf6.
Below are photos from the protest outside the AGM. Click for high resolution versions. Feel free to use any, with credit to London Mining Network. 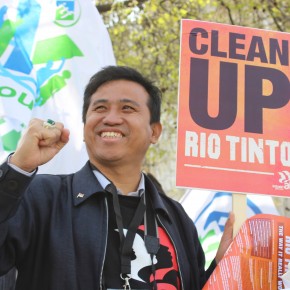 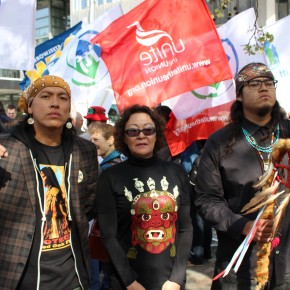 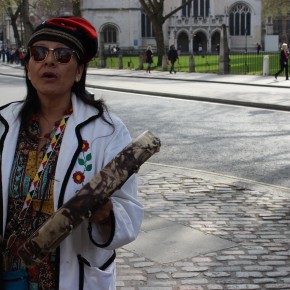 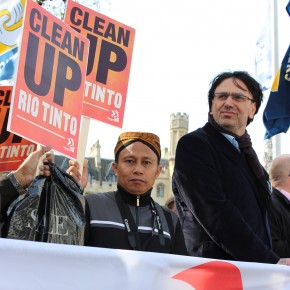 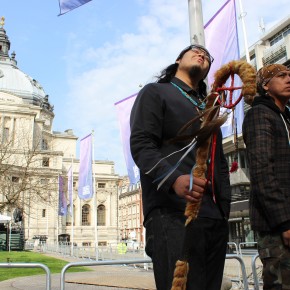 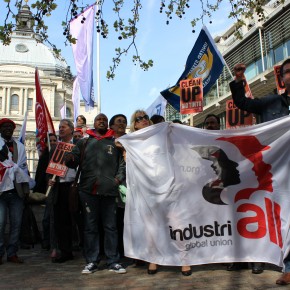 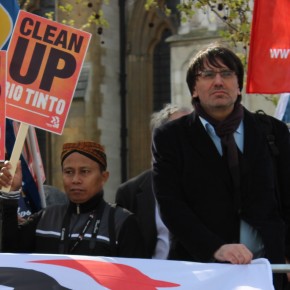 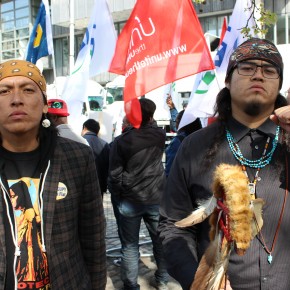