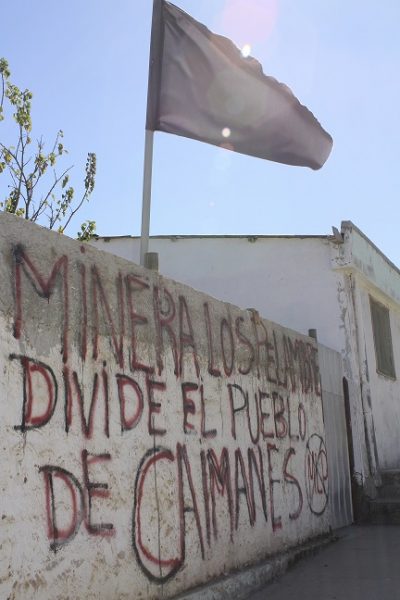 The community of Caimanes is taking fresh legal action against Minera Los Pelambres, a mining company controlled by Antofagasta Minerals (the Chilean subsidiary of London-listed Antofagasta plc) over the situation of the Mauro tailings (fine wastes) dam above the small town.

APEC (the organisation for Asian-Pacific Economic Cooperation) held a Mining Week from 5 to 9 August in Santiago, Chile. The Caimanes Defence Committee took the opportunity to announce the filing of a lawsuit against Antofagasta Minerals, owner of 60% of the Pelambres mine.

At the APEC meetings, the company said that the Mauro tailings dam meets international standards.

One seminar focused on mining sustainability and tailings disposal in Chile. Presentations focused on the main challenges that exist in mining and on new technologies to curb environmental effects and improve tailings treatment.

During the week, the Committee for the Defence of Caimanes presented the legal action against Minera Los Pelambres. It included a claim for compensation for moral damage.

The Caimanes Defence Committee also announced that they would organise a caravan heading from the town to the city of Illapel, where they hoped to meet with the Governor of Choapa, Juan Pablo Galvez, to whom they were to deliver a letter explaining the situation and the claims for which they are fighting.

“We hope to meet with the leading provincial authority and, as what we did in Los Vilos, we seek to gain support and to sensitize the authorities to the environmental problems we are suffering,” said Claudio Villalobos, a member of the Committee.

The lawyer of the Committee, Esteban Vílchez, detailed the main problems that communities currently face as a result of the conditions of the Mauro dam.

During his presentation at APEC, the president of Executive of Antofagasta Minerals, Iván Arriagada, affirmed that there should be transparency from multinational companies in identifying the impact of mining on the environment and that they should work with communities to identify remedial actions.

He denied that there are any legal actions against Antofagasta Minerals over the Mauro dam.

For his part, the Chilean government’s Undersecretary of Mining, Ricardo Irarrázabal, said that “it is necessary to conduct a risk assessment of tailings and the health of the population.”