Environmental campaigners will present alternative awards including the ‘ruthless destroyer award’ to mining executives as they arrive at London’s prestigious ‘Mines and Money’ Gala Dinner in London this Tuesday.

The awards will seek to highlight the struggles of countless communities in the Global South who have been forcibly evicted from their homes as mining companies rip up their lands for fossil fuels, minerals and metals and render further areas uninhabitable through the dumping of toxic mining waste.

The Alternative Awards Ceremony will be held outside the Honorary Artillery Company Building in City Road, EC1Y 2BQ, from 6-8.30pm on Tuesday 26th November, (meet at 6pm at Nincomsoup cafe in Old Street Underground Station to walk together to The HAC. Or feel free to meet us at the venue), jointly organised by London Mining Network and Global Justice Rebellion. 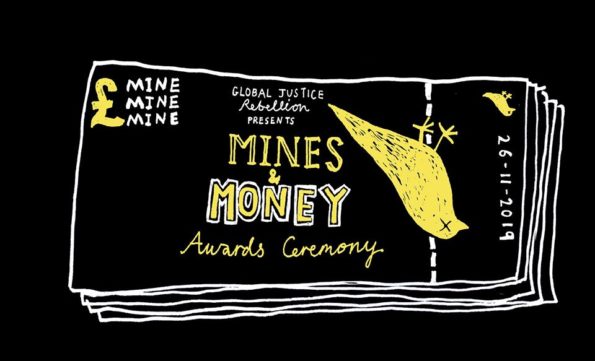 Richard Solly of London Mining Network said: “The mining industry is responsible for a quarter of global carbon emissions, large-scale forced eviction of indigenous communities and the contamination of large areas of land and water.

“Executives of mining corporations meeting in London, the global hub of mining finance, will be presented with awards and accolades for their neo-colonial mining operations in the Global South, which devastate communities and the land and livelihoods upon which people depend. Companies are increasingly greenwashing their operations to improve their climate credentials, when they are the ones contributing massively to climate breakdown.”

In addition to the alternative awards ceremony there will be speakers highlighting the damage the mining industry is causing across the globe.

Many of the world’s most ecologically damaging and rights-violating companies shortlisted for awards at the Mines and Money Gala dinner are listed on the London Stock Exchange.

The CEO of British-Australian mining company BHP, Andrew MacKenzie, has been nominated CEO of the year, yet the company he directs has been responsible for an estimated 9.80 billion tonnes of carbon emissions since 1965, and is a major contributor to global temperature rises.

Other corporations nominated for awards at the Gala Dinner include UK multinational Anglo American for Mining Company of the Year, sued by 4,000 South African mine workers in 2018 for working conditions that led to their silicosis, and British-Australian Rio Tinto for Innovation in Sustainability, which has cut and run from its mining operations in Grasberg, Bougainville and Indonesia, leaving grave ecological messes behind.

The event will be visually striking with fake awards and dressed up award presenters, people dressed up to parody oil executives and participants with fake canaries evoking the image of the ‘canary in the coal mine’.

London Mining Network holds London-based mining companies to account by working closely with mining-affected communities. It conducts research on mining and alternatives, and works to make issues of extractivism more relevant through education, outreach and events.