It’s nice to be important but it’s more important to be nice: lessons from the Anglo American AGM 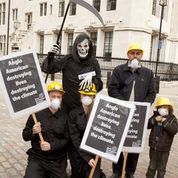 Protesters gather outside the Anglo American AGM. Photo: Amy Scaife/London Mining Network
Report on the Anglo American AGM, Queen Elizabeth II Conference Centre, Westminster, Friday 19 April 2013
Richard Solly, Co-ordinator, London Mining Network
One positive thing you can say about Anglo American AGMs is that criticisms of the company’s human rights and environmental record generally get a hearing. It’s generally a polite hearing, too. But this year’s AGM made crystal clear the difference between simply being polite and being REALLY nice. There is no doubt that Anglo American is awfully important – it is big, and very rich, and has many influential friends. Wouldn’t it be good if it actually treated people and places with the respect it says it has for them? But by contrast, what emerged from the company’s responses to concerns raised at its AGM by visitors from South Africa, Colombia and Alaska were the following: 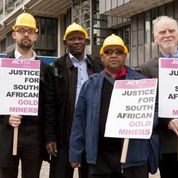