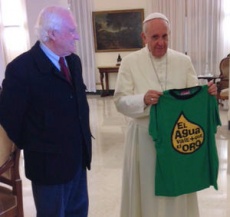 Mountains of Faith? Church takes on large-scale mining
Faith and large-scale mining have something in common: they both move mountains. On many occasions, the Church has been an obstacle to industry’s efforts to expand into Latin American countries. A growing movement links spirituality, environmental struggles, and resistance to large-scale mining. Article by Luis Claps of Mines and Communities.
See http://www.indcatholicnews.com/news.php?viewStory=23736.
Peru: Open letter on destructive mining in Latin America
César Correa, the Justice Peace & Integrity Of Creation Co-ordinator in Chile for the Missionary Society of St Columban recently participated in a meeting on mining in Latin-America, held in Lima, Peru. The gathering involved Catholics concerned about this issue from throughout Latin America. The group produced the following declaration at the end of the meeting, amidst wide-spread concern about destructive mining in the continent.
(The Missionary Society of St Columban in Britain is a member group of London Mining Network.)
See http://www.indcatholicnews.com/news.php?viewStory=23759.
Operation Noah questions CoE ‘green’ investment policy
The Church of England’s Ethical Investment Advisory Group (EIAG) has shown itself to be biased and ill-informed when it comes to fossil fuel disinvestment, according to ecumenical Christian campaign group Operation Noah.
See http://www.indcatholicnews.com/news.php?viewStory=23790.